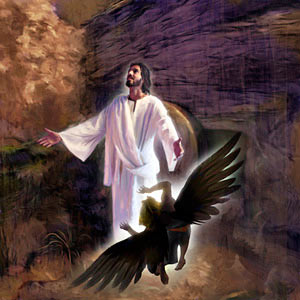 What is black liberation theology?

In this book author Reggie L. Williams follows Bonhoeffer as he defies Germany with Harlem’s black Jesus. The Christology Bonhoeffer learned in Harlem’s churches featured a black Christ who suffered with African Americans in their struggle against systemic injustice and racial violence—and then resisted. In the pews of the Abyssinian Baptist Church, under the leadership of Adam Clayton Powell, Sr., Bonhoeffer absorbed the Christianity of the Harlem Renaissance. This Christianity included a Jesus who stands with the oppressed rather than joins the oppressors and a theology that challenges the way God can be used to underwrite a union of race and religion.

Bonhoeffer’s Black Jesus argues that the black American narrative led Dietrich Bonhoeffer to the truth that obedience to Jesus requires concrete historical action. This ethic of resistance not only indicted the church of the German Volk, but also continues to shape the nature of Christian discipleship today.

The Oppression of Black Liberation Theology

Black liberation Theology is even more extreme. This theology was used by Marxist regimes to take over churches in Africa and Central America. They use “Christian” terminology they promote violence to overthrow governments and populations. It especially became popular in Nicaragua in the 1980’s with the pro-sandanista dictatorship. It used Marxist strategies to be an impetus for the people to rebel where violent revolution was used. In some churches Jesus was represented as Sandinista soldier identifying with the oppressed.

In this theological framework Jesus becomes a liberator of the oppressed masses which are black. This is in contrast to the word faith prosperity message preached by numerous black pastors today. Black Liberation theology describes Jesus as a poor black man who lived in oppression under “rich white people” which makes this particular view racially based, accentuating the tensions of being Black. The notion of “Blackness” is not merely a reference to skin color, but rather is a symbol of oppression that can be applied to all persons of color who have a history of oppression (except Whites, of course).” [“Wright’s Black Liberation Theology” By Anthony B. Bradley assistant professor of theology at covenant theological, March 25, 2008]

By using Isa.61:1 which Jesus quoted in Luke 4 to explain his ministry, they make their case for liberating the oppressed. They isolate verses like this and breathe exaggerations into them.

Authentic Christianity transcends race and ethnicity. There is no black or white cultural value system in the Bible- there is a humanity system, recognizing that we are all made in the image of God, being sinners in need of redemption the same way- through Jesus Christ.

To those who espouse this worldview and philosophy white greed is the problem (I didn’t know greed had a particular color attached to it). This theology embraced Marxism/humanism as the vehicle to correct the wrongs of the white oppressors. Marxism which is the very opposite of Christianity in its application. So it is not a marriage made in heaven. This theology is not found in the mainstream of the church but is on the fringe. Even the Vatican has condemned it twice. It has recently been publicized in the media because of the controversial statements of Rev. Wright, the pastor of presidential candidate Barak Obama.

This church is a black nationalist church that is promoting “Black liberation Theology.” Jeremiah Wright credits James Cone as being a founder of “Black Theology” which Wright said forms the foundational beliefs of Wrights church. At best, their position is Black nationalism, in its extreme it is something to be concerned about. When Sean Hannity interviewed Rev. Wright on his program Hannity and Colmes, Rev. Wright repeatedly challenged Hannity saying: “Black liberation theology started with Jim Cone in 1968… Do you know liberation theology?” he was very defensive and continued to scold Hannity, … How many books of Cone’s have you read? How many books of Cone’s have you read?” (Rev. Jeremiah Wright, explaining his Church to Sean Hannity, Fox News 3/1/07).

Let’s look at what Cones Black liberation Theology actually teaches. James Cone is one of the leading voices of this theology, he wrote that the United States was a white racist nation and the white church was the Antichrist for having supported slavery and segregation.

Cone: “The ‘raceless’ American Christ has a light skin, wavy brown hair, and sometimes – wonder of wonders – blue eyes. For whites to find him with big lips and kinky hair is as offensive as it was for the Pharisees to find him partying with tax-collectors. But whether whites want to hear it or not, Christ is black, baby, with all of the features which are so detestable to white society” (J. H. Cone, “The White Church and Black Power,” in G. S. Wilmore and J. H. Cone, Black Theology: A Documentary History, 1966-1979 (Maryknoll, NY: Orbis, 1979), pp.116-17.)

Today, Cone is a professor at Union Theological Seminary in New York, he stands by that view, but clarifies that he doesn’t believe that whites individually are the Antichrist.

Cones Black theology and Black power is the treatise for many involved in this worldview. On.p.31 “a theology whose sole purpose is to apply the freeing power of the gospel to black people under white oppression” This would be like the Jewish apostles keeping the gospel to only Jews under the Roman jurisdiction.

Cone: “Black theology refuses to accept a God who is not identified totally with the goals of the black community. If God is not for us and against white people, then he is a murderer, and we had better kill him. The task of black theology is to kill Gods who do not belong to the black community. Black theology will accept only the love of God which participates in the destruction of the white enemy. What we need is the divine love as expressed in Black Power, which is the power of black people to destroy their oppressors here and now by any means at their disposal. Unless God is participating in this holy activity, we must reject his love.” (James Cone, quoted in “Divine Racism: The Unacknowledged Threshold Issue for Black Theology,” by William R. Jones in African-American Religious Thought: An Anthology, edited by Cornel West and Eddie Glaube (Westminster John Knox Press).

Ancient Hebrew concept of the Universe Joshua 10:12 ► On the day the LORD gave the Amorites over to Israel, Joshua said to the…