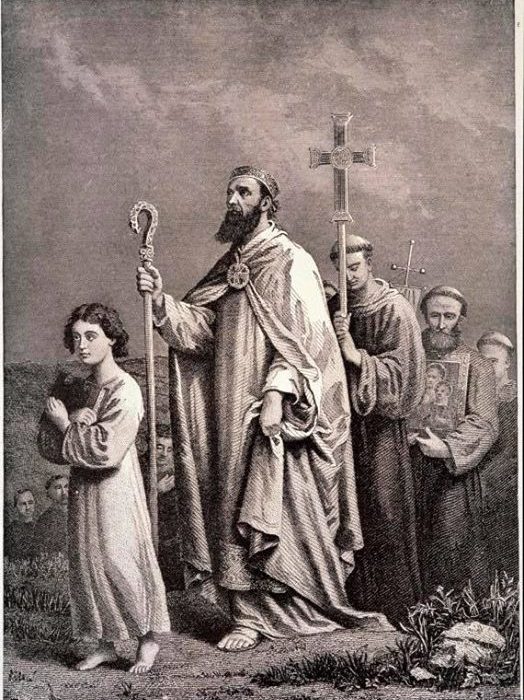 Read to the end to see if Patrick was Pentecostal

“A few years later I was again with my parents in Britain. They welcomed me as a son, and they pleaded with me that, after all the many tribulations I had undergone, I should never leave them again. It was while I was there that I saw, in a vision in the night, a man[Nota] whose name was Victoricus coming as it were from Ireland with so many letters they could not be counted. He gave me one of these, and I read the beginning of the letter, the voice of the Irish people. While I was reading out the beginning of the letter, I thought I heard at that moment the voice of those who were beside the wood of Voclut, near the western sea[Nota]. They called out as it were with one voice: “We beg you, holy boy, to come and walk again among us.” This touched my heart deeply, and I could not read any further; I woke up then. Thanks be to God, after many years the Lord granted them what they were calling for.

24
Another night – I do not know, God knows, whether it was within me or beside me[Nota] – I heard authoritative words which I could hear but not understand, until at the end of the speech it became clear: “The one who gave his life for you, he it is who speaks in you”; and I awoke full of joy.

25
Another time, I saw in me one who was praying. It was as if I were inside my body, and I heard above me, that is, above my inner self. He prayed strongly, with sighs. I was amazed and astonished, and pondered who it was who prayed in me; but at the end of the prayer, it was clear that it was the Spirit. At this I awoke, and I remembered the apostle saying: “The Spirit helps the weaknesses of our prayer; for we do know what it is we should pray, but the very Spirit pleads for us with unspeakable sighs, which cannot be expressed in words[Nota].” And again: “The Lord is our advocate, and pleads for us[Nota].”

FacebookTwitterSubscribe
Subscribe to receive all news to your email or phone: [wysija_form id="1"]
patrickpentecostalst

FREE Crisis Intervention and Supportive Services for #Chattanooga Attention CAPA Members! In response to the recent shootings in Chattanooga on Thursday of this week,…