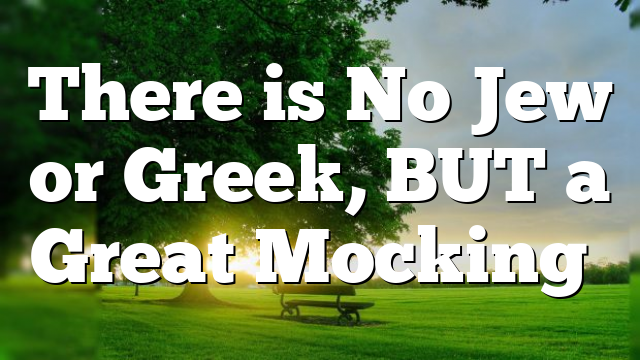 There is No Jew or Greek, BUT a Great Mocking Bird

23 But before belief came, we were being guarded under Torah, having been shut up for the belief being about to be revealed. 24 Therefore the ***Torah became our trainer unto Messiah, in order to be declared right by belief.*** 25 And after belief has come, we are no longer under a trainer.(Now we know the Torah pointed to the righteousness of the Messiah) 26 For you are all sons of Elohim through belief in Messiah יהושע. 27 For as many of you as were immersed into Messiah have put on Messiah. ***28 There is not Yehuḏi nor Greek, there is not slave nor free, there is not male and female, for you are all one in Messiah יהושע.***

Notice v28… then notice the Mocking Bird/Satan and his ‘church+state’ powers: Rev 13: 16 And he causes all, both small and great, and rich and poor, and free and slave, to be given a mark upon their right hand or upon their foreheads, 17 and that no one should be able to buy or sell except he that has the mark or the name of the beast, or the number of his name.

The people are being put ‘under the law’ of Satan through ‘Church & State’! Their False Worship System! Through deceit along with ‘climate change’, the people will worship after the beast’s Sunday False Sabbath to save their paycheck and ‘thinking’ it will ‘save the planet’!

MANY Christians today CONDONE what The Bible CONDEMNS

“Too many Christians today CONDONE what The Bible CONDEMNS!” This is a line from my blog “Transformed: New Heart, New Spirit, New Creature” It…