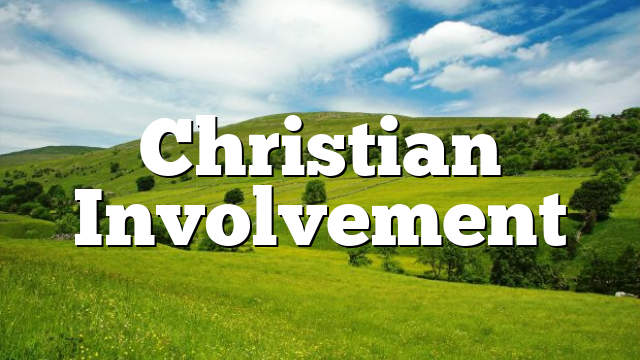 “No one engaged in warfare entangles himself with the affairs of this life, that he may please him who enlisted him as a soldier” (2 Tim. 2:4).

I have noticed that many Christians point to this verse to justify insistence in non-involvement of believers with politics and the issues of this world. I believe they are very wrong. So, let’s take a closer look.

We cannot, must not, avoid being involved in the world, just not entangled in its ways. We need to be an influence for Christ.

The key word for us, I believe, in 2 Tim. 2:4 is “entangle.” It’s the Greek word “empleko,” meaning to inweave or entwine. So, it seems to me to mean more than simply “involvement.”

We live in the world but are not of the world. We are ambassadors here. Like Jesus, we are to love the world, but not the ways if the world. As such, we cannot, must not, avoid being involved in the world, just not entangled in its ways. We need to be an influence for Christ.

I do not believe “political involvement” is contrary to scripture, as long as it is not entanglement. I believe we are to take a stand on issues and support elected official’s good positions, as long as that does not entrap us.

Support God’s way, not the party’s

While I generally vote Republican and consider my political leanings as Conservative, I am bound to neither. I try to be supportive of positions that I see as right from a Biblical perspective.

That being said, I am sure that so-called “activism,” depending on how it is defined, can very well be “entanglement” and a distraction from our godly witness.

Christian Persecution Has Never Been Worse

Christian Persecution Has Never Been Worse Roger Wilkinson [06/24/2015 6:05 PM]Well I pray they have not been taught they will get raptured out of…