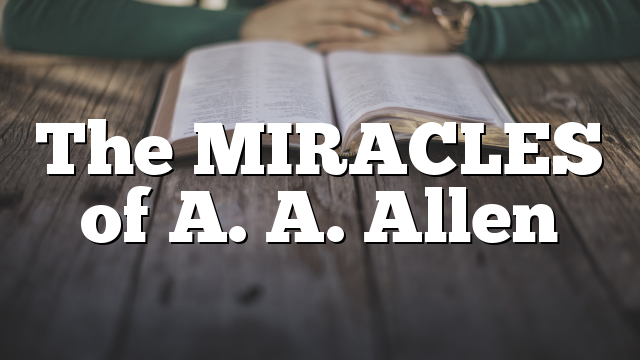 A. A. Allen was bold and outgoing. His television commercials professed, “See! Hear! Actual miracles happening before your eyes! Cancer, tumors, goiters disappear! Crutches, braces, wheelchairs, stretchers discarded! Crossed eyes straightened! Caught by the camera as they occurred in the healing line before thousands of witnesses.”

To be sure, Asa Alonzo Allen was one of the most heralded evangelists in the Voice of Healing Movement. The miracle man was incredibly gifted, dramatic – and controversial. A. A. Allen was also a type of apostolic forerunner. Religious enemies launched so many attacks against A. A. Allen that he felt he was surely one of the most persecuted men in ministry just because signs, wonders, and miracles followed him. But A. A. Allen thrived under pressure and refused to back down from his calling.

One of the most publicized attacks on A. A. Allen was his 1955 arrest for drunk driving in Knoxville. While he never stood trial and forfeited his bail, Miracle Magazine, his ministry publication, did publish a formal response to the accusations. The magazine said the allegations against A. A. Allen was nothing more than “a trick of the devil to try to kill his ministry and his influence among his friends at a time when God has granted him greater miracles in his ministry than ever before.” Although many still wonder to this day what happened in Tennessee, A. A. Allen’s one-time praise and worship leader, Reverend R. W. Schambach, disputed the allegations, explaining that he was riding with A. A. Allen in the car that fateful night and proclaiming his sobriety.

The controversy, however, did not completely die and A. A. Allen would soon find himself on the road with very little denominational support. Even Assemblies of God, his fellowship of 18 years, asked him to withdraw from public ministry until the matter was resolved. In A. A. Allen’s view this was an abandonment during his great time of need and left him feeling deeply hurt, but he did not back down from his convictions. He felt that withdrawing from public ministry because of a false accusation would hinder God’s work and give the appearance of guilt. So instead he surrendered his ordination papers and launched out on his own.

A. A. Allen was used to being on his own. Born in Sulphur, Ark. in 1911, he grew up in poverty, hard work, a heavy-drinking father, and a mother who lived with several different men. His life took a dramatic turn when he was filled with the Holy Ghost in 1934, and he was shortly after that launched into his preaching ministry through the Assemblies of God church. Bringing revival during the Great Depression was tough for an evangelist, but God’s grace and A. A. Allen’s inner fortitude empowered him to keep preaching the Good News. By 1947 A. A. Allen left the harvest fields to settle down as pastor of a small church in Corpus Christi, Texas. Two years later, A. A. Allen attended one of Oral Robert’s tent meetings in nearby Dallas. He was awe-struck by the impact of Roberts’ revival meeting and was convinced that a great renaissance was underway as he witnessed miracle after miracle. He was sure that the Spirit of God was moving across the land with great power displays and left the meeting with a renewed passion to reach the lost with God’s miracle-working power. He asked his church board to allow him to start a radio program. They refused, which seemed to greatly discourage A. A. Allen. Still, with true apostolic grit, A. A. Allen followed the Spirit of God and broke through the barriers imposed by man. He resigned from pastoring to hit the Gospel road again. It was at this point that A. A. Allen started the Healing Revival Campaigns that would bring him so much persecution from religious spirits.

A. A. Allen was keen at summing up what people were hungering after, and during his crusades, he was known as a revivalist who never ran from the hard cases. Much like King David drew the indebted, distressed and discontented, A. A. Allen drew the poor because he could relate to their needs and encourage them with Gospel hope. A. A. Allen had seen the great crowds gather under Oral Roberts’ gigantic tent and in 1955 made a bold move of faith to purchase this tent for $8,700. It was way beyond his natural abilities to pay for, but with God’s blessing, he entered the golden era of tent evangelism with a healing theme. It marked another turning point for this determined man of God as thousands began gathering under his tent. Many traveling evangelists of his day had their special niche and A. A. Allen was no different; he had an incredible ability to set the stage of service through music like no other in his time.

A. A. Allen was one of the first ministers, along with Oral Roberts, to open his revival meetings up to interracial crowds. This, of course, created a different kind of persecution, but A. A. Allen would use it as a platform to stand on and preach from. More persecution would come when he began in the mid-1950s to urge Pentecostal ministers to establish independent churches that would be freed of denominational controls. A. A. Allen felt that programs had replaced the old wooded altars and that the denominations were limiting what the Spirit of God was trying to do in the Body of Christ. He once said, “With few exceptions, the churches today are leaning more and more toward dependence upon organizational strength, and natural ability, and denominational methods. They no longer expect to get their increase through the old-fashioned revival altar bench, or through the miracle-working power of God, but rather through the Sunday school.

A. A. Allen purchased Jack Coe’s tent after Coe went home to be with the Lord in 1956. Coe’s tent sat more than 22,000 and was one of the largest tents in the world. Then came another turning point in his ministry – The Voice of Healing Movement began to dwindle. Nonetheless, A. A. Allen was a master at raising the financial support he needed to keep the ministry moving forward. He was one of the first ministers to confront the “spirit of poverty” and believed in God’s ability to perform “financial miracles.” His teaching on prosperity was a major theme in his meetings during the 1960s. At the height of his ministry, Miracle Magazine had more than 340,000 subscribers. A. A. Allen was preaching in major cities and auditoriums across the country, heard on the radio, and authored many cutting edge books.

A. A. Allen was found dead sitting in a chair in front of a television set in the Jack Tar Hotel in San Francisco on June 11, 1970. He was only 59 years old. Though he’s gone, this apostolic forerunner touched thousands of lives – many of which are still around today to testify to the miracle-working power of God that flowed through him.

Regardless of what some think about A. A. Allen, will not take away that he was truly apostolic by going first in many things. He was one of the first to birth a national television ministry and the first to air deliverance from demons and prophecy. His Holy Ghost rallies would see 12,000 people receive the baptism of the Holy Spirit in a single service. A. A. Allen also helped pioneer revival in the Philippines, where he repeatedly preached to more than 50,000 people during each service. He built Miracle Valley Bible College and planted more than 400 churches.

Book on “Prophecy” by Bruce Yocum