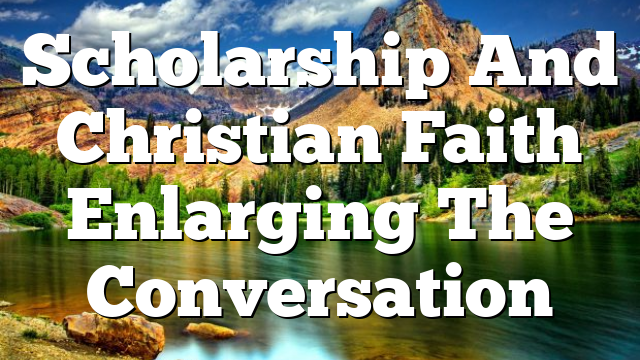 “Wonder and Scholarship”: Reﬂecting on Jacobsen and Jacobsen’s Scholarship and Christian Faith: Enlarging the Conversation

Widening the conversation between scholarship and faith as well as between learning and hope and learning and love is an intellectual pur- suit necessary in order to advance knowledge. Through the active partic- ipation of Pentecostals of all races in this project, the Christian scholarship movement and Pentecostalism would be enriched. The Jacobsens are to be commended for crafting the ﬁne dialogue that constitutes their volume.

Is it possible to go beyond Otherness as a concept to construct dis- cursive space for heterogeneity and pluriformity by accenting intersections, intermingling, or interpenetrations? Here the scholarship of Roger Bastide, Eugene Genovese, Mechal Sobel, and Judith Weisenfeld would be illus- trative. While these scholars acknowledged difference in their work, the focus is on what is being constructed as a result of the intersections of

these two or more discourses or communities. Central is what is generated by the intersections, such as the widening of the discourse. Thus the het- erogeneity of scholarship is deepened.

The participation of African American Pentecostals in the further development of the Christian scholarship movement would seek to inter- rogate the “existing vocabularies” and “expanded metaphors” alongside enhanced strategies that would “enrich Christian scholarship” in order, as Sawatsky suggests, to yoke “hope and learning” so that Christian schol- arship will aim “not only to understand and to celebrate as it is but also to participate in God’s work of restoring and transforming the world.”

The emancipatory project most likely challenges the integration of faith and learning. Each of the deﬁnitions of integration noted in the book would be considered suspect because they lack emancipatory commit- ments. Ian Barbour utilizes weaving as a metaphor and vision/worldview as the frame, contending that “integration refers to the process of weav- ing the insights of faith and science into new, creative, and scientiﬁcally contemporary visions of God and the world.” George Marsden, drawing upon Ernest Boyer, employs truth as the frame, proposing a twofold task: “to critique the premises of modern learning when and where they directly conﬂict with Christian truth, and to discover the ways modern learning at its best might either reinforce or reﬁne the truths of faith.”

Pentecostal-based African American Christian scholarship could ﬁnd afﬁnity with Crystal L. Downing. Her project provides space for eman- cipatory commitments in proposing imbrication as a metaphor in place of integration. Imbrication entails “overlapping discourses that make up the self” and “registers awareness that we are made up of multiple vocab- ularies, some of which overlap, others of which do not, but all of which are manifestations of the self.” She critiques the aim of integration as weaving or truth as modernist. Quoting Lyon and Beaty, she contends that integration valorizes “the autonomy of the individual, who within him- self melds faith and scholarship into a uniﬁed, almost monumental, form— like modernist architecture.” Further, she notes that it “autocratically” enforces the “conglomeration of peoples who were suddenly supposed to share a common vocabulary” and ﬁts “their [every] sensibilities into the dominant white discourse.”

Within black Pentecostalism, a fecund concept can be found in the texts of Charles Harrison Mason that could provide the rudiments of a Pentecostal paradigm of knowledge; this paradigm would advance Pentecostal-based African American Christian scholarship. For Mason wonder is more than curiosity, fascination, or discovery. Mason employs the term wonder to characterize the “how” of God’s dynamic activity: the divine act of creation, divine activity in creation, and God’s transfor- mative actions within human creatives. A Pentecostal paradigm of knowl- edge accenting wonder would support the Jacobsens in the quest to crack open space for “the real” to be present in the discourse. Drawing upon George Dennis O’Brien (following Jacques Lacan), the Jacobsens contend that “the real” is the “mysterious totality of life in all its messy, wonderful, and troubled complexity.” They then embrace Martha

Nussbaum’s distinction between the inability of “abstract, logical think- ing by itself . . . ‘to offer us the type of self-understanding we need’ because it cannot ‘grapple with the messy material of grief, love, anger and fear,’” and “upheavals of thought” or emotional eruptions, recognizing these emotions eruptions as “essential elements of human intelligence.” For Mason wonder would encompass the “real” in the self as well as the “real” in society with its “messy, wonderful, and troubled complexity,” and the “real” in nature with its catastrophes and cacophonies.

A Pentecostal paradigm of knowledge that accents wonder could also possess the potential to yoke Sawatsky’s “hope and learning” in order to intertwine understanding and celebrating with participating in “God’s work of restoring and transforming the world,” heightening the “communal dimension of scholarship” that is grounded in the “communally oriented” Christian virtues of love, reconciliation, and liberation. A Pentecostal par- adigm of knowledge that accents wonder is compatible with Downing’s imbrication metaphor as a substitute for integration because wonder is not exhausted by multiplicity, pluriformity, overlappings, or non- overlappings of vocabularies that are manifestations of the self and the world. Thus wonder, being akin to imbrication, would resist the con- glomeration of peoples as Downing notes.

A Pentecostal paradigm of knowledge that accents wonder could draw upon Bakhtin’s heteroglossia along with Land’s and Solivan’s orthopraxis and Loder’s transformations. The “divergent tongues—wherein the indi- vidual is deﬁned by the multiple vocabularies not only of, but also out- side of, the self, vocabularies that are constantly interrogating and qualifying the each other,” capture the dialogic and emancipatory dimensions of Pentecostal-based/oriented Christian scholarship. This would be supportive of a style that engages faith-love-hope and learning that is conversational, dialogical, cooperative, and emancipatory rather than argumentative and competitive, with a focus on imbrication. Equally ambitious is for Pen- tecostal-based/oriented Christian scholarship to function like a discipline, as characterized by Imre Lakatos, by containing its own research project/ program constituted by its set of “core theories,” “bodies of relevant data,” and “aesthetic criteria of plausibility and attraction.”

The widening of conversation of scholarship and faith-hope-love- liberation as an intellectual pursuit is vital if knowledge is to be advanced and the world changed. Confronting the sociological realities and dis- cursive parameter will assist in the establishment of Pentecostal-based African American Christian scholarship.

“As for those who persist in sin, rebuke them in the presence of all,
so that the rest may stand in fear.”