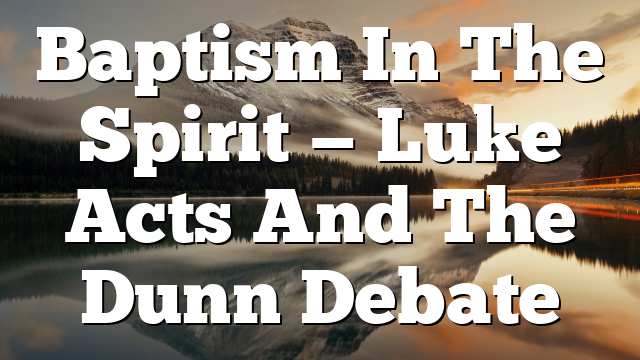 This book, as the title suggests, provides a summary and a critical analysis of the contribu- tion of various Pentecostal scholars to the debate generated by James Dunn’s Baptism in the Holy Spirit (London, SCM, 1970). In the opening chapter William Atkinson, himself a Pente- costal, introduces the key themes and main contributors to the discussion, pointing out the importance of the doctrine of the baptism in the Holy Spirit within Pentecostalism, the cen- trality of Luke-Acts to the debate, and the importance of Dunn’s contribution. A summary of Dunn’s exegesis of passages in Luke-Acts is then provided, viz. the anointing of Jesus, the day of Pentecost, the Samaritan reception of the Spirit, Paul’s conversion, Cornelius’ conversion, and the Ephesian outpouring. According to Atkinson, for Dunn baptism in the Spirit is “automatically co-incident with the cleansing of salvation”; Baptism in the Spirit is God’s act of salvation (15).

The second chapter offers an assessment of the criticisms of Dunn by Pentecostal respon- dents, including Roger Stronstad, Max Turner, Howard Ervin, David Petts, James Shelton, and Robert Menzies. Dealing first with Jesus’ reception of the Spirit, Atkinson finds that although Dunn’s critics have correctly identified Luke’s understanding as essentially an empowering to minister to others, they have handled less well Dunn’s contention that the Jordan marked Jesus’ entry into the new covenant. Here Atkinson offers his own criticism. He claims, there is no suggestion that Jesus even needed to be “ushered into the new cove- nant.” Jesus’ own explanation in Luke 4:18ff is sufficient. He adds, for Jesus’ followers too, the baptism in the Spirit was not entrance into the new covenant but the reception of power for mission (124).

With regard to the day of Pentecost, Dunn’s critics are right to dissociate the coming of the Spirit from mediation of the new covenant. Atkinson states convincingly that “Acts 1:8 must not be underplayed. The pivotal dominical statement towers over Acts 2 and over sub- sequent chapters of Acts, all of which must be read in this light” (124). Similarly Atkinson finds strong grounds for Pentecostal doctrine in Acts 8. He also insists that Acts 10 gives clear evidence that the Spirit’s arrival did not bring new covenant life, and that Luke’s record of Paul’s question in Acts 19:2 shows that for Luke belief was possible without reception of the Spirit.

However, in his third chapter, Atkinson finds that Pentecostal alternatives that radically separate baptism in the Spirit from Christian beginnings misrepresent Luke. Just as Acts 1:8 dominates the book pneumatologically, so does Acts 2:38. He rightly emphasizes that Luke expected new converts to receive the Spirit at or near the time of their baptism in water. The arrival of the Spirit enabled them to take an effective part in the evangelistic mission of the church. This included boldness, guidance, healing, miracles, and the capacity to engage in charismatic praise.

Nevertheless, Atkinson argues, the Spirit was not inactive prior to someone’s receiving Spirit-baptism. The Spirit could perform individual acts, such as granting a vision or opening a heart. “So the Spirit was soteriologically involved, but the Pentecostal reception of the Spirit was not soteriological: it was charismatic and missionary” (125). For Atkinson, this is important because it brings Luke’s understanding alongside other New Testament writers, a

subject he discusses in the following chapter. Here Atkinson compares Luke’s understanding with that of Paul and John. Summarised briefly, Atkinson understands that John allows for two distinct receptions of the Spirit whereas Paul and Luke speak of only one. But for Paul, the Spirit is received at conversion while for Luke Spirit-reception follows conversion.

With regard to Paul, he states: “Today’s best Pentecostal New Testament scholars do not argue with Dunn over his understanding of Paul; they simply understand that at this point Luke did not reflect Paul” (126). I found this section of Atkinson’s work to be the weakest. He dismisses too readily alternative views on John 20:22 and 1 Corinthians 12:13, and offers no serious basis for his dogmatic statement that “Pentecostal attempts to undermine Dunn’s exegesis of Paul are doomed to fail” (127), which is completely out of harmony with his care- fully worded arguments with regard to Luke-Acts.

Indeed, I suspect that few Pentecostals will be comfortable with the distinction he makes when commenting on Acts 19:2, between what he calls the ‘Lukan Paul’ and the ‘epistolary Paul’ whom, he says, would never have phrased the question in that way (108ff). One is inclined to ask, “But which is the historical Paul?”, and to wonder if Pentecostal scholarship is in danger in losing its faith in the historicity of Acts! To defend the doctrine of the baptism in the Holy Spirit at the cost of our commitment to the authority of scripture would be a doubtful blessing indeed.

Finally, Atkinson concludes with some valuable practical implications, challenging his fellow Pentecostals to put their doctrine into practice. This must include ensuring that we have received the power Jesus promised and implementing that power in witnessing to Jesus (Acts 1:8). Our presentation of the gospel should include prayer for new converts to receive the Spirit (Acts 2:38-39). Our previous experience of the Spirit should not prevent us from praying for renewed acts of power (Acts 4:23-31).

In summary, despite the weaknesses to which I referred above, Atkinson has provided a valuable summary of the debate thus far and offers compelling evidence that with regard to Luke-Acts at least, Pentecostal debaters have shown overall that Dunn is wrong. He is to be commended for his encouragement to Pentecostals to believe in their understanding of Acts, but perhaps even more importantly, to put it into practice.

Are any of you familiar with Damon Thompson? If so, what do you think?