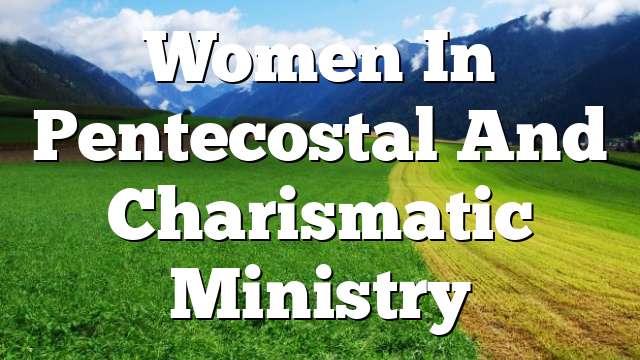 and Charismatic Ministry: Informing a Dialogue on Gender, Church, and Ministry

Margaret Alminana and Lois Olena’s contribution to the Global Pentecostal and Charismatic Studies series entitled,Women in Pentecostal and Charismatic Ministry: Informing a Dialogue on Gender, Church, and Ministry, is a thorough- going volume within the burgeoning corpus of Pentecostal scholarship, high- lighting the contributions of Pentecostal and Charismatic women who have largely been overlooked. Written by mostly female, Pentecostal scholars, this volume is divided into four sections that explore the breadth of women’s engagement with scripture, history, global personalities, and decidedly female concerns in Pentecostal ministry and leadership. The range of topics covered in this edited volume constitutes a stalwart contribution to Pentecostal spiri- tuality from a distinctly feminine perspective, unmuting women’s voices, and expanding theological horizons. A delightful feature of this volume is the edi- tor’s note that is included before each chapter. In it, the editors summarize the chapter and guide the readers through the contours of the topic being dis- cussed. Each author shares a common concern to amplify the tacit voices of women in ministry throughout history, and the theological causes that they champion.

There is much to be appreciated in this book. In the first section, Melissa Archer, Mimi Haddad, and ZachTackett explore the biblical and historical roots of women in ministry. Melissa Archer’s essay begins in testimony and centers on a Pentecostal reading of the New Testament. She uses Acts chapter two as the hermeneutical lenses through which Pentecostal readers have historically read sacred scripture (37). She then explores the identities and work of key women in the New Testament through the aforementioned Pentecostal lenses and she includes a protracted examination, comparatively speaking, of the women and texts within the Pauline corpus. Archer ends her chapter by revis- iting two of the so-called “texts of terror” and reframes their exegesis within a Pentecostal matrix for scripture study.

Chapter two, written by activist and theologian, Haddad, proffers a criti- cal reassessment of accepted models for male/female relationships and func- tional ministry roles. She argues that women have often been relegated to lower stations of service because of faulty ontological assumptions and his- torical amnesia. Therefore, she eloquently reminds the readers of the valorous deeds of understated women throughout scripture including unsung person- alities like Eve, Huldah, Zipporah, and Leah. Tackett’s essay rounds out this section by tracking the trajectory of Pentecostal women as preachers of the

gospel. He frames this chapter within the context of Pentecostal praxis (74) and tracks the development of Pentecostal gender sensibilities from the beginning of the twentieth century to present. Along the way, he critiques the nuanced inequities between men and women that have been promoted within Pente- costal circles. Though his claim is applicable to many Pentecostal denomina- tions, he particularly focuses on and draws his research and examples from the Assemblies of God.

Part two is populated with essays written by English de Alminana, Jennifer A. Miskov, Amy Collier Artman, and Kate Bowler. In it, they herald the personal- ity profiles of women in history that serve as exemplars of egalitarian, pastoral, innovative, and counter cultural ministry and leadership, leading up to and throughout the early Pentecostal movement. This section invites the readers to reconsider their common perceptions of the persons and work of Florence Crawford,CarrieJuddMontgomery,KathrynKuhlman,andsomeof thewomen within the so-called “Prosperity Gospel” orbit of the twentieth and twenty-first centuries. These case studies of women in ministry illustrate the claims of their respective authors as to the validity of and necessity for women to share in equal partnership with their male counterparts in Pentecostal ministry.

Part three extends the conversation into global and avant-garde fields of women’s contributions to the establishment of the church and confronting oppressive ideologies around the world. Readers will discover important themesof resistance,feministideologies,hospitality,andrelationshipbuilding, and the value of girls and women as it relates to sexual identity. Denise Austin, Jacqueline Gray, Linda Ambrose, Olena, and Beth Grant have chronicled exam- ples of Pentecostal women who have significant impact in global contexts. Their stories and corresponding theological constructs challenge the reader to reevaluate norms and presuppositions for Pentecostal ministry, largely in- formed by and lived out in the West. This section of the book (with the excep- tion of chapter nine) draws from mostly marginalized voices in non-western contexts.

The final section of the book identifies the particularities of Pentecostal women’s ministerial engagement and the corresponding challenges that women face in the practice of ministry. Loralie Robinson Crabtree, Joy Qualls, Estrelda Alexander, Stephanie Nance, Ava Oleson, and Peter Althouse all address important, specific concerns for women serving in leadership within the Pentecostal sphere. Their experiences and constructive approaches to churchplanting,liberationfromdualmarginalization,co-genderministrypart- nership, and spiritual self-agency succor this section with robust, theological tensile strength. This section rounds out the book’s important contributions to the larger conversation of women and ministerial leadership.

I commend this seminal work, which sustains a dedicated argument of over four hundred pages for the cause of a more fully orbed ministry practice that includes and celebrates women’s experiences, theological contributions, and leadership. The exactitude and nuance that each contributor brought to his or her topic is excelled only by their obvious conviction that each one has for egal- itarian ministry and faithful reporting of the same. Their skillful articulation of the consequential matters should shape and direct dialogue in the future. For me, it raised the question: how much more developed would the church be if the voices that these scholars amplified through this volume had been included in the conversation earlier, or taken more seriously?

As with most books of wide and far-reaching scope, this text wants for fur- ther exploration of the fifteen essays presented. Some of the methodology may need further explanation to be more fully understood. Though this may have been an editorial goal to foster dialogue, it tended to obfuscate some of the important content in a few of the chapters. I do however, believe that this is a germinal work that will foster more conversations and expand the dialogue within scholarly and ecclesial circles. Each author’s scholarship is as nuanced and critical, as it is insightful and provocative.

GOD’s got my back