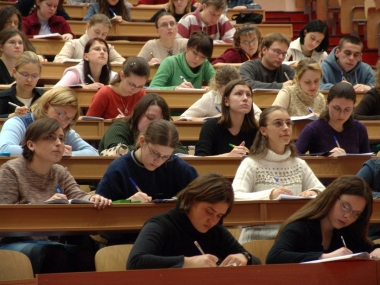 I will be preaching on the Stephen F. Austin State University campus in the open air today along with Bro Jed Smock. Please keep us in prayer that we would be able to boldly proclaim the truth to the lost effectively and without compromise.

Roger David [01/28/2016 7:24 PM]
If anyone prayed, thank you. It was a blessed and effective day. We did a lot of plowing and sowing…I’m hoping that as we return tomorrow we can do some reaping. Praise God!

Roger David [01/29/2016 10:58 AM]
This is the other side of the banner. We made front page news as a “confrontational evangelists”. At least this time they didn’t equate me as the Christian version of ISIS. The world rarely reports the light. They love the darkness.

Roger David [01/29/2016 6:45 PM]
Again if anyone took the time to pray for su I appreciate it today as well. It was another good day and for John Kissinger I am the one at the end of the video holding the banner.

I am friends with Campus Ministry USA and when they come into local colleges I join them.

Roger David [01/29/2016 6:53 PM]
It was the sin loving “Christians” that were mocking the most. The lost sinners are the ones that were willing to hear what we had to say.

Roger David [01/29/2016 7:20 PM]
I preached that sin is bad for you. It messes with your life…your families life….even the whole society is affected by sin. It causes pain and misery to all that practice it. I preached that because of that sin that affects the world, God sent His Son to come teach us and guide us and ultimately to die for us….so that we can be set free from the bondage of sin and live righteously through the power of the Holy Spirit. Meaning that we now can choose to believe on Jesus and what He accomplished on the cross and repent of our sins, because HE has won the victory over it for us and now we no longer have to go to hell or contribute to the sin of the world anymore. We can now through grace live right which will benefit us, our families, and in fact society. So the only thing you will lose if you repent and believe on Jesus Christ is that which hurts you and offends God…what you will get is confidence that you are living right, being a blessing to God and you will have a chance to now know His will, know His love, know His peace, and as an added bonus you don’t have to go to hell. You no longer need to feel separated from the lover of your soul. All because of Jesus.

That is what I made sure I preached to every student I talked to which was hundreds….then after I got past that I let them ask questions ….after I answered all their questions I challenged them to repent and believe on Jesus. We go to pray with some and just admonish others. The ones we prayed with we have invited them to contact us again so we can disciple them (not using that terminology with them though)

No I do not have a number that I can report…nor would I trust that number if I tried to report it. But it was a blessed 2 days.

Jesus, Our Tree of Life

JESUS, OUR TREE OF LIFE – Ray E Horton I read about the fall of man in Genesis 3 this morning. They ate of…