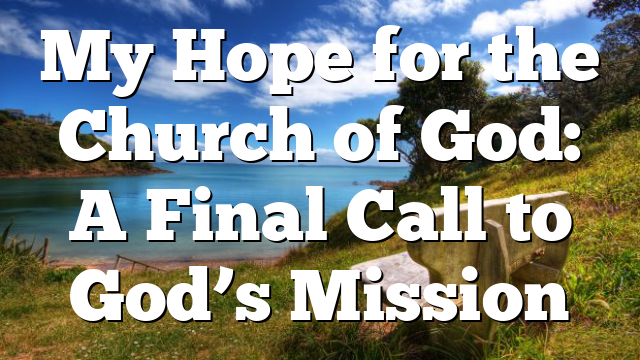 Today, I join thousands of others in making my way to San Antonio for the General Assembly. As I do, I am reminded of my own journey and God’s goodness. God has graciously adopted me into his family and called me to serve in his mission. It’s God’s mission, not mine.

My mother’s father and her uncle pastored Church of God congregations throughout Florida from the 1920s until the 1960s. I remember telling Paul Conn once that a family member had been at Lee University every decade since the 1940s. My great aunt, Nina Driggers taught many students during her time on faculty.

Before I left Lee in 2007 to serve on the faculty at Regent University, I asked Hollis Gause to lay hands on me. Dr. Gause represented continuity with Church of God educators going back to the late 1940s when he first started teaching and my family members first started attending Lee.

Little did I know how that prayer would impact me. I thought it was about launching me into a future somewhere else, but in reality, it was an anchor holding me to the place of my calling. I returned to Cleveland in 2020 after joining the faculty of Pentecostal Theological Seminary. David Han assigned me Hollis Gause’s old office. The prayer had come full circle. Thirteen years later, the anchor held.

When I entered the office, the first thing I noticed was a photo of the 35th General Assembly of the Church of God in 1940. There on the front row were my great-uncle, Carl White, and my grandfather, Marvin D. Alderman. As I surveyed the photo, the Spirit whispered in my ear, “Welcome home.” It was a spiritual moment of continuity and confirmation.

Some have wondered what this upcoming General Assembly might mean for the future of the denomination. While I am not a prophet, here is what I know.

We need to look past our present circumstances. God is moving just beyond our field of vision.

God has guided the Church of God for over a century from a small group in the foothills of the Appalachian mountains to the millions of members who now cover the globe.

Too often we develop tunnel vision. One form of tunnel vision is to become so fixated on present realities that we lose the bigger picture. We see what is happening around us in North America and we think that we are losing ground. This can lead to gloom and doom.

What we don’t see is that God is moving just beyond our field of vision. What we do not see is that God has raised up the Global South. It is the next Christendom. Our brothers and sisters in Africa, Central and South America, and Asia are rising in the power of the Spirit. The growth of Pentecostal-Charismatic Christianity is so strong that forecasters predict it will reach 1 billion by 2050. The two dominant forms of Christianity in 2050 will be Catholicism and Pentecostalism both of which will be connected by the Charismatic communities overlapping them.

Lift up your eyes and see what the Spirit of God is doing. Most immigrants pouring into America are Pentecostal or Catholic. The next wave of Christianity is here in the shades of black and brown. This is God’s rainbow.

Sociologists like Peter Brown have witnessed this phenomenon and wondered whether the secularization of the West is not just an anomaly. It’s not the future. It’s a blip on the radar in the grand scheme of history.

And, that’s the issue. We look at the size of the blip as though it’s a tidal wave about to crash upon us and sweep up everything in its wake. I am sure that some early Christians thought their movement would be wiped out by emperors like Marcus Aurelius who sanctioned their torture and martyrdom in Roman arenas.

No doubt the seven churches of Revelation cowered under the might of Rome. Then Jesus appeared saying, “Do not fear! I am the First and the Last” (Rev. 1:17). John saw a vision that the Lamb slain is also the conquering Christ. Christ is still conquering as the Lamb. He is the Lamb who clothes his wisdom in meekness, gentleness, and service. This seems like foolishness to some.

He is also the one out of whose mouth comes a sharp sword—the sword of the Spirit. This sword is the eternal Word of God piercing hearts through the infallible Word of Scripture. He is the faithful witness who reigns in power over his people. His conquest is unfolding right before our eyes in storefronts, small towns, and villages. It’s happening in homes and huts, corporate offices and neighborhood businesses.

We are not an American church with a missions arm; we are a global church that points the way to God’s future. I pray that God will open the eyes of our people to look beyond the immediate problem and, like Elisha’s servant, peer into the portals of heaven where the army of the Lord is standing and surrounding us. God is operating just beyond our field of vision.

We need to fight out of faith, not fear.

When we succumb to tunnel vision, we begin to function in fear. There are many cracks in our life that fear uses to enter: our sense of inadequacy, our hunger to be somebody, our desire for success, our anxiety over tragedy, our helplessness in the face of cultural forces, and our desire to protect those we love. Through these many paths, fear creeps in upon us like a virus. We start to avoid others lest we become contaminated. We circle the wagons. We become inward and protectionist.

You can tell when someone is operating out of fear. Life becomes about exercising greater degrees of control. I remember the first time I entered the airport with my kids. Suddenly the halls and escalators I had navigated a hundred times became dark and dangerous places that could any moment tear my children from me. I got anxious. In my anxiety for their safety, I went into command and control mode. I found myself fighting the desire to yell at them to stop doing what normal kids do in their own excitement. My wife had to turn and say to me, “Trust our kids. They’re fine. They know how far they can go.”

When we are afraid, we want to control. We also gravitate toward people who take control and tell us what to do. But, this is not about faith.

Faith is the substance of things hoped for, the evidence of things not yet seen (Heb. 11:1). It’s a vision of the world to come, a yearning for and trust in the God of hope to finish what he started. It’s God’s mission, not ours. God invites us to be part of what he is doing.

We win when we live out of this vision of faith and rest in the God of all comfort who will see us through every trial and tribulation. “Those who wait on the Lord shall renew their strength; they shall mount up with wings as eagles; they shall run and not be weary; and they shall walk, and not faint” (Is. 40:31).

As Gregory the Great reminds us, Scripture “has food for children sitting there in plain sight but keeps hidden away the things that fill distinguished minds with awe. Scripture is like a river, broad and deep, shallow enough for the lamb to go wading, but deep enough for the elephant to swim.”

Scripture is as simple as “Jesus loves me this I know,” and as deep as the eternal triune mystery. When we learn to swim in those waters through the help of the saints of the ages, we come to see how deep and wide is God’s wisdom. It’s the answer to all of life.

Yes, the Church of God should always stand for the gospel, the good news that God has come in Christ to liberate the world from sin, death, and the devil. This gospel is the power of God unto salvation. We should never be afraid to declare this gospel clearly and compassionately. But, we should never declare it out of fear. It’s God’s mission and God’s good news, not ours. Our job is to tell others just how good that news is.

God is already moving to renew his church. He is bringing renewal from the south to the north. It is already here and we are already part of it. We should forge our statements out of a deep love for the world rooted in God’s love that nothing can ever separate us from. This is my hope for the Church of God. That we will see God is already at work and that we will let go of our fears and operate out of a faith to finish the mission. After all, it’s God’s mission, not ours.

Kenneth Copeland and Rod Parsley are ready to come into agreement for your miracle. Miracle, Healing and Victory Jubilee Prayer Cloth Service 2015. Ricky…