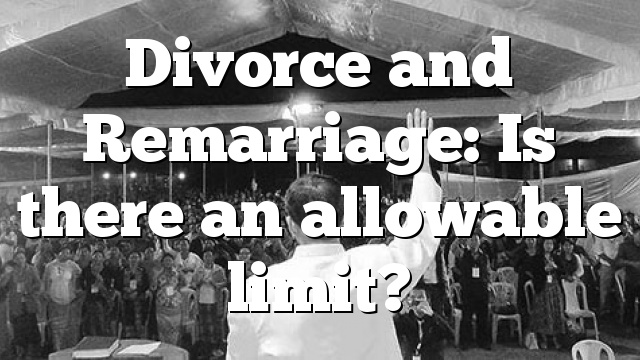 I saw a video of a guy on YouTube who thought that your marriage wasn’t legit unless Jesus told you to marry before you did it, and encouraged people to pray and make sure their marriage is a real marriage.

I talked with a woman in Indonesia once who heard a lot of testimonies about God putting people together in marriage. We were both single. She said I needed to be careful to marry who God had picked out for me, or I might have to get a divorce and marry the right now. (Indonesian Christians generally have strong marriage values, btw.) I disagreed with her about her perspective.

Last night, Peter A Vandever and I disagree over an issue related to marriage. As I understand what he said, he thought that old white guys who marry Filippinas and financially supported their parents were engaging in prostitution. He said one guy punched him in the face for preaching that. I told him maybe he deserved it for calling the man’s wife a prostitute. I also said it was dangerous to call people’s marriages ‘prostitution’, which might lead them to divorce and marry someone else if they believed it.

I’d like to start a topic here on marriage, and some of the ‘overspiritualizing’ people do on the topic.

– Paying a bride price for a wife and marrying her doesn’t make a marriage invalid. They did that in Biblical times. – Arranged marriages aren’t illegitimate. They did similar things in Biblical times (e.g. Isaac and Rebecca.) -Age gaps don’t make marriages illegitimate (Isaac and Rebecca. Boaz and Ruth.) – Western culture says to marry who you fall in love with (and if you fall out of love, get divorced and find someone else.) The Bible says ‘Husbands love your wife.” Marriages that don’t fit the western paradigm of ‘falling in love and getting married’ aren’t illegitimate because of it.

We have to be careful not to treat our culture like scripture.

I also see a strong Biblical pattern of fathers giving their daughters away in marriage. Even the Shechemites, Canaanite as they were, realized they needed Israel to give Dinah away in marriage.

Link Hudson [09/25/2015 10:03 PM]
Peter A Vandever, it’s a good topic for conversation as this sort of stuff comes up with Pentecostal and Charismatic types from time to time. Why does it have to die? Btw, you could just say, “Hey, I was wrong about that.”

Peter A Vandever [09/25/2015 10:08 PM]
]you are making a big deal out of minor issues and still reject the cultural element of the new testament

Link Hudson [09/25/2015 10:11 PM]
Peter A Vandever Hmm. You seem to be rejecting parts of the New Testament and Old Testament as ‘cultural elements.’ At the least, the cultural elements that God regulates would have to be neutral, not evil. Why would bride prices, for example, be evil if God give commandments to Israel about paying them. It demonstrates thet the bride is valuable. Christ even bought us, his bride.

I dont’ think i get your ‘reject the cultural element’ like of reasoning.

Link Hudson [09/25/2015 10:19 PM]
Peter A Vandever if a marriage ends in divorce over it, because one of them believes their marriage is ‘prostitution’, then it is definitely not a minor issue for them.

Francisco Arriola [09/25/2015 10:55 PM]
Link you are coming across as someone who is knit picking the bible to attack common christian practices (knit picking is not in the bible, nor is practices) to prove how deeply immersed you are in the scriptures

Francisco Arriola [09/25/2015 11:03 PM]
Link share with us your powerful Acts 4:32 event when you divested yourself along with your brethren of your 401K and other monetary assets and willingly shared them among those who did not or could not save enough for their retirement etc.

Francisco Arriola [09/25/2015 11:10 PM]
pastoral ministry has changed over time, get over it and accept it-make it better, but don’t act like you are above it all by citing all the nt texts of how they did ministry before the telegraph, the newspaper, the telephone, television, and the internet

Link Hudson [09/25/2015 11:18 PM]
Francisco Arriola, understanding Biblical ministry roles and functiong Biblically as a church in these areas may not resonate much with you, but it does resonate with some other people.

Link Hudson [09/25/2015 11:20 PM]
You haven’t even asked any questions. If you want to talk about another topic, how about starting another thread for that.

Link Hudson [09/25/2015 11:22 PM]
Francisco Arriola, telegraph is irrelevant. Some cultures still have bride prices or other kinds of dowries. These are contemporary issues.

Link Hudson [09/25/2015 11:25 PM]
Francisco Arriola, i can relate. i’ve got 4 kids, too. Do my comments on marriage hit a sore spot with you? I’ve spent a lot of years overseas, and I’ve lived in countries that have had some arranged marriage, though it didn’t seem to be the dominant way.