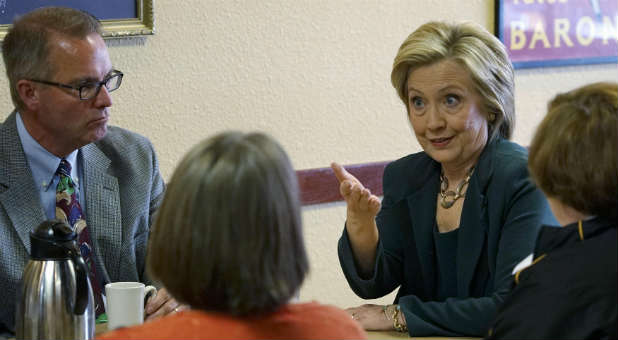 You see just saying, “I am a brain surgeon,” doesn’t mean I can perform brain surgery. I would need to back it up with a diploma and years of training. In the same way, no American will get elected president claiming, “The Bible is outdated, it’s just a bunch of stories. I am a humanistic socialist at heart!” Sure the left will have no problem with that, but you can’t win without independents. So the candidates claim to be Christian—despite having very unchristian positions.

However in a day where anti-biblical behavior is celebrated, where Bruce Jenner is called a hero (not for winning the decathlon, but for identifying as a woman), it is only a matter of time before politicians began to boldly speak against the Bible.

Hillary Clinton is testing the waters. It is one thing to take anti-biblical positions, but to publicly call Americans to forsake the Bible is too much. Giving an address at the Women in the World Summit last week, she made this statement:

Far too many women are denied access to reproductive health care and safe childbirth, and laws don’t count for much if they’re not enforced. Rights have to exist in practice—not just on paper. Laws have to be backed up with resources and political will. And deep-seated cultural codes, religious beliefs and structural biases have to be changed.

James Price [05/05/2015 4:07 PM]
I have studied Mrs. Clinton since she was a young woman active in the UMC youth groups, how that she organized a prayer group in college that has stayed together all these years and still support each other in prayer. As a young first lady of Arkansas she traveled the state to help the many young women, who was in effect living in a depressed state. It is true that she may not take the Samson story literally; that is that he caught exactly 300 foxes, that he tied their tails together and even put a torch between them, that somehow they stood still long enough for him to do all this and that they rushed out to burn the crops which we now know to be contrary to our Lord who wants to give life and that more abundantly. Instead she puts this in the category of the Jewish hero stories. Is it not possible that she, like Joseph has been brought along to help deliver millions from poverty and ignorance. Can you think of anyone who has had a more productive life?

From the Betrothed to the Bride

FROM THE BETROTHED TO THE BRIDE – Ray E Horton [Going through old Journals, I came upon this from December 27, 2006. I am…