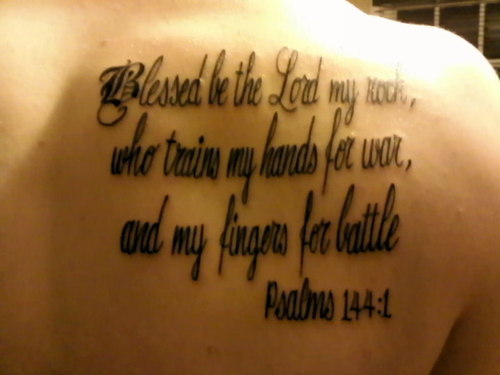 Pentecostal Theology [08/17/2015 8:05 PM]
The Bible mentions tattoos just once, at Leviticus 19:28, which says: “You must not put tattoo marking upon yourselves.” God gave this command to the nation of Israel, thus setting them apart from the neighboring peoples who marked their skin with the names or symbols of their gods. (Deuteronomy 14:2) While the Law given to Israel is not binding on Christians, the principle underpinning this law is worth serious consideration.

Timothy Carter [08/17/2015 8:57 PM]
Pentecostal Theology Did you catch that God has a tattoo? And it has our name tattooed in His hand(Is 49: 16) so that is not the only place where the Bible is talking about tattoos.

Leah M Grier-Lee [08/17/2015 9:31 PM]
I would rather see tattoos with a biblical msg rather than the scars I have from childbirth & various medical procedures ~ No Difference

John Kissinger [08/17/2015 10:39 PM]
I’d like to see a Christian tattoo with the generations from the book of Numbers. I will recognize even anyone with Mt. 1:1-17 tattooed on their back. If you have the last one, pls call as I’d like to use you as my sermon illustration Sunday morning… (preferably Christmas if available)

Once in old testament when talking about not worshipping false gods and the other time is in the NT.

The NT talks about Christ returning with a tattoo on his leg.

Timothy Carter [08/18/2015 1:55 AM]
Tattoo is not a Sin it might not be the best idea ever but it is not a sin. Anyone who wants to preach tattoo is a sin has a misunderstanding of something. YES a tattoo can be a dirty work of art just like a photo can but that doesn’t mean ALL people who have photos are committing a sin. The tattoo can also be responsible like the one above or children’s names extra.

Timothy Carter [08/18/2015 2:47 AM]
Not trying to give a mixed metaphor. I was trying to be polite. Dirty R rated OR X rated nude sexual OR Language tattoo not suitable for children under age. How can getting a tattoo of a church ? not be a sin but getting a tattoo of my dead son’s name separate me form Christ?

FacebookTwitterSubscribe
Subscribe to receive all news to your email or phone: [wysija_form id="1"]
biblicalchristiantattoos

The Foundation for Pentecostal Scholarship is seeking titles