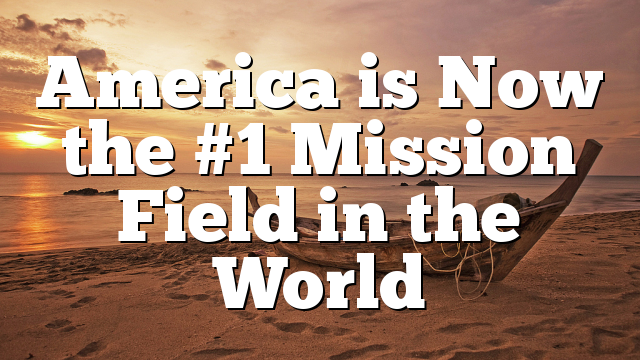 “God said, “Go and tell this people: ‘Be ever hearing, but never understanding; be ever seeing, but never perceiving.’” Isaiah 6:9, NIV

In studying Isaiah 6, you will notice that God called Isaiah to his own people. In verse nine, God told Isaiah, “Go and tellthis people.” He was to announce God’s warning to those who lived all around him. Obviously, there are those like Jonah in the Old Testament and Paul in the New Testament whom God called to live and preach in foreign lands. However, most of the prophets and apostles God called were sent to their own people. What can we learn from this? Christ’s Great Commission to us includes the call to go both to our own community and to the people groups beyond our own.

In obedience, many evangelical churches take mission trips to other states and other countries. This is good. God calls us to go to other people groups. But too often the participants return from such a trip only to go right back inside their churches and forget those all around them. If a mission trip away from home ignites us to become missionaries to our home community, then it is very profitable. But if missions to those far away is simply a checkmark on our church list before we go back to business as usual maintaining our club car, then we have fallen far short.

Those of us who love the church should be shocked. These facts tell us that North America is no longer the main missionary-sending continent in the world. Instead, North America has become the main mission field in today’s world. Nations once considered by American Christians to be primary mission fields are now sending missionaries to us. All around us are those who have no knowledge of relationship with God through Jesus. Like Isaiah, we are surrounded by those who have hardened their hearts to God and his love. And that hardness is not limited to those outside the church. As in Isaiah’s day, the people of God have hardened their hearts to all God has called us to be and to do.

Which of these is more difficult: To get people outside the church interested in Jesus, or to get people inside the church interested in those outside to share Jesus with them? Indeed, most of us in the church are not sure if we even know people who are not Christian. And beyond that, we are not so sure we want to know them. We are much more comfortable staying in the church club car, making occasional forays outside to issue impersonal invitations to those along the tracks before we scurry back into the safety of the Church Train.

Were you aware of the stats quoted above?  What do these numbers mean to you?

These two true stories are a revelation on spiritual warfare! A must view! #perrystone #prophecy #mannafest Perry Stone or anyone from our ministry will…