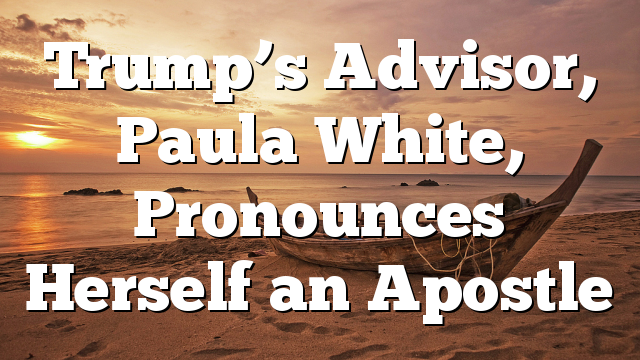 Paula White Cain, the thrice-married minister and former mistress of Benny Hinn, has pronounced herself to be an Apostle of Christ and installed her son as the new pastor of her church. While her son is the new lead pastor, White will serve as an “oversight pastor.”

Women, according to the Bible, shouldn’t be pastors at all. But while female pastors are not altogether rare in Pentecostal churches, having “Apostles” is a rather new phenomenon, associated with the New Apostolic Reformation (NAR). Some charismatic apologists, like Michael Brown, deny that NAR exists, in spite of high-profile figures like White declaring themselves Apostles.

NAR, although it also goes by other names, is a recent teaching in charismatic circles that the office of the Apostolate has been revived in latter times and Apostles walk the earth now just like in the days of the 1st Century church. It is closely associated with the prosperity gospel and Dominionism, the belief that God requires Christians to take over the “seven mountains of culture” to hasten Jesus’ return to Earth.

White told her congregation on Sunday:

“So today, I am officially installing Pastor Brad and Pastor Rachel as the senior pastors of over City of Destiny. Everybody stand up on your feet, because this is God’s plan. I am moving to what I call oversight pastor, but let me explain that. That is apostolic, but I just haven’t embraced the title, though. … But as apostolic overseer of City of Destiny, today officially, it’s all been done legally, officially, we are City of Destiny. Welcome to your new beginning.”

White renamed her church, probably to keep a legal right to past residual revenue of the church body, as many charismatic churches operate as businesses owned by the pastors. The church’s name, while under the ownership of White, was New Destiny Christian Center.

Like the Apostles of the 1st Century, NAR Apostles also claim to hear directly from God and their edicts can’t be challenged.

White was at the Unleashed Conference over the weekend and told the crowd after Jentzen Franklin got done speaking, “I’m just messed up, it’s so powerful and profound. I told my son (Brad Knight) will be the pastor as of this Sunday (May 5), because God spoke to me, so y’all don’t wanna miss Sunday because City of Destiny is being launched, come on. And God is moving. I’m the oversight pastor.”

Biblically, a pastor is also known as an ἐπίσκοπος (commonly translated “overseer”). Therefore, White is making herself an “oversight overseer,” which seems redundant. White reportedly plans to help, in her role as an Apostle, to plant three thousand churches.

The mission is NOT impossible through a HOLY GHOST PROTOCOL

The mission is NOT impossible through a HOLY GHOST PROTOCOL God has created a need in someone’s life, which only you can answer House…