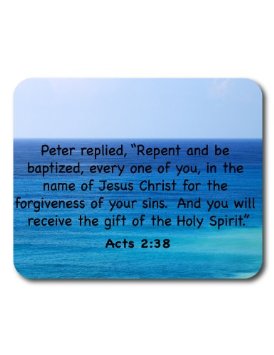 Peter replied, “Repent and be baptized, every one of you, in the name of Jesus Christ for the forgiveness of your sins. And you will receive the gift of the Holy Spirit.

I am curious to see why is it that some people complicate this?

Here it says the Water is for the forgiveness, not as a means to show of my faith before men as some denominations claim. (A clear declaration before heaven and earth that you are cleansed)

Repentance and asking for forgiveness is also for the forgiveness of sins. As John the Baptist declared. (Repent for the Kingdom of heaven is near)

So in these texts, I am confident that after receiving forgiveness through either manner listed above, and also by the laying on of hands a man can receive the Holy Spirit.

So how many of you disagree? I see allot of that in theology, that is dissention, but the text is clear.
I want a reply of someone who can add to this, not take away. What does the Holy Spirit say to you?

Timothy D McCune [09/27/2015 9:21 PM]
When I read Acts 2:38 I see repent= to ask forgiveness of sins to turn away from sin. Be baptized= to follow Jesus in His example for us all to declare we have turned from our sins. That we are going to follow Him, that we are His child and are saved. Receive the gift of the Holy Ghost= Is His Spirit in filling of us , I have seen people come up speaking in Tongues and people come up not.
I personally believe that at the alter or wherever you are that at the time you feel Gods undeniable touch on your heart and soul that pull to repentance. At that moment that you with a broken and contrite soul ask Jesus for forgiveness and ask Him to be your savior He does just that and you are saved. Baptism in obedience to Him bring us into fellowship with Him it shows we are following Him in Death to sin = repentance. Burial to our old life = Baptism. Resurrection = to live as Christians.

Timothy D McCune [09/27/2015 9:45 PM]
Charles Page, yes but I believe we as Christians should be baptized. Because Jesus himself was baptized by John. We in my opinion should follow Him in our walk. For those who believe a person has to be baptized for salvation as I was raised I don’t fault them for there belief since they are following what’s in there heart. I hope that explains it. In truth I still struggle with it.

I believe it as an demonstration, not only before man as taught in Church of God, but also in the heavenlies. A sold out declaration of purification before heaven and earth. Then as the Lord enables, a man is filled with the Holy Spirit through his ultimate submission.

I wasn’t baptized first, but prayed up when I received the Holy Ghost by the laying on of hands. It was amazing, and to this day I still see his works and feel his presence in my life. Though, I don’t believe we can base anything upon feelings, but more upon the faith we confide in. For it is written that without faith we cannot please God.

Levi Allen Goff [09/27/2015 11:28 PM]
Amen, so it is by his faithfulness unto us! It seems to me this is the way we will meet, by our faith in him and his faithfulness to us. Just as faithfulness between a husband and wife in marriage. Like the prodigal who was walking down the road and then met by his father as he seen him returning! But as I consider the testimony of Jesus, on the cross it seemed even he was losing faith thinking that he could have been forsaken. Suddenly, it was then he was received upon his admission into the hands of the father!

Peyton Gurley [09/28/2015 11:22 AM]
Titus says baptism saves us. Galatians says if you are baptized into Christ you have put on Christ. Romans says you’re baptized into His death. Mark says that if you believe AND ARE BAPTIZED you shall be saved. Acts 2:38 says you’re baptized for the remission of sins. It seems more than an outward show of devotion. Also, it has to be done in Jesus Name. Not titles.

Peyton Gurley [09/28/2015 11:52 AM]
No. It is. The mockers asked Peter what they needed to do. And Peter told them. Also Jesus said to Nicodemus that you have to be born of water and Spirit to enter the kingdom of God. The Bible says without His spirit we are none of His. Scripture interprets Scripture. Put it all together and you get the plan of salvation.

Peyton Gurley [09/28/2015 12:19 PM]
I don’t require that. The Bible requires you to believe in One God. That Jesus is God. Some trinitarians believe that. Some don’t understand what they believe.

Charles Page [09/28/2015 12:24 PM]
We all have to believe in one God otherwise we will believe in three Gods. I am trinitarian and believe that the incarnated Jesus is God. He was God and was with God. He was begotten in
time and had a beginning. The Word, Father and Spirit were without beginning.

Charles Page [09/28/2015 12:54 PM]
I’ve been chosen for salvation washed by regeneration in blood and water, some years later was baptized for remission of sin and then later was baptized with the baptism of Jesus with the Holy Spirit evidenced plainly by speaking in tongues.

All the above covers almost 20 years.

Timothy D McCune [09/28/2015 4:16 PM]
I have a question, what about the thief on the cross next to Jesus. Jesus said to him surely this day you will be with me in paradise. Where was the thief baptized?