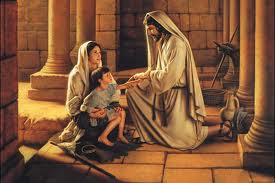 “Jesus…said, “Go home to your own people and tell them HOW MUCH THE LORD HAS DONE FOR YOU, and how he has had mercy on you.”” (Mark 5:19) [What wretched condition this poor man was in; he was under the power of an unclean spirit, the devil got possession of him, and the effect of it was not a silent depressed state, but a raging frenzy; he was raving mad; his condition seems to have been much worse than any of the previous possessed that Christ delivered, and DELIVER HE DID! This man was now clothed and in his right mind!] “When Jesus had again crossed over by boat to the other side of the lake, a large crowd gathered around him while he was by the lake. Then one of the synagogue leaders, named Jairus, came, and when he saw Jesus, he fell at his feet.” (Mark 5:21-22) [Jesus just went from one miracle to another!] “He pleaded earnestly with him, “My little daughter is dying. Please come and PUT YOUR HANDS ON HER so that she will be healed and live.” (Mark 5:23) [Remember this man was a synagogue leader, but his daughter was at death’s door!] “So Jesus went with him. A large crowd followed and pressed around him. And A WOMAN WAS THERE who had been subject to bleeding for twelve years. She had suffered a great deal under the care of many doctors and had spent all she had, yet instead of getting better she grew worse.” (Mark 5:24-26) [A demon possessed man, a dying daughter and a very sick woman! All in a day’s work for Jesus!] “When she heard about Jesus, she came up behind him in the crowd and touched his cloak, because she thought, “If I just touch his clothes, I WILL BE HEALED.” IMMEDIATELY her bleeding stopped and she felt in her body that she was freed from her suffering.” (Mark 5:27-29) [Is anything too hard for the Lord?] “While Jesus was still speaking, some people came from the house of Jairus, the synagogue leader. “Your daughter is dead,” they said. “Why bother the teacher anymore?” Overhearing what they said, Jesus told him, “DON’T BE AFRAID; JUST BELIEVE.” (Mark 5:35-36) [So of course Jesus went and raised the girl from the dead!] “Very truly I tell you, WHOEVER believes in me WILL DO THE WORKS I HAVE BEEN DOING, and THEY WILL DO EVEN GREATER THINGS than these, because I am going to the Father. And I will do whatever you ask in my name, so that the Father may be glorified in the Son. You may ask me for anything in my name, and I WILL DO IT.” (John 14:12-14) [We must believe and allow the Lord to use us so we may do “even greater things”!!!]

Be blessed as you praise The Lord, knowing that WE MAY ASK JESUS FOR ANYTHING IN HIS NAME, AND HE WILL DO IT!
-Bill Stockham

JERUSALEMFor the first time in centuries, scientists have exposed the original surface of what is traditionally considered the tomb of Jesus Christ. Located in…