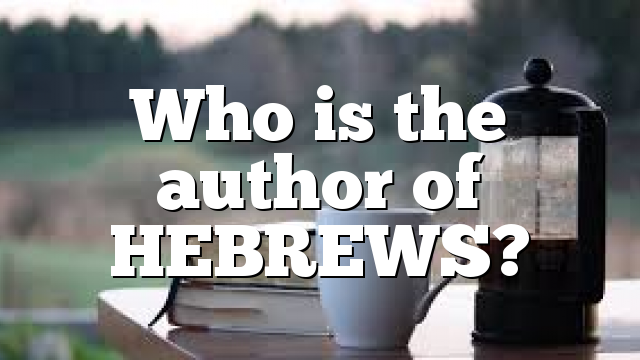 
FacebookTwitterSubscribe
Paul the Apostle
The Epistle to the Hebrews of the Christian Bible is one of the New Testament books whose canonicity was disputed. Traditionally, Paul the Apostle was thought to be the author. However, since the third century this has been questioned, and the consensus among most modern scholars is that the author is unknown.

It is possible Paul wrote the book of Hebrews. There are a couple reasons why this might be the case.

First, in the earliest manuscript editions of the New Testament books, Hebrews is included after Romans among the books written by the apostle Paul. This was taken as evidence that Paul had written it, and some Eastern churches accepted Hebrews as canonical earlier than in the West.

Second, both Clement of Alexandria (c. AD 150 – 215) and Origen (AD 185 – 253) claimed a Pauline association for the book but recognized that Paul himself probably did not put pen to paper for this book, even though they did not know the author’s name.

Clement of Alexandria suggests that Paul wrote the book originally in Hebrew and that Luke translated it into Greek, though the Greek of Hebrews bears no resemblance to translation Greek (e.g., that of the Septuagint).

The nuanced position on the authorship question by the Alexandrian fathers was obscured by later church tradition that mistook Pauline association for Pauline authorship.

The enormously influential King James Bible took its cue from this tradition. In fact, in the KJV, you’ll find the title translated as it was found in some manuscripts: “The Epistle of Paul the Apostle to the Hebrews.” The tradition of Pauline authorship continued.

Parallels between Hebrews and Paul’s writings

It’s certainly reasonable to conclude Paul wrote the book of Hebrews. Many of the thoughts of Hebrews are similar to those found in Paul’s writings:

The soteriology of Hebrews is quite consistent with Paul’s own teaching. For instance, the statement in Hebrews 10:14 that those who have been “made perfect” are in the process of being “made holy” sounds very much like Paul’s teaching on justification (e.g., Rom. 3:21 – 5:9) and sanctification (e.g., Rom. 8:1 – 17). Moreover, both Paul and the author of Hebrews thought of Abraham as the spiritual father of Christians in similar ways.

Both John Calvin and Martin Luther shared this judgment as far as the sixteenth century.

The Roman Catholic Church does not believe Paul wrote Hebrews, possibly retaining a latent memory of the actual author. However, the internal evidence presented by the book of Hebrews itself indicates Paul as author. The style of Hebrews like in the closing verses (13:18 – 25), is quite like many other writing of Paul’s that has survived.

What do you think of the lost books