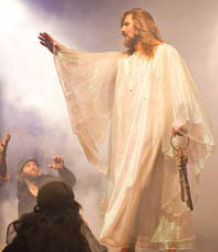 When was hell created? Go…

Ricky Grimsley [12/28/2015 5:47 PM]
Pre adam but after the original creation. Thats why the earth was covered with water

Charles Page [12/28/2015 5:54 PM]
Open Theist would love this theory: hell was hastily created by God and He failed to make it big enough to hold all that will go there.

Brian Crisp [12/28/2015 5:55 PM]
I do believe there is a gap. It cannot be proven or disproven by scripture or anything its just when you add it all up it makes sense but I dont get bent out of shape with someone who doesnt believe that.

John Kissinger [12/28/2015 6:04 PM]
RT Charles Page Scofield and Dake gap is RIGHT – No other Biblical explanation is available to us except extra-Biblical sources

Melody Cates Kinzer [12/28/2015 6:14 PM]
I do not know the answer but I have heard it taught that God created hell on the second day of creation. It is the only day in The Bible that does not say “And He saw that it was good.”

David Cerrone [12/28/2015 6:27 PM]
Not a direct answer but if one knew when Lucifer decided to rebel. That when it would have been created because that is who it was intended for.

Ricky Grimsley [12/28/2015 6:30 PM]
I talk about this stuff now because i started reading the bible really young and i had no real mentor. I asked these questions but got tired of hearing lame things like ” well something we wont understand till heaven, and you wont ever understand God and the like. Blind faith is just superstition.

John Kissinger [12/28/2015 6:35 PM]
Heaven was created in the beginning. In the beginning God created the heavens… The real question in this discussion is when was hell created. We know it was prepared for the devil and his angels (Mt. 25:41)

Corey Forsyth [12/28/2015 7:05 PM]
Something always seemed off about the young earth theory… It sounds good in theory but never measured up to me

Ricky Grimsley [12/28/2015 7:11 PM]
Evolution reject young earth because evolution takes millions of years and they dont usually believe in god. There is nothing wrong with scientific reasoning. You believe in God because of evidence. Right?

The Bible says The Great Tribulation is 3.5 Years

The Bible says The Great Tribulation is 3.5 Years. 8 TIMES Daniel 7:25 He will speak against the Most High and oppress his holy…