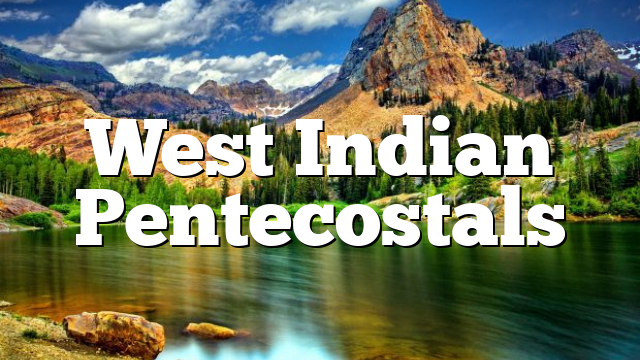 West Indian Pentecostals: Living Their Faith in the Cities of New York and London

Janice McLean-Farrell’s study explores the lived experience of immigrant pop- ulations and how they adjust to the “strangeness” of their new contexts. The author understakes an ethnographic study of three churches in London and Brooklyn to examine the fraught and complex processes of identity construc- tion within West Indian enclaves. Religion, and more specifically, Pentecostal- ism, is the primary framework through which the author examines West Indian immigrants’ conceptions of “home,” their religious and cultural identities, and their interactions with their host communities.

The author likens West Indian Pentecostals’ process of self (re)creation to that of creating a tapestry. The process is “extensive, diverse, and complex, characterized by sections of synergy and dissonance, and the incorporation of old predetermined patterns as well as new ones” (12). McLean-Farrell provides readers with a working understanding of the ways in which British colonial- ism in the Caribbean, racism, and u.s. imperialism form the backdrop of this tapestry. These histories determine how immigrants negotiate their relation- ship to “home” and their new contexts.

The author is primarily concerned with the process of identity formation among adults and youth within these communities. The neighborhoods in which they reside have significant impact on schooling and job opportuni- ties. This is a widely accepted thesis in the literature on the difficult transi- tions immigrants encounter as they assimilate to their new homes. However, McLean-Farrell’s research offers a unique perspective. Her study foregrounds Pentecostalism (which in general, is a neglected denomination within studies on Black/African Protestantism in the u.s. and Britain) and the experiences of Anglophone Afro-Caribbeans (an ethnic group often overlooked in studies of Pentecostalism, which tend to focus primarily on communities throughout Latin America and its diaspora). The author argues that West Indian immi- grants in Pentecostal faith communities experience a dynamic process of iden- tity formation. She argues that any attempt to understand immigrant expe- riences as simply a choice between assimilation and cultural isolation is too narrow. She encourages researchers to attend to the “multiple ways in which these interactions foster the transformation of the immigrant, the host soci- ety, and the home country” (12). The result, especially in the case of immigrant youth, is a hybrid identity—one that draws on their local culture, that of their parent’s country of origin, and the Caribbean diaspora.

McLean-Farrell argues for the church’s integral role in providing youth with the ethical tools to navigate social challenges. Race and class play an important role in how youth relate to whites (in London), and African-Americans (in Brooklyn). The importance of this section can’t be understated. After all, the future of Christian ministry hinges on the experiences and faith practices by the younger generation. This engagement is of great importance, McLean- Farrell states, as immigrant churches become more established within their new contexts. She concludes that youth immigrant experiences “will call for a fresh approach to the incarnation of their theology and praxis” (153).

The relationship between praxis and mission is also a major theme in McLean-Farrell’s study. In contrast to early Pentecostal missions such as Asuza Street and the Church of God, non-western Pentecostal churches, the author argues, are the vanguard of Christian mission. Non-western immigrants living in developed countries engage in reverse-mission work to spread the gospel and re-evangelize Western countries. As a result, the dichotomy between “Us” and “Them”—culturally and theologically—frames how West Indian immigrants engage the world outside of their religio-cultural enclaves.

The author’s study shows that in New York City and London, West Indian Pentecostal churches experience internal and external factors that challenge the way they conceptualize and practice mission. Within the church, immi- grant youth function as agents of change—they encourage the older gener- ation to view mission as one that engages their contemporary context while preserving West Indian cultural traditions. Externally, West Indian immigrant churches are increasingly cooperating with and forming alliances with simi- lar churches to spread the gospel. McLean-Farrell concludes that these shifts raise important questions on how mission work is conceptualized within West Indian churches as they respond to internal change inspired by youth and col- laborating with other Pentecostal faith communities.

McLean-Farrell’s research is an indispensable resource for scholars inter- ested in the study of lived religion and global Pentecostalism. The author’s attention to the effects of colonialism, the impact ofu.s.and European imperi- alism, and discrimination within host societies, pushes scholars to rethink how Pentecostal communities respond to important socio-political issues within their host communities. The author offers examples of youth engaged in com- munity outreach to demonstrate that Pentecostal immigrant youths’ hybrid identities provide them with “the tools to engage with society—especially the poor and marginalized” (133).

The plurality within Pentecostalism and the diversity within immigrant pop- ulations in metropolitan cities demands a complex account of the many forces that inform and constrain faith practices. McLean-Farrell meets this challenge

by centering the stories and voices of West Indian immigrants. Readers walk away with a working understanding of the complex histories that precede migration without losing sight of her research participants’ lived experiences and insights.

Lastly, McLean-Farrell raises important questions on the ethics of ethnogra- phy in the study of religion. The author speaks boldly on researchers’ shifting roles as observers and believers. How do researchers, who share the faith tra- ditions of those we study, orient ourselves compassionately and critically to vexing questions about religious experience? To what extent do our roles as researcher and believer influence how we theorize religious experience—as something deeply personal yet shared? These questions and the ones raised throughout McLean-Farrell’s study carry important implications for how we understand immigrant faith communities within an increasingly globalized world.

Deliverance From Placenta Bondage PRAYER POINTS: 1. Every placenta witchcraft targeted against my destiny, what are you waiting for, die, in Jesus name. 2….