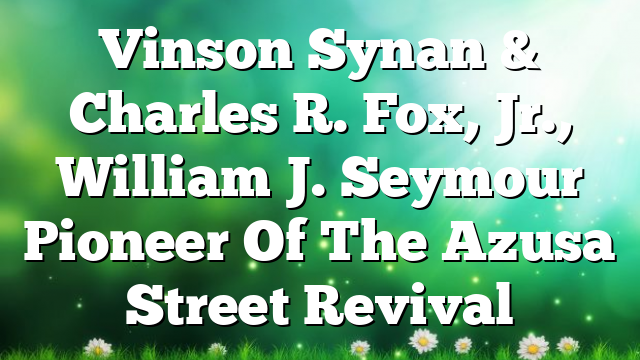 This book describes and analyzes the theology and practice of William J. Seymour and the Azusa Street Apostolic Faith Mission. It is divided into two sections. Charles R. Fox wrote Section One, which looks at the development and significance of the theology of Seymour. Vinson Synan compiled Section Two, which provides primary sources related to Section One and useful for the further study of Seymour’s theology.

The six chapters of Section One begin with an overview of Seymour’s geographical, spiri- tual, and theological journey to Los Angeles with attention to the racial challenges of African- Americans at the turn of the twentieth century. Chapter two surveys the significant persons who influenced Seymour including Martin Wells Knapp, the Evening Light Saints, and Charles Fox Parham. From the Evening Light Saints, Fox argues that Seymour drew tab- ernacle typology that shaped his understanding of justification, sanctification, and Spirit baptism. A discussion of Seymour’s visit to Jackson, Mississippi in late 1904 or early 1905 explores possible influences of Charles Harrison Mason or Charles Price Jones but does not conclusively determine if Seymour had significant contact with either of them.

The third chapter turns the focus to Seymour’s theology. Fox briefly discusses justification and sanctification but extensively analyzes Seymour’s pneumatology and ecclesiology. Fox traces a change in Seymour’s pneumatology from an early acceptance of Parham’s view that tongues are the evidence of Spirit baptism to a later emphasis on love as the “real evidence.” Fox sees this development as the result of the racism and heterodox theology that Seymour witnessed in Parham and others. For Seymour, people baptized in the Spirit will speak in tongues, but tongues alone are not conclusive evidence since some who speak in tongues fail to demonstrate love and teach heterodox doctrine. Fox sees Seymour’s pneumatology lead- ing to ecclesiology in that Spirit baptism brings about unity, empowers for mission, provides divine love, and enables a sanctified life. Fox concludes that for Seymour “the work of the Holy Spirit was to bring together all races and nations into one universal family through divine love” (105).

Such an ideal proved challenging and in the fourth chapter Fox describes Seymour’s dia- log and conflict with Florence Crawford, Parham, and William H. Durham. Chapter five reveals how racism, theological division, and the preoccupation with tongues as initial evi- dence inhibited the lasting influence of Seymour’s message. The final chapter explores implications of Seymour and his theology so that we might hear his voice speak today. Here Fox returns to an emphasis on the work of the Spirit making “all races and nations into one global family through divine love” (165).

In the second section of this book Synan presents Seymour’s writings in two parts: Part One includes the signed articles Seymour published in The Apostolic Faith. These articles are organized chronologically and Synan introduces each one with brief helpful commentary and context. Although it is unsigned, Synan includes the Apostolic Faith Movement’s doctri- nal statement, which first appears in the September 1906 inaugural issue. Synan concludes that Seymour “obviously” wrote the statement and points to the importance of the “five- fold gospel” in the early Pentecostal Movement. Part Two is a reprint of Seymour’s book,

The Doctrines and Discipline of the Azusa Street Apostolic Faith Mission. This republication is unique in that it is reset exactly as the original 1915 publication.

Overall this book is very accessible and is a helpful look at Seymour’s theology along with aspects of his experience that shaped his theology. The reader will not find a lot of new information, but Fox’s analysis draws from important secondary and primary sources and is well documented. Although Synan focuses on Seymour’s signed articles in The Apostolic Faith, Fox liberally draws from the unsigned articles as well. In referencing these articles he sometimes notes they are unsigned, but more often than not treats them as reflective of Seymour’s theology. His footnotes then cite Seymour as the editor of The Apostolic Faith. One might not consider this significant except that in the chapter about Seymour’s conflicts, Fox highlights Crawford and Clara Lum as co-editors and further suggests that without Lum Sey- mour might not have had the ability to produce the paper. This raises important questions: Does the possibility that Seymour may not have written all of the articles create any doubt about Fox’s arguments? Does the implicit attribution of the unsigned articles to Seymour along with citing only Seymour as the editor in the footnotes devalue the vital role of Craw- ford and especially Lum in developing the culture and theology of the Apostolic Faith Mis- sion and the early Pentecostal Movement? Might gender have been a more important aspect of Azusa’s culture and theology than Fox acknowledges?

I chose to use this book for an upper level course on the history and theology of the Pen- tecostal movement at Lee University. I was especially attracted to its overview of Seymour’s theology and the availability of important primary documents of the Azusa Street mission and revival. I expect that I will use this book again. Following the discussion of the book, students made several insightful comments. They suggested a solid historical overview of Seymour and the revival at the Apostolic Faith Mission is necessary to fully appreciate the book. They noted that there is a great deal of repetition throughout the book, and I add here that it reads much like a dissertation rather than a tightly woven monograph. Finally they praised the fact that the book revealed many of the power struggles and human conflict that surrounded the revival that has become an icon in American religious history.

William J. Seymour: Pioneer of the Azusa Street Revival is a book that I will refer to often in my teaching and research.

End Times pastor and televangelist Perry Stone of Voice of Evangelism, Tennessee, recently claimed that world leaders, particularly in Europe, have not only abandoned…