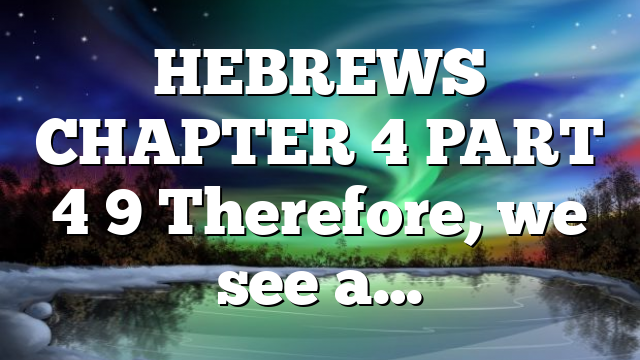 9 Therefore, we see a sabbath rest still awaits God’s people. 10 And anyone who enters into God’s rest, rests from his own works as God did His, 11 so let us work as hard as we can to enter that rest, determined that not a single one of should follow the example of those Israelites and fail to enter the rest because of disobedience.

That God’s rest is still open to His people is now beyond question.

Our writer speaks of it again, but this time he states the truth in a remarkable way.

His use of the term “sabbath rest” is fascinating.

Throughout this letter he has been using “katapausis” which is the regular Greek word for rest.

But here he changes it to “sabbatismos” which means a sabbath rest.

Our writer is probably coining a new word, for this is the only place in the New Testament where this word is used.

This then is his own word for the rest which God began in Genesis 2:2, that rest which He began after He finished the physical creation and set up the human program.

By using this word, our writer lets his Jewish readers know that God’s rest is a completely different and totally separate rest than any kind of human rest.

In no way is it connected with the rest which God gave Israel under Joshua.

It is a rest entered by obedience.

Now this sabbath rest is FUTURE.

It is a rest entered after our work on earth is done, after our trials and labors are over.

When God completed His work of creation He rested.

When we’ve completed our work for Christ, we’ll rest too.

But the rest we enter is the FINAL phase of God’s rest.

See now why Christian service is so vital?

If a believer fails to invest his life in Christ, there won’t be anything for him to enjoy when he gets to heaven.

This future rest consists solely of enjoying the fruit of our work for Christ.

If we have no works, then what is there to enjoy?

Our writer amplifies this truth in verse 10, stating that we rest from our own works.

But since it is God’s rest, it has to be a rest from doing the work of God.

The hard truth: no works, no rest!

Now we know why Paul considered death to be the “last enemy” of the Christian. 1
15:26.

If death ushered us into an eternal bliss where all Christians were equal, regardless of how they served the Lord, then death would be the believer’s LAST FRIEND.

That’s the view many hold, but it is simply not the case.

Death is the last enemy of the Christian because it bring to an end all opportunity to: 1) change into the likeness of Christ; 2) lay up treasure in heave (rewards).

Once we die we will never serve the Lord by faith.

We will walk by sight then.

NOW (“today”) is the time to believe God’s promises and to invest in them.

When we leave this life it will be too late.

There are no make-up classes in Christianity- no second chances.

It is my opinion that the judgment of the believer occurs at death.
This eels necessary since we enter God’s rest, and that rest has to do with our future jobs.

We can hardly be assigned that job until our works on earth have been evaluated.

However, until death strikes our bodies we can work for Jesus as much as we want to.

We can get as rich (spiritual treasure) in Christ as we desire.

The old saying is true, “Only one life will soon be past-only what’s done for Christ will last”

It’s a hard fact, but if a man has no works for Christ, he’ll have no fruit to enjoy in heaven.

He’ll have no works from which to rest, as God rested from His works.

In pressing home the lesson drawn from the failure of the Israelite in the desert, the writer urges his readers to work as hard as they can to enter God’s rest.

In view of all of the glory available to God’s people by faith, He admonishes them to avoid the disaster of unbelief and disobedience.

Because of God’s rest in the future, coming after we die, it is easy to bypass His offers and get involved in the things of this world.

For many, making a living, cancer in the body, or losing a loved one, is more real than anything that God has to say.

It is tragic for Christians not to take God at His Word and believe that Hee means exactly what He says.

Those who trifle with His promises, living for themselves instead of investing their lives with Him, will be horrified when they see what their disobedience has cost them when they stand before Him at the judgment.

It may sound like a contradiction to say we enter God’s rest by hard work, but it is not.

When we understand that God’s rest is a working rest (He’s a hard worker Himself), then it is clear that it can only be shared by hard workers.

Some people work hard in the yards as a rest from their regular labors.

So even to us, often rest means work.

Everything they do in His name will bring a reward, right down to giving a cup of cold water. Matthew 10:42

The harder we work for Jesus in this life, the greater our reward (treasure in heaven).

The greater our treasure, the more we will be able to enjoy the fruit of our labors, even as God does His.

Those who chose to labor for “that which perishes,” will have no fruit to enjoy in heaven. John 6:27
So the law of the harvest also applies to those who are born again.

There is no way to reap unless we first sow.

DURHAM too was entirely sanctified