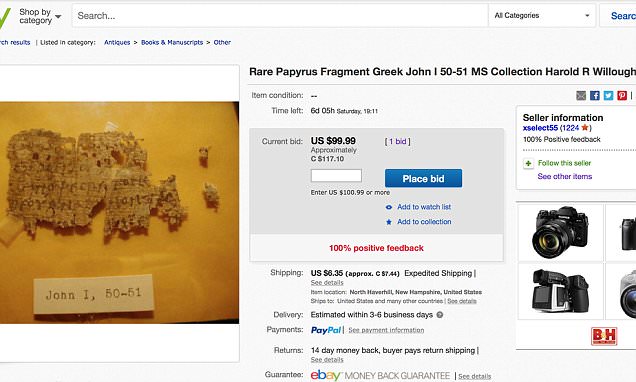 UPDATE Papyri from John 1:50-51 sold on eBay classified as P134 MSS, but considered inconclusive as amulet or later lectionary at best…

After the initial examination of the newly surfaced when sold on eBay MSS we reached to friends in Bremen and Muenster to inquire per the numbering of the papyri as authentic. No official response had been received for well over a month when we decided make contact and ask some questions. The person who picked up the phone at Muenster Uni., at the center where MSS papyri are examined and classified had NO knowledge whatsoever of on P134 and its recent numbering among other authenticated New Testament MSS.

While the discussion in this group was going on, University of Texas published a brief on p134 and its presentation at the 2015 SBL meeting in Atlanta. Much earlier than that, however, Wieland Willker determined it was NOT even John at all “From what I can gather from the verso, it does not seem to be from John. I have a note on it on my blog”

Furthermore, on l. 5, it looks like we have ????????????[, with an apostrophe separating the two gammas. Perhaps the reason why Willoughby who published extensively on Codex 2400 never mentioned this here “1,700 year old” MSS piece. As a result Wieland Willker stopped examining P134 as inconclusive.

After no being able to reach out for any information whatsoever from Muenster and their decision to classify the MSS as P134 MSS, it is only reasonable to agree with Wieland Willker’s conclusion and count out the authenticity of p134 as inconclusive till more is learned about the MSS upon further in-depth known for the MSS. With the current information available the P134 MSS could be considered at best as an amulet or later lectionary. Special thanks to Vessela Kulev Rick Wadholm Jr @Glynn Brown Tommy Wasserman and @Tony Burke for reaching out with information and suggestions in this investigation.

Tommy Wasserman [02/05/2016 2:45 AM]
There are many problems with this blogpost and “investigation”. Since my name is mentioned it should be noted that I do not stand behind it, although I have made several comments to the author in a facebook group. My own report on the papyrus is here: http://evangelicaltextualcriticism.blogspot.se/2015/11/new-papyrus-p134-of-john-report-from-sbl.html

THE LOS ANGELES REVIVAL OF 1918

The fast-growing city of Los Angeles was an important stop on Aimee Semple McPherson’s unprecedented “Gospel Car” tour, which she launched in 1918 to…