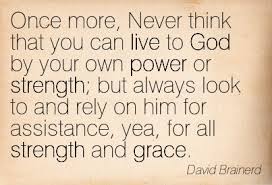 John Kissinger [11/24/2015 12:05 PM]
I have to agree that unmerited favor is an old calvinistic term with too much historical baggage that does not fit Pentecostal theology at all

Terry Wiles [11/24/2015 12:11 PM]
We are saved by faith through grace. The grace is Gods part. The faith (not just believing bit appropriate action) is our part. I too am concerned about the easy grace salvations. Too many have become expert in leading people in a sinners prayer and know nothing about making disciples.

11 For the grace of God that bringeth salvation hath appeared to all men,

12 Teaching us that, denying ungodliness and worldly lusts, we should live soberly, righteously, and godly, in this present world;

Roger David [11/24/2015 12:20 PM]
If we are saved by faith through grace and grace teaches us that we are to deny ungodliness and worldly lusts, and live soberly, righteously, and godly, in this present world, then the modern church sure has messed up grace teachings.

John Kissinger [11/24/2015 1:47 PM]
In the Orthodox tradition, the word Energy is used to refer to God’s grace. Does anyone know where this concept, or definition, of Grace being “God’s unmerited favor” came from? I cannot think of any scripture to back such a statement up… Anyone have some history on this?

Link Hudson [11/24/2015 5:16 PM]
John Kissinger There is something to the idea. In Romans 4, Paul argues that the man who works recieves wages because they are owed him, not because of grace. If is grace, it is not from works. So the idea of getting a gift you don’t earn is part of the thought map of charis.

But in Romans 5 grace also reigns. In I Corinthians, grace labors. The grace in Paul outlabored the other apostles. We have gifts given by the grace given unto us in Roman 12.

In II Corinthians 13, grace shows up parralel with ‘power’ or ‘strength’ in the Lord’s Paul’s answer to Paul’s prayer, “My grace is sufficient for thee, for my strength is made perfect in weakness.”

Gal. 5:4 says you are fallen from grace.- So, God is going to give me something I don’t deserve and then take it away if I don’t deserve it. I’d be better off backsliding so I could get more grace.

Why was Grace upon Jesus?
And the Child grew and became strong in spirit, filled with wisdom; and the grace of God was upon Him. Luke 2:40

Are you fully prepared to say that grace was upon Jesus even though He didn’t deserve it?

Joseph Prince might think grace is the unmerited favor of God..but he should be thankful that God is showing mercy to him and he should pray for grace.

Link Hudson [11/24/2015 8:43 PM]
Roger David, being humble still isn’t enough to merit grace. If a serial killer kills people, but he is humble about it, does his being humble make up for his sin?

If someone is fallen from grace, that doesn’t mean he deserved the grace.

Grace in Jesus’ life does raise a problem for the ‘unmerited’ aspect of the popular theological definition.

John Conger [11/25/2015 9:26 AM]
Novation wrote that God darkens himself that we can know him as light……i think any attempt to define or quantify God (I.e. Trinity, his love, etc) will always fall short

Prophecy given by Kenneth E. Hagin in 2003

Make your church not only a Word church, but a Holy Ghost church. Put the Word first always. Move in the Holy Ghost in…