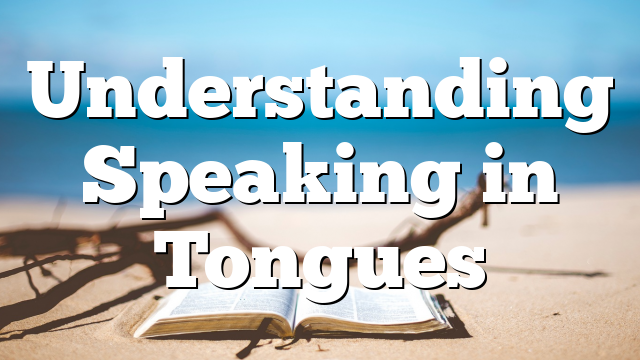 So many people, even among Spirit-filled, Full Gospel Pentecostals and Charismatics, do not have an adequate understanding or appreciation of the practice of Speaking in Tongues. And especially, many Evangelicals and traditional Mainline believers have a confused understanding of what they have not experienced. But, not having experienced something doesn’t make it untrue. The gift is for today, which is clear from both the Word and the experience of millions, yet some preachers will try to explain it away.

It began with the Ascension of Jesus, and his final words reiterating the promise

It began with the Ascension of Jesus, and his final words reiterating the promise:

“Being assembled with them, He [Jesus] commanded them, ‘Do not depart from Jerusalem, but wait for the promise of the Father, of which you have heard from Me. For John baptized with water, but you shall be baptized with the Holy Spirit not many days from now… He said to them, ‘… you shall receive power when the Holy Spirit comes upon you. And you shall be My witnesses in Jerusalem, and in all Judea and Samaria, and to the ends of the earth.’” (Acts 1:4-8)

Then, in Acts 2, it happened: “When the day of Pentecost had come, they were all together in one place. Suddenly a sound like a mighty rushing wind came from heaven, and it filled the whole house where they were sitting. There appeared to them tongues as of fire, being distributed and resting on each of them, and they were all filled with the Holy Spirit and began to speak in other tongues, as the Spirit enabled them to speak” (Acts 2:1-3).

Rather than reinvent the wheel to share on this subject, I found an excellent and very articulate explanation in Andrew Wommack’s commentary on Acts 2:4 (subheads and emphasis are mine):

“It is not completely clear who was included in this ‘they.’ In Acts 1, Luke spoke of 120 men and women being present in the Upper Room, but it cannot be said for sure that all of those were present when the Holy Spirit came. It can be safely assumed that the eleven apostles who were waiting, as Jesus had commanded them (Acts 1:4-5), spoke in tongues. It is also very possible that others or all of the believers who were present in the Upper Room spoke in tongues.

The Gift of Tongues is for All

“Either way, in Peter’s sermon to the people, he quoted Joel 2:28-29, and he interpreted this outpouring of the Holy Ghost ‘upon the servants and upon the handmaids’ as being for all the people who were present (over 3,000, Acts 2:41) and for their ‘children, and to all that are afar off’ (that’s us, Acts 2:39). This forever proves that this gift of tongues was not just for a very few apostles.

“This filling of the Holy Ghost was subsequent to the born-again experience. Paul later revealed in Romans 10:9 that people had to confess with their mouths that Jesus is Lord and believe in their hearts that Jesus was raised from the dead before they could be saved.

“Speaking in tongues is unique to the church age. This is because when we believers speak in tongues, our new, born-again spirits are speaking (1 Corinthians 14:14), not our minds. Before salvation, our spirits were the part of us that was ‘dead in trespasses and sins’ (Ephesians 2:1). Therefore, until we received new spirits (2 Corinthians 5:17), the Holy Ghost could not give us this supernatural communication with the Father.

“However, this experience was prophesied in the Old Testament. Joel prophesied about it in Joel 2:28-29. Peter referred to this passage in his explanation of this miracle. Isaiah spoke very specifically of speaking in tongues in Isaiah 28:11-12, and Jesus also said believers would speak with new tongues (Mark 16:17).

“The other tongues that these disciples spoke in were languages other than their own; they hadn’t learned them before. These tongues were different than the tongues that Paul was giving instructions about in 1 Corinthians 12-14, in that these were known languages.

Two Kinds of Speaking in Tongues

The tongues of angels, or heavenly languages, are the tongues that all Spirit-filled believers can speak in

“This is the only example of believers speaking in known languages that is recorded in the Bible. The other instances of speaking in tongues (Acts 8:18 [implied], 10:45-46, and 19:6) were evidently the heavenly languages unknown to men.

“This speaking in tongues was not as many have envisioned it. The Holy Spirit did not take possession of the disciples to the point that they had no control over what was happening.

“Paul made a special point of this in his letter to the Corinthians about how the gifts should be properly administered. He told the Corinthians to control themselves and not speak in tongues in church unless there was an accompanying interpretation (1 Corinthians 14:27-28). He would not have told them this if they had no control over the gift.

“The gift of speaking in tongues is no different than the ministry gifts listed in Ephesians 4:11. True ministers of God also operate in a supernatural gift when they preach or teach. Peter was being used of the Holy Spirit just as much when he preached to this crowd as when he spoke to them in tongues. Yet no one expected him to simply open his mouth and have God supernaturally control it.

“The Holy Spirit inspires and anoints preachers, but the ministers’ wills are still intact; the degree to which the Holy Spirit uses the message is largely dependent on how much the individuals yield to His control. This is how it is with speaking in tongues. The Holy Spirit gives people the utterance, but they must exercise their faith to speak (Mark 16:17) and believe that the result is inspired by God (Luke 11:9-13).

“Failure to understand this one truth has caused many people to ask the Lord for the gift of tongues and then wait for the Lord to supernaturally move their mouths. If nothing happens, they say that the Lord must not want them to speak in tongues or else it would have happened.

“That is no more true than to say that every person the Lord has called to preach is preaching or every person He has given a prophecy to has prophesied. We have to step out in faith.”

FacebookTwitterSubscribe
Subscribe to receive all news to your email or phone: [wysija_form id="1"]
speakingtonguesunderstanding

Are there good months to schedule a revival?

Are there good months to schedule a revival for your church? Do you make an annual schedule that includes revivals? John Kissinger [09/24/2015 12:27…