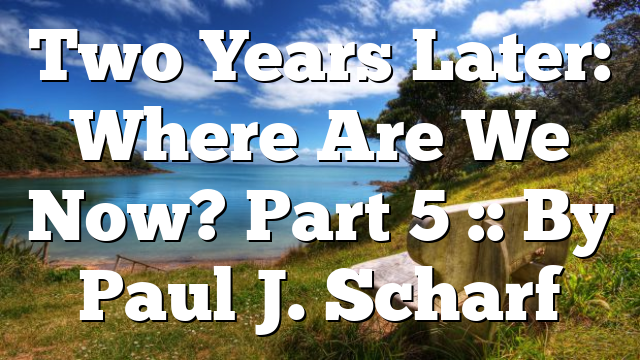 Cybersecurity is a subject about which I know almost nothing and would certainly never give advice.

Yet this is an issue that affects all of us—in our communications, finances, and now, especially, ministries.

So, along with many other people, I am dependent upon the expertise, advice, and assistance of those who really live within this realm of technology.

I am thankful, especially for the help of Steven Lee, the founder of SermonAudio, who visited with me in a video that is posted to SermonAudio.com/pscharf.

“Special Interview with Steven Lee” – video or audio at this link.

In last week’s column, I covered The Vault that SermonAudio is constructing on the campus of Bob Jones University.

“The Vault is going to be playing into a much stronger tomorrow for us,” Lee told me—assessing his situation after SermonAudio suffered a serious cyberattack in March of this year.

The second portion of our interview then focused on cybersecurity.

Among the areas suffering damage were the eDocs sections of each broadcaster’s page—one place where I post my column. Thankfully, that feature is now back up and running.

So, even if I cannot totally understand the technicalities involved, I can picture “the wicked one” pulling “fiery darts” (Eph.6:16) from his quiver and aiming them strategically at one of the most vital positions on planet Earth.

Lee evaluated the effects the attack has had on the entire organization, stating: “This whole exercise has been helpful for us on a number of fronts. Number one, it has kept us extremely grounded in humility. I am proud in a good way of the work that our guys have done, and they work hard, and it usually goes unsung.” Lee believes that such an experience can also bring about an unanticipated result: “to have a period of humility and of trusting God, and seeing God do great things, and of growth, and of strengthening. The great danger for all of us is to have our hearts lifted up with pride—to our destruction. And so, this whole episode was very helpful because it keeps us very humble.”

The cyberattack took its biggest toll on photos on the site. Lee called the incident “extremely painful, very unpleasant and very stressful.” Yet, amazingly, no sermons were destroyed.

“It taught us a lot of things—that week that we were working really, really hard, around the clock,” he said.

“It’s also been helpful, practically speaking, from the standpoint of accelerating the process of us moving to the newer architecture,” Lee stated. “A lot of things that we had projected on a timeline down the road, to be able to get to, well, those things just got moved up to the top of the list.” The matter of repairing the damage actually gave SermonAudio an occasion to implement more new features for broadcasters.

“We’re in a much stronger place today—in every way,” he said. “We are still on a very good trajectory.”

Six days each week, SermonAudio hosts an online prayer meeting via Zoom called Daily United Prayer. I have been privileged to provide the devotional for these meetings twice and will have that opportunity again on Friday, Aug. 19. I invite you to join us by going to SermonAudio.com/UnitedPrayer. It is an awesome thing to gather for prayer with believers from all around the world.

I think that it is also very appropriate that we would pray for God’s hand of blessing and protection to remain upon SermonAudio at this critically important time.

Paul J. Scharf (M.A., M.Div., Faith Baptist Theological Seminary) is a church ministries representative for The Friends of Israel Gospel Ministry, based in Columbus, WI, and serving in the Midwest. For more information on his ministry, visit sermonaudio.com/pscharf or foi.org/scharf, or email [email protected].

The post Two Years Later: Where Are We Now? Part 5 :: By Paul J. Scharf appeared first on Rapture Ready.

A few (Barthian) reflections on tongues as gifted sign