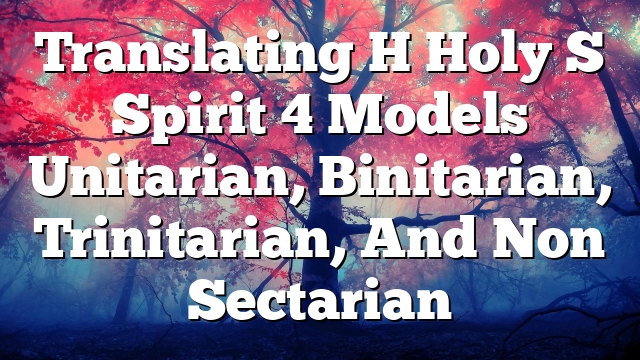 In examining the various theologies and methodologies behind translating H/holy S/spirit, Garrett C. Kenney eﬀectively brings historical, theological, and liturgical concerns into a dialogue that not only traverses the boundaries in his title, but also journeys back in time to consider the Jewish roots of early Christians and the various attempts to deﬁne the H/holy S/spirit in the church. The subject is not new to Kenney, but he has gone beyond his 1999 book John 1:1 as Prooftext: Trinitarian or Unitarian (University Press of America) by adding new methods and passages to the debate. And while his current book might have oﬀered a more extensive conclusion, Kenney has attempted to put aside his personal concerns in order to achieve his goal of being a catalyst for discussion.

As an individual with spiritual roots in Catholicism, Christian Science, and Pentecostal- ism, Kenney admits his ecclesiastical proclivities for the Unitarian and Trinitarian positions while balancing them with his own personal and academic leanings toward Binitarian and Non-Sectarian approaches. In attempting to determine whether to capitalize Holy Spirit in reference to a person or use lower case in referring to “a God-given but impersonal force, power, capacity, or gift,” Kenney presents the four methods clearly and succinctly, ﬁnding strengths and weaknesses in each (xv).

Unitarianism appeals to both Scripture and reason — with the former being a plus and the latter a detractor because matters of faith do not always need to be proved by reason. Binitarianism deals with the worship of Jesus, and thus brings the issue into the realm of liturgy. Appeals to Scripture strengthen this argument, but Kenney questions the value of liturgy in determining theology.

In discussing Trinitarianism, Kenney hopes to avoid bias. Nevertheless, some may ﬁnd him overly critical of this dominant position. The charge may not be entirely warranted, however. The book’s focus on translating Scripture is problematic for Trinitarianism, which appeals more to community and revelation than to the authority of Scripture. Here, Ken- ney sides with liberal mainline denominations who believe that the Trinity is implicitly mentioned in Scripture, as opposed to conservatives who claim explicit references.

Kenney’s presentation of the Trinity should help move the Oneness-Trinitarian debate away from arguments based on Scripture alone, since he ﬁnds proof of the Trinity in “the collective sense and drift of scripture, tradition, and ecclesial religious experience” (53). And although he could have more clearly delineated the diversity of Unitarian views, his recognition of the driving forces behind both Trinitarian and Oneness positions helps push the discussion beyond foundational levels that continue to be rehashed. He calls on both conservative Trinitarians and Oneness adherents to think outside the text and look at the issue of community in ways that will hopefully bridge gaps in this divide.

Kenney ends with the Non-Sectarian model in which he describes the other methods as “paradigms of convenience” that aid in understanding God but often create other misun- derstandings (59). In his conclusion, he admits his preference for this method based on the fact that it encourages tolerance and ecumenical dialogue.

This potential dialogue will no doubt beneﬁt from a well-organized argument that clearly delineates each position. Kenny writes with the heart of a teacher, and his experience as a professor of English and Religious Studies at Eastern Washington University has clearly enabled him to explain key concepts in ways that should make the work accessible to a wider audience. His examples and deﬁnitions stand ready to beneﬁt religion and theology professors looking for clearer ways to explain sometimes foggy theological notions to stu- dents. Kenney’s references to the ambiguity of certain passages reinforce the Non-Sectarian method while recognizing that early Christians might not have been as disturbed by this haziness as moderns. This method also reveals the need for those who espouse the dominant position to consider the other possibilities.

While the various options are easy to follow, the numerous scriptural references might have been placed into charts to help readers. Kenney mentions a “70/30 split” between capitalizing or lowercasing the S/spirit in various translations (14). Charts, including refer- ences, translations, and some form of context or comment, would have helped readers visu- alize each position. Additionally, Kenney’s favorable view of The Message raises questions for an academic audience that may not see value in this paraphrase.

In the end, any questions about Translating H/holy S/spirit are minor compared to this great introduction to an ancient and ongoing issue. The book, however, only serves as a starting point. A more detailed conclusion may have be desired by many readers, but Ken- ney’s goal of encouraging tolerance and ecumenical dialogue superseded the need to answer all of the issues he raised. It is to be hoped that adherents of each method will ﬁnd him a good discussion partner and reference in attempting to deﬁne the H/holy S/spirit.