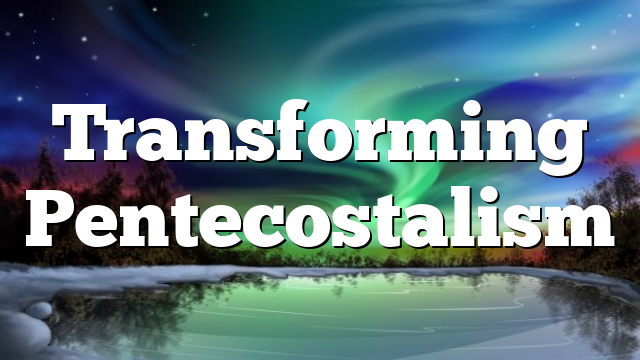 Knowles, in light of Max Weber’s view that “routinization of charisma” is in- evitable, seeks through this publication to understand how the Pentecostal movement in New Zealand from 1920 to 2010 has routinized in its own way. Anecdotally, Knowles notes that the need for such a study is necessary in that understanding how the Pentecostal movement in New Zealand has “trans- formed” within the past eight centuries will, in turn, help those associated with the movement understand where the they may be headed and how to navigate the changes that lay ahead.

Throughout much of the book, Knowles provides fascinating insights into, not just the history of the Pentecostal movement in New Zealand, but also the historical events throughthe United Kingdom, United States,and Australiathat provided catalysts for change. Knowles often attempts to categorize changes via the “integration of transforming insights” which can happen suddenly and the “intersection and interaction of these ideas” (6). These categories provide a “framework” that Knowles employs in explaining how the Pentecostal move- ment in New Zealand has made major shifts throughout the 20th and begin- ning of the 21st century.

Quickly exploring the historical backdrop before the 1920s, Knowles pro- vides fascinating context of the slow changes that would eventually create the fertile possibilities for a flourishing Pentecostal movement, especially as it relates to revival and the expectation of such. Moving through the 1920s, Knowles consistently shows how his research and knowledge within this sub- ject matter is in-depth and vast.

By the time the book reaches the 1970s, Knowles’s work proves even more valuable as it breaks new ground. The last historical look of the Pentecostal movement in New Zealand was written in 1974 by James Worsfold, a prominent figure within the Pentecostal movement at the time.Working through the 1970s requires two chapters as the shifts that happen in this time period are signif- icant. For instance, Knowles provides insight into the “unconscious” swing in the movements shifting theological mentality in this era from one of a doomed earth within premillennial theology to a belief that through social and political means the church could make the world better, or at least slow the process of the impending apocalyptic destruction (155).

It is also in this time period that the Pentecostal movement finds a new strug- gle. Knowles shows that within the 70s there is an increase in the “diversity of origins” (172).With the growth of the movement, more pastors from denomina-

tions and groups not associated with the Pentecostal and Charismatics move- ments began integrating into and leading Pentecostal congregations. Knowles shows, both through his chapters on the 70s and the 80s how this influx of out- side thought and thinking began to cause tension and dramatic change within the movement.

It is insights like these that are found throughout Knowles’s work that dem- onstrates the value of his undertaking. The not so dissimilar origins and cata- lysts for change within the Pentecostal movement in New Zealand have distinct resemblances to the Pentecostal movements in other parts of the world. Even from the beginning of the book, Knowles does not exclude any of the struggles or the victories of the church, for each have an impact in how the movement was shaped over the decades. Often, Knowles reviews census material, the view of the Pentecostalism in the media and amongst other church groups, how the age demographic of the Pentecostal movement created change, and much more. While some histories of Christian movements may narrowly focus on the interpretation of a group based on their theological and biblical underpin- nings, Knowles attempts to view the larger story of this oft enigmatic group of Christians.

Oddly, however, Knowles does not attempt to narrow his discussion by providing a robust definition of Pentecostalism and Charismatic Christianity as it pertains to what he chose to include or not include within his study. This, at times, meant that the inclusion or exclusion of events, ideas, or stimuli for change, was not rigidly decided upon and were up to the discretion of Knowles. A more rigid set of parameters, or at least a more expressed set of parameters, would have been helpful in keeping the flow of the book more consistent.

Overall, Knowles’ work is invaluable to those who will be doing research into the Pentecostal movement of New Zealand. The historical research and detailed exploration of the cultural shifts that affected the movement both from within and without is helpful to those who are interested in how the Pen- tecostal movement in New Zealand became what it is today. This book also postulates insight for those who may do sociological and historical research of the Pentecostal movements throughout the world. However, even with how seminal this book is within the historical and sociological context of the move- ment, the scope of its readership will remain quite limited.