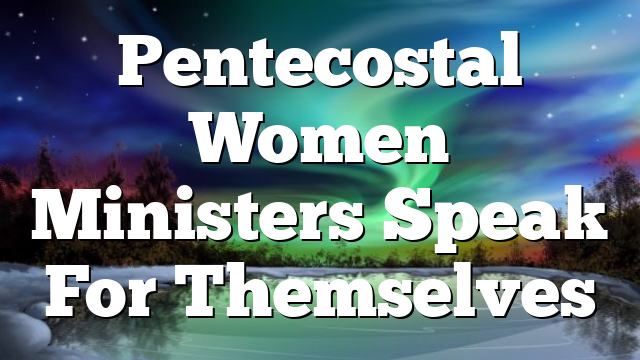 What Women Want: Pentecostal Women Ministers Speak for Themselves, by Kim- berly Ervin Alexander and James P. Bowers, is an empirical study that capably distills the results of a 2012 research survey conducted with Pentecostal women ministers in the United States within the Church of God (COG) denomination. The purpose of this research was to hear directly from women ministers in order to understand their attitudes about equality with their male counter- parts, to give voice to their ministry experiences, and to provide recommenda- tions that would support women ministers in theCOGtradition (3–4). Alexan- der and Bowers succeed in their quest to “move beyond conjecture, specula- tion, and anecdotal limitations” (11) to provide quantitative and descriptive information about these female ministers.

This volume is accessible to a wide audience with a good balance of quan- titative data and narrative engagement. The forty-five-question survey used in the research was completed by 726 female ministers in forty-five states, which represents credible sample of 30.5 percent. Where practical, Alexander and Bowers also make nuanced observations related to different ethnicities represented in the sample. In addition to the pool of female ministers, the researchers invited 1,000 randomly selected male ordained bishops within the COGto complete a similar survey in order to make comparisons with the female respondents. Although a lower response rate of 16 percent response rate was achieved, the inclusion of the views from the male ordained bishops provides a helpful contrast and richness to the study.

Alexander and Bowers organize their research findings about these female ministers under four distinct categories: family values, power and leadership, flourishing ministry, and compensation and advancement. They conclude by describing a portrait of a Pentecostal woman minister and invite an outside researcher to provide an additional perspective.

There are several conclusions that Alexander and Bowers make. First, the majority of female ministers surveyed do not believe that Scripture prohibits them from holding the position of ordained bishop (35–37). Second, that female ministers are not motivated by a “liberal” political persuasion, but instead hold conservative political views (23) as well as traditional family val- ues (25). Third, although women ministers receive positive support from their families, they receive considerably less support from their pastors and denom- inational leaders, which has negatively impacted their ability to develop, flour- ish, and reach their full potential.

In addition to the above general conclusions, Alexander and Bowers reveal that 95 percent of these women ministers receive less than $30,000 annu- ally, which is considerably less than their male counterparts (77). Perhaps this argument could have been buttressed with additional segmentation and anal- ysis, based on similar ministerial characteristics between the male and female populations. For example, the research revealed that 74 percent of female min- isters worked in a part-time capacity, compared to 40 percent of men. If the research captured the number of part-time hours, the salary received could be annualized to allow for a more “apples-to-apples” comparison. Similarly, the argument about the extent of the salary gap for those serving as full-time ministers would have been more compelling if the results had compared full- time ministers by type of position held (e.g., associate pastor, assistant pastor, chaplain, etc.), education of the minister, and size of congregation. Admit- tedly this analysis may not have been possible, given the small sample size involved.

Although this book makes an important scholarly contribution, there are a few areas that could be strengthened. For example, within each chapter there are a number of “Mythbusters” that the authors identify. Unfortunately, the source or origin of the “myth” is not always clear to the reader, particularly if they are outside of the COG tradition. Has the leadership within the COG articulated these positions? Are these myths commonly heard among theCOG General Assembly debates? Are these myths articulated by the ordained bish- ops in the research survey? Although some of the articulated myths do include background material, others do not.The claim to debunk the myths would have been strengthened by providing evidence for each one.

In addition, the reproduction of survey graphs would be greatly improved with larger font size for the text, contrasting colors to delineate the shading on the chart, and improved chart labelling (e.g., indicate whether the chart shows results by percent or some other method). Unfortunately, the reader is not able to quickly grasp the information being communicated as a result. Tables sum- marizing the data might have been another alternative.

Finally, there is information that should be included in the appendices of this book. The forty-five research questions are not provided, which makes it difficult for the reader to connect the questions used, responses received, and conclusions reached. Demographic information that highlights the age, expe- rience, ethnicity, and education of the sample size would have provided an interesting contrast to the demographic profile of the female minister popu- lation of the COG. For example, Appendix 2 shows that 38 percent of female ministers are over the age of 60. How does this compare with the survey sam- ple? Does the age of the minister influence compensation arrangements—that

theymaybemorewillingtoworkpart-timeorforlowsalary?Itshouldbenoted; however, that the absence of this additional information does not negate the value of this study.

In conclusion, Alexander and Bowers have provided COG leadership with much to consider. They have succeeded in providing a credible voice for female ministers who do not currently have a voice in the General Council sessions. The quantitative and descriptive information contained will also be a valuable source of information for other scholars. In their epilogue the authors lament that no substantive change has occurred to-date. I suspect that the transfor- mation these authors seek within the COG will not occur unless a change in the interpretation of Scripture relative to women in ministry takes place.

Some months back I was on an Apologetic site called “Therefore God Exists.” The moderator and others on the site seemed quite knowledgeable and…