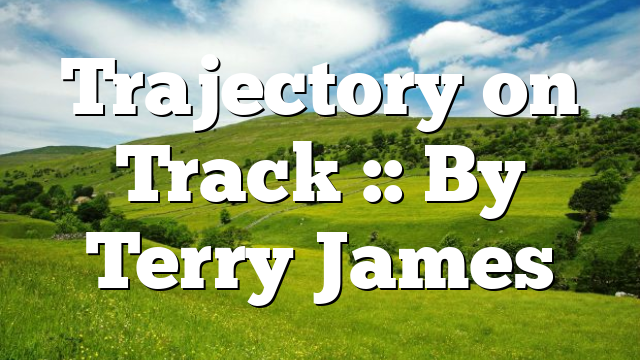 When we gathered in the studio at SkyWatch TV a week or so back, my most recent book was at the center of one of our program tapings. The title seemed to cause hesitation in its pronouncement to some on the panel. I don’t know why—just a matter of verbalization or something, I suppose. I believe it is a very clear, precise word.

We finally got that problem settled and moved forward in capturing the book’s essence on video for airing a week or two from this writing. And there is so much encapsulated between those pages by the seventeen different authors—all supreme observers of these spiritually darkening times.

The problem of the hitch in speaking the title was instantly dissolved when all having the problem got fixed in their thinking on the subtitle of that new book.

The title and subtitle are TRAJECTORY: Tracking The Approaching Tribulation Storm.

From that point forward in covering what we wanted covered for SkyWatch audiences, there was hardly a pause for what to say next by any of the program panelists, which included the host, Joe Horn; Tom Horn, CEO of Defender Publishing and one of the chapter contributors; pastor and author, Carl Gallups; Lt. Colonel Robert Maginnis; and Colonel Tim Moore, host of Christ In Prophecy TV. I, too, was on that panel as general editor of the book.

The reason for never quite being able to catch our breath when going from one prophetic indicator to another, of course, is that there are so many signals assaulting on an hourly basis. We did a total of four programs on this book, plus two other books, and we ran out of time to even come near covering everything by the end of each half-hour of taping.

Just Bob Maginnis’ book, alone, Kings of the East, could have taken up the entire two hours of broadcast time. And China, of course, along with Russia, and their aggressions are but one portion of the geopolitical situation that comprises the ponderings on “rumors of wars.”

It seemed an almost overwhelming task, time-wise, when adding topics involving the absolute evil taking place in societies and cultures of America and the world to the “wars and rumors of wars” coverage we undertook. Joe, among the very best of TV hosts, in my opinion, nonetheless did a tremendous job of keeping us on track, as the subtitle of my book would have it.

Certainly, the trajectory of prophetic progression has this generation on track toward soon entering the Tribulation storm.

Some of the thoughts going through my mind to bring up during those two hours were the following:

I thought we got through much of this list while discussing things in Carl Gallups’ new book, The Yeshua Protocol, which will be out in a month or so. We all concluded that what we see happening with regard to the trajectory this world is on toward suffering that great Tribulation storm foretold by the Lord Jesus Christ (Matthew 24:21) is beginning to take shape more rapidly than we can fully comprehend. We concluded that, beyond any doubt, the prophecy given Daniel is now in process:

“But thou, O Daniel, shut up the words, and seal the book, even to the time of the end: many shall run to and fro, and knowledge shall be increased” (Daniel 12:4).

We only have to consider how this so-called woke insanity with its cancel culture is affecting people who have been inculcated with anti-God, anti-America-as-founded education—how social, mainstream news and entertainment media and even the commercial industry and US military suffer from the upside-down thinking flowing from humanity turning its back on God.

TRAJECTORY: Tracking the Approaching Tribulation Storm projects through seventeen Bible prophecy experts a vivid, in-depth picture of what is happening. Each contributor, with superlative analysis of the issues and events of this end-of-the-age turbulence, lights up in radar scope-like magnification the boiling, end-times clouds and lightning of wickedness approaching from across the prophetic horizon.

TRAJECTORY is now available, and we hope to post the TV programs when they are aired within weeks.

The post Trajectory on Track :: By Terry James appeared first on Rapture Ready.

Muslims have Muhammad, catholics have pope, SDAS have ellen white…..