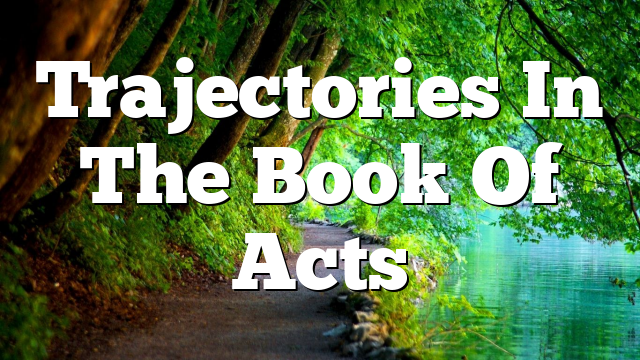 Tis collection of essays on Luke-Acts celebrates the life and scholarship of John Wyckoﬀ, long time professor of New Testament and current Chair of Graduate Studies at Southwest- ern Assemblies of God University (SAGU) in Waxahachie, Texas. Te editors, former stu- dents of Wyckoﬀ, bring together essayists, all of whom share aﬃnity with the Pentecostal tradition. Contributors include longtime heavyweight Lukan scholars such as Robert Men- zies, James Shelton, and Roger Stronstad, as well as colleagues, friends, and former students of Wyckoﬀ.

Te well known contributors address enduring Pentecostal questions involving pneuma- tology and missions. Stronstad suggests that prophecies by the Baptist (Luke 3:16-17) and Jesus (for example, Luke 11:13; 12:12; Acts 1:8) ﬁnd literary and geographic fulﬁllment through Spirit-inspired witnesses. Stronstad oﬀers a succinct Pentecostal synopsis of Spirit baptism, stressing subsequence and the vocational responsibilities of Spirit-ﬁlled believers. Similarly, Shelton examines Luke’s extensive interest in the word group “holy boldness” as the programmatic activity of the church in Acts. Audiences encounter agents who deliver bold witness on account of their association with Jesus (Acts 4:13). Disciples proclaim Jesus not because of membership in a philosophical or political polis, but as courageous subjects of a diﬀerent kingdom ruled by God. Menzies suggests that Luke crafts Jesus’ sending of the Seventy (Luke 10:1-16) in concert with Moses’ desire that “all the Lord’s people were prophets” (Num 11:29). Accordingly, the mission of the Seventy foreshadows Pentecost and the universal potential for every believer to be involved in prophetic vocation. Menzies also ﬁnds Jesus’ instruction regarding itinerant ministry as a literary prophecy fulﬁlled by Spirit-inspired witnesses, people of “the Way” (cf. Acts 9:2).

Turning to Wyckoﬀ ’s former students, Jordan May suggests that Luke functions as a ﬁrst-century reader-response critic; Luke utilizes the Isaianic Servant (Isa 49:6) as a tem- plate for the inaugural mission of Paul and Barnabas and also the ongoing mission of con- temporary witnesses, who bring “light to the Gentiles” and “salvation to the end of the earth” (Acts 13:47). Mario Escobedo II argues that Luke employs ecphrasis, the art of mak- ing hearers into spectators with the goal of imitation, for Acts 2:1-4. Luke recreates the events of Pentecost for his audience in order to provide a model for their imitation, a model also employed by Pentecostals who now constitute Luke’s readers. Paul Alexander and Rob- ert Reid bring Pentecostals into the lively academic discussion surrounding Luke’s political agenda. Reid argues convincingly that imperialism serves as the “cognitive environment” through which ﬁrst-century readers would understand Luke-Acts (24). He argues that the convergence of imperial ideology and Jewish apocalypticism stands as the background to Acts 2; the Lukan Jesus, both supreme Lord and Israel’s Christ, dispenses the Spirit’s power and thus functions as counter-cultural authority to Roman power. Alexander ﬁnds political similarities between Peter, speciﬁcally, via the Pentecost discourse, and the non-violent yet proactive Martin Luther King, Jr. According to Alexander, Peter and King not only chal- lenge evil, but arouse moral consciousness and call for repentance and entry into Jesus’ community of love and justice. Tough Alexander makes no reference to Reid, they share

similar conclusions. Jeﬀ Magruder tackles the ongoing question of subsequence and initial evidence in the Samaritan Pentecost; because of Luke’s emphasis upon glossolalia through- out Acts, Magruder sums up Simon’s observation of Peter and John: “Luke does not say [tongues] explicitly, since there is no need” (299).

Other essayists address a variety of issues. Wyckoﬀ ’s colleague Rob Starner supports traditional authorship by Luke “the beloved physician” and missionary co-laborer with Paul. Starner builds a case for Luke as a qualiﬁed interpreter of Jesus’ ministry. Janet Meyer Everts and Rachel Schutte Baird survey the gender inclusivity of Peter in Acts 2:17-18 and ﬁnd the prophetic ministry of nineteenth century evangelist Phoebe Palmer a persuasive paradigmatic endorsement of women in ministry. James Hernando explores the agency of the Spirit in establishing, sustaining, and extending the church; like ﬁrst century believers, contemporary Pentecostal witnesses must receive both individual and corporate guidance from the same Spirit in order to fulﬁll the apostolic mandate. Roger Cotton examines the exegetical practices of the Lukan Paul by way of a sermon delivered at Antioch of Pisidia (Acts 13). According to Cotton, the Lukan Paul commonly mines the Hebrew Scriptures (speciﬁcally, Ps 2:7, Isa 55:3, and Ps 16:10) for christological elucidation of the gospel mes- sage. Finally, Craig Keener and LeRoy Bartel call upon Pentecostals to observe various speeches in search of models for a Spirit-inspired teaching ministry.

One minor limitation might be the apparent haphazard order of the essays. Tough the foreword by Byron Klaus and the biographical introduction to the life and ministry of Wyckoﬀ by Bruce Rosdahl provide a ﬁtting start, readers would beneﬁt from a short preface by the editors concerning the direction of the work and/or a topical categorization of essays for a smoother ﬂow. But such a small caveat must not undermine the cumulative quality of the essays. Tis work should serve not only as a ﬁne secondary and complementary text- book for courses on Luke-Acts in a Pentecostal context, but also for larger confessional audiences interested in an introduction to classical and current Pentecostal approaches to Luke-Acts. Te graceful tone of seasoned scholars as well as the eﬀorts of numerous up-and- coming Pentecostal Lukan scholars makes this a welcome addition to all students and scholars of Luke-Acts. John Wyckoﬀ should be proud of his vocational investment. Craig Keener, in his essay on Spirit-inspired and academic teaching ministry, places Wyckoﬀ in the good company of Paul, a devoted expositor, academician, and mentor. Indeed, several of Wyckoﬀ ’s former students now serve as colleagues at SAGU or as educators at other Pentecostal institutions. Readers of this volume will surely look for their further contribu- tions down the road.

Revival in America – Ray E Horton “Our country is ready for and in need of revival.” Can you guess who wrote that?  It…