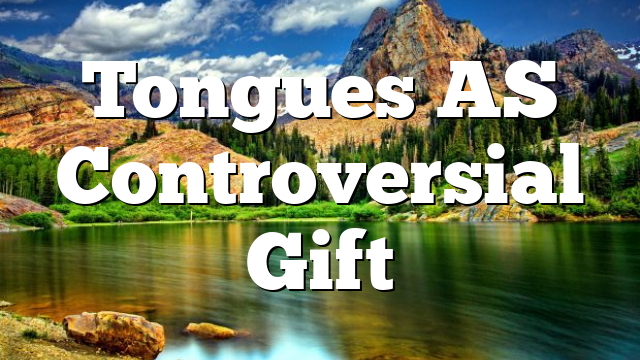 A brief look at the controversial gift of speaking in tongues as the Spirit gives utterance, by Pastor John Lathrop.

The twentieth century has witnessed the rapid growth of two remarkable religious movements, the Pentecostal Movement and the Charismatic Movement. The Pentecostal Movement, which appeared first, attracted widespread attention in the early 1900’s. This was due largely to the revival services that took place at the Azusa Street Mission in Los Angeles beginning in 1906.[1] A little more than fifty years later the Charismatic Movement burst on the scene claiming the same spiritual manifestations that had previously appeared in the Pentecostal Movement. The charismatic renewal, sometimes called neo-pentecostalism, began to make its way into the mainline Protestant churches in the late 1950’s and by 1967 had infiltrated the Roman Catholic Church as well.[2] The impact of these movements has been profound. The sheer number of people involved indicates that. In 1995 the number of adherents to the Pentecostal Movement was said to be 410 million.[3] These movements have touched the world. While there are differences between the two movements, the one thing that they hold in common is the claim to fresh outpourings of the Holy Spirit, complete with healings and the other gifts of the Spirit, including the gift of tongues.

The gift of tongues, referred to by the apostle Paul in 1 Corinthians chapters 12-14, is perhaps the most controversial of the gifts of the Spirit. The reported reappearance of this gift in the Pentecostal and Charismatic Movements has produced responses ranging from joy to horror. The purpose of this paper is to consider the controversy regarding this gift, examine the contribution that the gift can make to the church and to contend for the restoration of this gift to its rightful place in the life of the church.

The gift of tongues is perhaps the most controversial of the gifts of the Spirit.

In dealing with this subject I will focus primarily on Paul’s teaching concerning the gift in his first epistle to the Corinthians. Although speaking in tongues is mentioned in the book of Acts, I will not include it in this paper because it seems to be somewhat different from the gift described by Paul in 1 Corinthians. In Acts more that one person can speak at a time and no interpretation appears to be required.[4] I will restrict my treatment of the subject to the gift proper, which is for congregational use and requires interpretation.

Regardless of one’s theological or denominational persuasion one thing that must be admitted about the gift is that it did exist in the first century church. The apostle Paul makes repeated reference to it in 1 Corinthians chapters 12 and 14. No other New Testament epistle makes any direct reference to this gift. However, this is not to suggest that the gift was something unique to the church at Corinth. The cessationist, Benjamin B. Warfield believed that the gift existed in the apostolic church and that it was not limited to Corinth.[5] In fact he goes so far as to say that an apostolic church without the gifts would be an exception.[6] The gifts, including tongues, were a regular part of church life in the first century.

LET US PRAY FOR PEACE?

LET US PRAY FOR PEACE🙏