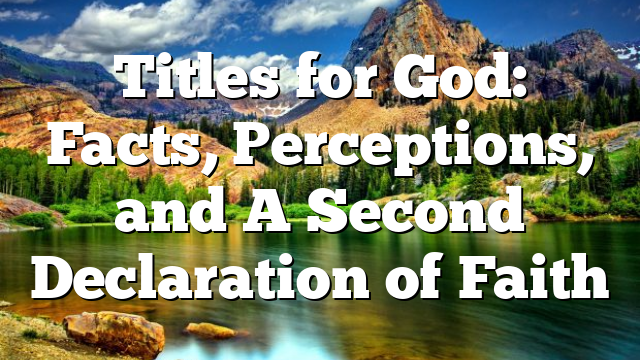 While I will address the content of this item on the agenda for the General Assembly in a future post, I want to deal with the nature of facts and the ongoing effect of adding more statements to the instructions for ministers.

It seems that at least some ministers really do wish to create a body of laws that function as a second Declaration of Faith or a second set of practical commitments. This may be because it is extremely difficult to add to or subtract from the doctrinal and practical commitments, and for good reason. The way around this obstacle seems to be to continue to expand obligations for ministers.

I find this approach to doctrinal and moral issues to be misguided and unwise. I am not questioning the intentions of any person. Instead, let me offer some points as to why this motion misses the mark.

First, every credentialed minister is entitled to a fair trial when charges of violating Church of God teachings are brought. The charge must be brought in writing and signed by the individual making the accusation. This approach will not change regardless of how many statements are added to the instructions for ministers. Proof must be given that is deemed acceptable by a trial board. In addition, the Minutes set forth a clear list of rights for both the accuser and the defendant. The first right for the defendant is innocent until proven guilty.

The purpose of trials is to ensure the fair and just treatment of all ministers. Without a clear process, the Church of God opens the door to private judgments that occur behind the scenes and violate the rights of credentialed ministers. Adopting this statement does not change the right to a fair trial, especially with regard to what may have been said or taught verbally in a classroom.

Second, if ministers wish to add to the doctrinal and practical commitments of the denomination, they should seek to do just that. What this and other ministerial obligations do is make an end run around the process. It would be better simply to expand the statement of the Declaration of Faith on the Trinity than to make a statement claiming that what is not explicit in the article is actually implicit.

The fact is that there is nothing in the Declaration of Faith statement on the Trinity that deals with masculinity or femininity. Statement 2 reads: “In one God eternally existing in three persons; namely, the Father, Son, and Holy Ghost.” What this statement does is set forth the triune name and identity. It says nothing about pronouns.

Third, the Church of God has clear structures for dealing with doctrinal and moral issues. As I have noted, the Executive Committee can and does utilize the doctrine and polity committee to deal with these matters. This is the normal way to deal with issues before considering whether they should be elevated to the level of a doctrinal or moral commitment.

Finally, I have read repeatedly that there is a trend in the Church of God to feminize God. The trend is what makes this item necessary, or so the claim goes. I don’t believe this is the case at all. I have never observed solid evidence of such a trend. There is a perception among some rank and file ministers that this is a trend, but perceptions are not facts. Facts are stubborn things.

A trend is a definite change or movement in a direction that is empirically verifiable. You need to have multiple examples and ground them in research. For example, the sociologists Christian Smith and Melinda Lundquist identified moral therapeutic deism as a trend among younger generations on the basis of surveys and interviews. It was a data dive into youth culture. The data became the basis for the claim.

Persons usually identify social media trends by using analytics from platforms like Twitter and Facebook or companies like Google. Most social media trends, however, are not long-term, which is the second part of a trend that should be identified. A trend is a verifiable, long-term, and persistent pattern. A good example is the resolution and motion on gender identity. While I disagree with the way to approach this issue, there is a clearly identifiable trend at work.

The challenge of social media is that it blurs the distinction between perception/appearance and fact. Social media can make appearances seem like facts through the constant repetition of ideas or slogans. This is how misinformation spreads.

It only takes a few persons to constantly talk about a “liberal trend to feminize God” in order for this perception to be seen as fact precisely because of the way such a claim can go viral. Going viral is only about the number of times something is shared. It says nothing about the factual basis of the claim. Many persons have shared misinformation on social media about churches by creating fake church signs and putting whatever they want on them.

On top of this, most individuals struggle with confirmation bias. This is the tendency to believe something that confirms our existing beliefs. If you read a post about a “liberal trend to feminize God” and you already believe that there is a liberal trend in society at work, especially among academics, then you are more than likely to be biased in favor of believing the post.

The cannibalizing we see happening currently in the Southern Baptist Convention is a good example. The SBC is a deeply conservative denomination and yet there are some on the far right in the SBC who make it appear that the denomination is drifting liberal.

They have used a strategy that combines two sets of slogans. The first is a set of terms that creates a false perception through immediate emotional appeal. An idea or a tweet will be described as an example of wokeness or liberalism at work. A second set of terms creates the contrast. This is where terms like “biblical” or “gospel-based” have been co-opted to reinforce a false perception. Who doesn’t want to be biblical?

With these two sets of slogans, one can talk about being “gospel-based” over being woke or about being biblical vs being liberal. It’s all about creating a perception through repetition that feeds on confirmation bias. The debate within the SBC is whether an orthodox center will hold or a far-right group will take over.

It is indeed ironic that a figure no less than Russell Moore at one point represented the orthodox center in the SBC, but he was driven from the denomination by the very persons on the far right who claimed to be fighting for orthodoxy. Moore called the cannibalism happening a Southern Baptist apocalypse.

If you really believe there is a liberal trend to feminize God in the Church of God, ask yourself how you came to this conclusion. Moreover, ask yourself if you can point to clear examples on social media in which individuals have consistently reinforced this perception by using slogans like “gospel-based” and “biblical” over other slogans like “liberal.” Then, ask yourself how many concrete examples have been given that you can actually verify. If it’s one or two, then it’s not a trend. Instead, it’s one or two persons.

The Church of God already has a process to handle one or two persons. We don’t change our Minutes on the basis of one or two persons any more than a teacher changes her entire approach to the classroom because of one or two discipline problems. We don’t try to create what is effectively a second Declaration of Faith on perceptions that are simply beliefs without a basis in facts. As John Adams, one of America’s founding fathers said, “Facts are stubborn things; and whatever may be our wishes, our inclinations, or the dictates of our passion, they cannot alter the state of facts and evidence.”