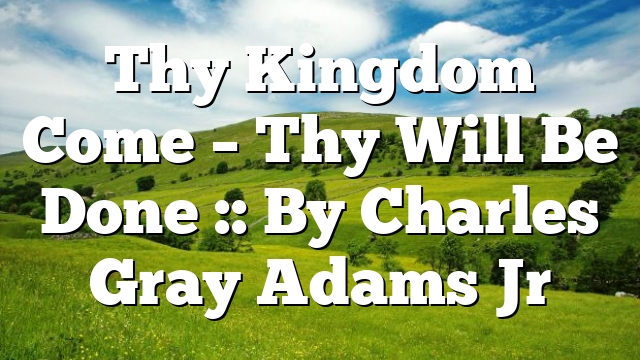 The recent article, “The Great Awakening – The Grand Deception,” dealt with the topic of the currently trending movement to establish the kingdom of God on earth through various approaches, including the “Seven Mountain Mandate.” [1] Those who are devoted to this particular method desire to overcome the world by exerting dominance in seven primary spheres of influence: education; religion; family; business; government/military; arts/entertainment; and media. Each ‘kingdom now’ system has the same goal in mind: establish the physical kingdom of God on earth, “now.” This article will provide the antidote to this fallacy, Scripture rightly divided, which indicates the kingdom of God is currently only spiritual as the physical kingdom will only come when Jesus returns to the earth at the end of the Tribulation (Rev 20:1-6). Therefore, our heart’s cry must be, “Thy Kingdom Come – Thy Will Be Done.”

Incredibly, the Jewish Nation had the same problem expressed by many of the kingdom-now adherents; they desired the physical kingdom more than the spiritual kingdom. We all know how things worked out for them. They began by rejecting the true Messiah and calling for and witnessing His execution. If this wasn’t bad enough, they even called for His blood to be upon them and their children (Matt 27:25). Remarkably, they sealed this decree when they began to persecute and slay those who did receive the spiritual kingdom, the Christians, a group of believers made up of people from all nations. Essentially, the Jews established a witness against themselves by persecuting and even murdering the righteous. God will use this witness to judge righteously all who do not repent.

A good example of one who did repent is Saul of Tarsus, who was once a noted persecutor of Christians before his encounter with Christ on the Road to Damascus (Acts 9). Once he met Jesus, whom he immediately called Lord, which is another word for King, he repented and never again sought to harm the righteous. Consequently, Saul was renamed Paul, and he did much to further the spiritual kingdom of God. Paul’s life demonstrates the possibilities available to all who repent of any errant belief system.

The aforementioned misstep made by the Jews can be used to establish a historical representation of the mistakes being made by those who adhere to the kingdom-now fallacy. You see, God had already provided, in Scripture, all the Jews needed to know about the First Coming of Christ. Isaiah said Christ would come as a suffering servant, a lamb led to slaughter (Isa 53). David said Jesus would die as one who was poured out like water, one whose bones were out of joint, and whose garment was the subject of lot casting (Psa 22). Sadly, this is not the king the Jews desired. They wanted, instead, a lion who would crush the Romans.

This is the same mistake being made by the kingdom-now adherents. They desire a kingdom that is mighty upon the land, a kingdom that overcomes the world. However, this does not square with Scripture. You see, the kingdom of God was not of this earth when Jesus was on the earth the first time because He came as the Lamb to be slain (Rev 13:8). Upon His ascension, He left the Church here to fulfill the Great Commission while awaiting His return. [2] This is all the Scriptures say about the earthly goals of the Church. Therefore, just like the Jews who rejected Christ the first time, those building the physical kingdom now are missing the mark, terribly.

The root of the problem is simple. Both of the aforementioned groups are/were looking for the manifestation of a physical kingdom in order to fulfill their own desires. However, the Lord has provided in exacting detail the manner in which His kingdom will come to earth. One need only read the books of Daniel and Revelation to understand what God has in store.

In summary: at any time, the rapture will take place, and the Church will be removed from earth (1 Thess 4:13-17). Those who miss the rapture will enter into the Tribulation, which is prophesied to be a seven-year period of utter devastation (Dan 9:27). During this time, the antichrist will rise to power, and those loyal to him will slay all who will not worship him (Rev 13). At the same time, God will be pouring out His righteous judgment upon the unrepentant in the seal, trumpet, and bowl judgments (Rev 6-16). During this time, the earth will suffer unimaginable chaos and become increasingly hostile to the human inhabitant. [3] It is at the end of all of this that Jesus will return to earth to establish His kingdom (Rev 20:1-6).

Needless to say, this is not a time to be desired by anyone. Unimaginably, those deceived by the kingdom-now heresy reject sound doctrine and actually believe, instead of tribulating, they will be rising to power via the aforementioned methods designed to conquer the world systems. Sadly, if they fail to repent, this errant desire will lead them down a path that ends with them working for the end-time false one-world church – the Whore of Babylon (Rev 17). By the way, they will be just like Saul of Tarsus and pursue, persecute, and slay the Tribulation saints (those who come to faith during the Tribulation) with incredibly religious fervor.

What is a kingdom? A kingdom is somewhere a king reigns. The term reign implies that the king’s will is done; therefore, he is king. Simply put, a kingdom is a place where the will of the king is followed by those over whom he reigns.

According to Jesus, the kingdom of God comes when God’s will is done. He taught this when He taught the disciples how to pray:

“After this manner therefore pray ye: Our Father which art in heaven, Hallowed be thy name. Thy kingdom come. Thy will be done in earth, as it is in heaven. Give us this day our daily bread. And forgive us our debts, as we forgive our debtors. And lead us not into temptation, but deliver us from evil: For thine is the kingdom, and the power, and the glory, for ever. Amen.” [4] (emphasis mine)

Therefore, praying for God’s will to be done on earth as it already is in heaven is essentially calling for God’s kingdom to come into existence on the earth. This is realized in two ways. First, Jesus will come to earth, bringing the physical kingdom with Him. Secondly, the kingdom spiritually exists within the hearts of men who seek and follow the will of God, making Him their King.

If you think about it, some of the greatest successes in the Bible were accomplished by those who followed God’s will without hesitation, even when what He said to do made no sense to the natural man. Noah built an ark when God told him to, saving his immediate family from the global flood (Gen 6). Moses, with the children of Israel penned against the Red Sea, was told to raise his staff and raise his hand over the sea, and a great escape ensued (Ex 14). Hebrews chapter eleven is filled with examples of the faithful who simply believed God and did His will, to the death. The New Testament is also filled with one example after another of those who sought and followed the will of God even though it cost them their lives. All of these resided within the spiritual kingdom of God.

One last consideration. Why is the spiritual kingdom not good enough for some? Why must there be a physical kingdom, now? The answer is actually very simple. Those who desire the physical manifestation of the kingdom of God now are more interested in their own will than the will of God. Jesus described this when He spoke of who would enter into the kingdom of heaven:

“Not every one that saith unto me, Lord, Lord, shall enter into the kingdom of heaven; but he that doeth the will of my Father which is in heaven. Many will say to me in that day, Lord, Lord, have we not prophesied in thy name? and in thy name have cast out devils? and in thy name done many wonderful works? And then will I profess unto them, I never knew you: depart from me, ye that work iniquity.” (emphasis mine)

Jesus clearly identified those bound for the kingdom of heaven; they are those that do the will of the Father in heaven. Notice, He also identified the reason for the rejection of those will not enter in; they did what they desired to do, in His name. This means they were serving their own will and simply attaching the name of Jesus to whatever they were doing at the time. [5] This is a far cry from seeking and following the will of God, no matter the cost.

Many have attempted to forge the kingdom of God on earth to no avail. Try as they might, one failure after another abounds. This is because anything short of God establishing His kingdom is not God’s kingdom at all. Remember, God no longer dwells in temples made by man (Act 7:48). Instead, He resides in the hearts of those who follow His will (Isa 57:15; 1 Cor 3:16; John 14:23; Col 1:27; Eph 3:16-17).

With all of this in mind, the true desire of a believer must be ascertaining the will of the Father in heaven and fulfilling it. In regard to the coming kingdom, there can be no mistake, God has already told us how this will happen, and He expects us to be about His business (The Great Commission) until the Son comes for the bride. Therefore, just like the builders of the wall in Nehemiah’s day, who worked with one hand to build the wall and held a sword with another (Neh 4), let us be busy building the spiritual kingdom of God while watching for our soon coming King.

“Jesus saith unto them, My meat is to do the will of him that sent me, and to finish his work.”

1] For greater understanding, see the article, “The Great Awakening – The Grand Deception.”

[2] For greater understanding, see the article, “While We Wait.”

[3] For greater understanding, see the article, “Open Letter to Those Who Miss the Rapture.”

[4] “Unless otherwise noted, all biblical passages referenced are in the King James Version.”

[5] For greater understanding, see the article, “Thy Will Be Done: The Epicenter of Right and Wrong.”

The post Thy Kingdom Come – Thy Will Be Done :: By Charles Gray Adams Jr appeared first on Rapture Ready.

Pentecostalism in a Postmodern Culture

Daniel Rushing has recommended Pentecostalism in a Postmodern Culture by Wes Granberg-Michaelson is the author of From Times Square to Timbuktu: The Post-Christian West…