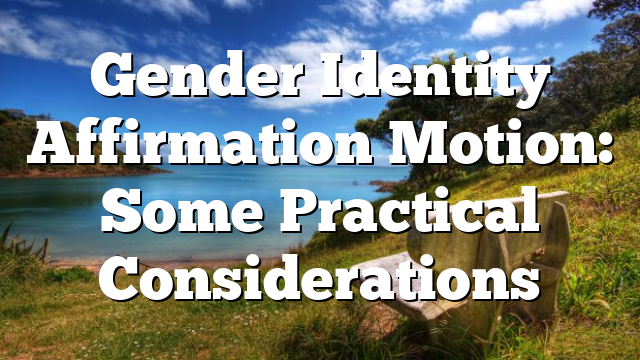 I am burdened by the Gender Identity Affirmation motion that is item #7 on the agenda for the upcoming General Council. This is not the first General Council item I have been disturbed by and I am sure it will not be the last. Such is the nature of political discourse within the church.  No doubt many of us have been disturbed by motions over the years and rightly so. Debate, discussion and disagreement are all a part of the ecclesial process.

First, let me be clear that I am not opposing this motion or its wording on theological grounds. My opposition stems from practical concerns. I wonder how the disciplinary action tied to this measure may negatively impact the lives of many COG clergy. Again, I want to be clear that my statements here are not to be construed as an argument against the theological concerns the motion raises.

Instead, my concern relates to the wording of the motion. It unnecessarily burdens those COG clergy who may not have the privilege of serving fulltime in a church. What this measure fails to consider is that far more COG clergy are bi-vocational than not. Many of our clergy work in schools as well as state and federally sponsored agencies that require respectful communication and relationship with all individuals. There are others who work in privately or publicly owned businesses and entities that require the same.

Most of these entities – especially those that are county, city, state, and federally operated – require employees to demonstrate civility and respect to those who may choose to identify as a different gender, non-gendered, gender fluid, transgender, third gender, genderqueer, etc. by utilizing the preferred names and pronouns of these individuals. From a Human Resource perspective, if individuals are not respected by failing to use their chosen name, gender, or pronouns, this can be interpreted as creating a hostile workplace. If the General Council passes this measure as it is, we will effectively force our bi-vocational clergy to choose between “disciplinary actions” within the denomination they love and feeding their families.

This measure also unnecessarily burdens those who engage in marketplace ministry. I am thinking of those who serve outside of the Church of God (who, by the way, are not exceptions to the policy of the denomination). These ministers face a similar fate by virtue of being employed by private, state, or federally run hospitals, prisons, and corporations that require the same decorum. If this measure is passed in its current form, the ministries of those who operate outside of the church will also be threatened. In fact, it will most likely mean that these ministries will cease to exist, and we will all be the poorer for it.

There is some precedent for my request. In the early General Assemblies (1908-1912), the Church of God took a stand against the use of tobacco. Those who used tobacco could not become members without giving up the practice (nothing was said about attending a Church of God congregation). This led to the question of those whose financial livelihood depended on selling tobacco or rolling cigars.

The General Assembly advised that such persons could continue this work at least for a period of time until they might be able to find other employment. The difference between the precedent and our current context is that bi-vocational clergy and clergy serving in the marketplace are unlikely to find employment where usage of chosen gender terms is not required. Following this precedent, if we as a body are going to stick with this measure, could we not make provision for those who this item might injure the most?

It is tempting and much easier to live in a black and white/all-or-nothing world. Unfortunately, that is not the world in which we live. I ask that we as a denomination consider the significant, unintentional impact that such action would have on many of our brothers and sisters who are out in the field, giving their lives for the church and the kingdom.

Tim Cranfill, DMin, DCoun, LPC, BCC, HEC-C is Clinical Faculty in Counseling, Pentecostal Theological Seminary, Director of Pastoral Care for Northeast Baptist Hospital, and Director of Medical Ethics for Baptist Health System (a six hospital healthcare system in San Antonio, Texas). Tim is also a published author in the field of fetal loss and related grief. As a credentialed Church of God minister, Tim is a board-certified chaplain through the COG Chaplains Commission and the Association of Professional Chaplains. Tim is also a Licensed Mental Health Counselor in Texas and runs a small private practice. He was also recently nationally certified in healthcare ethics.

Why Is God Not Speaking To You? | Perry Stone

If you feel as though God is not speaking to you, then listen to this! #perrystone #prophecy #mannafest Perry Stone or anyone from our…