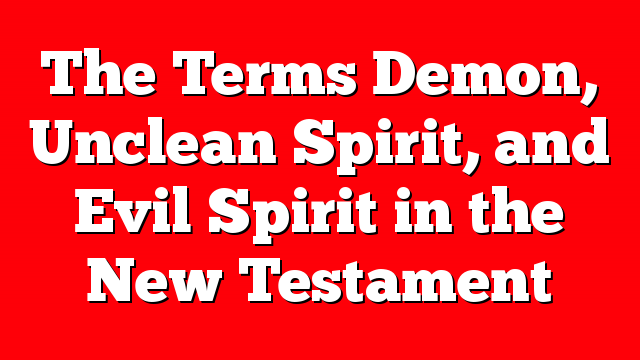 In the New Testament we find three separate terms that are used as complete synonyms: demons, evil
spirits and unclean spirits.
Some obvious examples of how these three words are related can be seen in the following
passages in the Gospels, starting with Matthew.
Matt. 10.1 And calling His twelve disciples, He gave them authority over unclean spirits 5 (so
as to cast them out), and to healing every sickness, and every weakness.
Matt. 10.8 “Infirm – heal, dead – raise, lepers – cleanse, demons 6 – cast out; freely you did
receive, freely give.”
In most translations of the Bible Jesus refers to unclean spirits in verse one, but calls them
demons in verse eight. So we can see that Jesus uses the words demons and unclean spirits
interchangeably, as synonyms. It is important to note that in verse one, before He mentions healing the
sick and every disease, Jesus instructs His disciples to cast out demons. This is because we
frequently see in the New Testament that deliverance from demons was a prerequisite to healing.
Mark 6.7 And He calls the twelve. And He began to send them out two by two. And He gave
them authority over the spirits, the unclean.7
Mark 6.13 And many demons 8 they cast out. And they anointed with oil many infirm, and they
healed them.
Chapter 6 of the Gospel of Mark contains the same story that is found in Matthew chapter 10.
Although in Mark 6.7 Jesus gives His disciples authority over the spirits that are unclean, in verse 13
Mark records that they cast out demons. So you can see that Mark uses the words interchangeably,
exactly the same way that Matthew does. Jesus gives His disciples authority over unclean spirits and
then they cast out demons. Therefore, both Matthew and Mark see the terms unclean spirits and
demons as synonyms.
When we examine the story of Mary Magdalene in Luke 8, we see that Luke alternates between
the terms demons and evil spirits.
Luke 8.2 And certain women, who were healed of evil spirits 9 and infirmities, Mary who is
called Magdalene, from whom seven demons 10 had gone forth…
First Luke says that these women were healed of evil spirits, but then Luke says that Mary
Magdalene was delivered of seven demons. So Luke agrees with Matthew and Mark that the terms
evil spirits and demons are synonyms.
In fact when you read through all the parallel accounts in the Gospels concerning evil spirits,
demons and unclean spirits, you will see that throughout the Gospels these words are used completely
interchangeably.

“Cast thy bread upon the waters: for thou shalt find it after many days.” – Ecclesiastes 11:1 Last year I prayed with a girl….