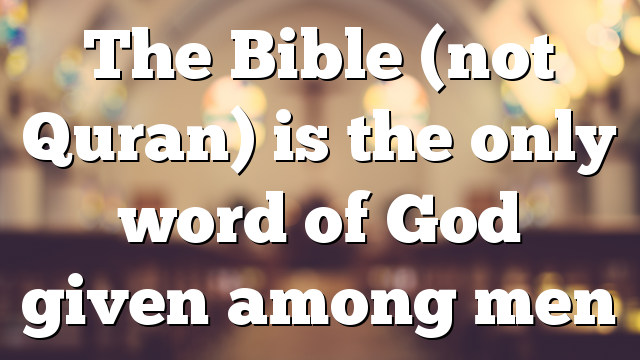 The schools, churches, institutions that are already set up to interact online are currently in a much better position to have some semblance of continuity with their constituencies. Those who are behind the curve might as well be considered off grid totally. I’m working on writing a course guide and book and video series about Islam. I am estimating it will be a two-year project. Here are some shocking details that most Christians,

Muslims and secular people do not know: The Bible (not Quran) is the only word of God given among men.

The Quran was written down over a period of 200 years beginning in 691AD with redaction’s completing around 830 A.D.. This is 60 to 200 years after Muhammad supposedly died. This amount of time makes it mythical. There is absolutely no written evidence of any Quranic versus anywhere before 691A.D. on the Dome of the Rock! All the people who knew Muhammad were dead before the first verse of the Quran was written down by Abd al- Malik – the man who built the Dome of the Rock in Jerusalem. All the writings on the inner & outer ambulatory of the Dome of the Rock are the first mentions of anything to do with the Quranic versus; the name: Muslim; the name: Islam and the name: Muhammad. This is 60 years after the supposed death of Muhammad in 632 A.D.. All the words that were later put in the Quran, which are first written inside the Dome of the Rock are words spoken: against Jesus against the church and against the Trinity. The Bible was written down 15 to 60 years after the ascension of Christ, with the first book Galatians written around 48 A.D. and the last one Revelation written down around 90AD. This makes the Bible historical based on eyewitnesses and written down before the first generation had passed. 70% of the words in the Quran are plagiarized from non-Muslim sources such as Syriac Christian and Jewish non-biblical writings. The Qurann has no quotations from the New or Old Testament. All of the Old Testament references found in the Quran come from Jewish apocryphal writings not the actual Bible. All of the New Testament references found in the Quran come from heretical Gnostic writings not the actual Bible. The Quran mentions the name of Jesus 92 times; it only mentions the name Mohamad four times. If any of the above details were true about the Bible that are true for the Quran, both Judaism and Christianity would have been relegated to the dustbin of history 2000 years ago!