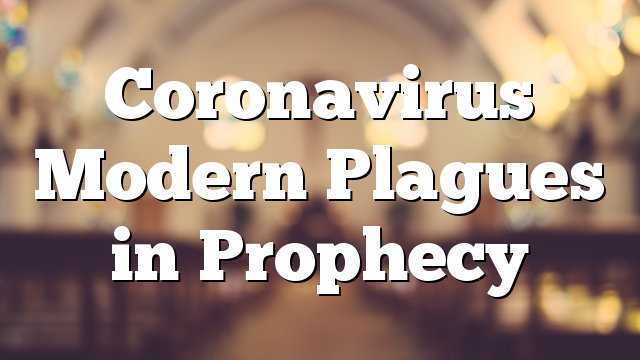 Coronavirus and Other Modern Plagues in Prophecy

The Bible is clear: These diseases will worsen. Here is what you need to know.

Authorities say the numbers of dead and infected could keep multiplying for weeks or months. This is partly because before Wuhan, the Chinese city where the illness broke out, was placed on lockdown, some 5 million potentially infected people left it for other parts of China and the world! Infections have been confirmed in Australia, Belgium, Cambodia, Canada, Egypt, Finland, France, Germany, India, Italy, Ivory Coast, Japan, Malaysia, Nepal, the Philippines, Russia, Singapore, South Korea, Spain, Sri Lanka, Sweden, Taiwan, Thailand, the United Arab Emirates, the United Kingdom, the United States and Vietnam.

Several of these nations are reporting not just infections from the outbreak, but deaths!

The official story from the Chinese government is that the virus originated in a Wuhan wet market where animals that normally would not come into contact with each other—wolves, koalas, snakes, rats, peacocks, foxes, salamanders and dozens more—live in crowded and unhygienic quarters, awaiting slaughter to be sold as food for people. The government says conditions in this market enabled trans-species mutations of pathogens that eventually leaped to humans. But a study published by the Lancet on January 24 shows that the first three infections, documented in early December, had no link to this wet market. Nor did 11 other cases among the 41 analyzed in the study.

So the true cause of the coronavirus may still be unknown. This also shows that it broke out earlier than China’s official reports say, and that it then went undetected for an unknown amount of time.

There are many worrying unknowns about this new illness. But there are some sobering big-picture truths that we can know—and must!

The biblical book of Revelation is primarily about “things which shall be hereafter,” or events that would come after the Apostle John’s era (Revelation 1:19). In Revelation 6:1-8, God inspired John to discuss the “seven seals” that lead up to Jesus Christ’s Second Coming. The first four seals are commonly called the “four horsemen of the apocalypse.”

These horsemen symbolize the end-time culmination of the most devastating woes endured by mankind because of his rebellion against his Creator!

In his description of the fourth horse and its rider, John writes: “I looked, and there was a pale green horse! Its rider’s name was Death, and Hades followed him …” (verse 8; International Standard Version). This symbolizes catastrophic disease epidemics. The passage states that along with the other three riders—which represent religious deception, war and famine—the anemic horseman that represents disease will end up killing “the fourth part of the earth.” With today’s population of some 7.8 billion, that death toll would come to nearly 2 billion people!

Revelation is not the only book in the Bible to warn about an end-time return of disease outbreaks. Jesus Christ Himself said pandemics of pestilence would happen before His return: “For nation shall rise against nation, and kingdom against kingdom: and there shall be … pestilences … in divers places” (Matthew 24:7; see also Mark 13:8 and Luke 21:11). Pestilence in this context means disease outbreaks on a massive scale.

These are not dusty old prophecies. They are mostly for our time today! They are dramatic, dire prophecies whose fulfillment lies directly before us! Multiple millions of people are prophesied to perish from sickness and disease!

So we should expect diseases like this new Wuhan coronavirus to get worse, and to eventually spread like medieval pandemics and kill millions of people! Whether or not this specific new outbreak will cause such ruin, these prophecies are sure.

No More, No Less

In Zechariah 6, you can find symbolism that relates to that of Revelation 6. It is important to note the time frame described in this chapter. Verses 10 through 12 show us this is about the modern day. They discuss a dual crown being given to a man just before Jesus Christ returns—a prophecy that was recently fulfilled (request my free book The New Throne of David for an explanation). Before that takes place, though, four chariots emerge from between two mountains, symbolizing the two present members of the eternal God Family: God the Father and Jesus Christ (verses 1-3).

The black horses here are a representation of violence, famine and pestilence. It is clear that God sends these chariots out to the four quarters of the Earth. Notice verses 4-5: “Then I answered and said unto the angel that talked with me, What are these, my lord? And the angel answered and said unto me, These are the four spirits of the heavens, which go forth from standing before the Lord of all the earth.”

These spirit beings that take on the appearance of horses have been “standing before” God and receiving clear instructions about how they should proceed. They are “of the heavens,” which means they are not Satan and his demons, who have already been cast down from heaven and confined to this Earth (Revelation 12:9-12). These spirits in Zechariah 6 originate from God’s own throne room, and their chariots are commanded to go “to and fro” across the Earth—into the four quarters (verses 6-7).

This is discussing a worldwide effort that will occur during the Great Tribulation and Day of the Lord. Angelic beings are already being positioned and instructed for these catastrophic events! But God is in close control over exactly how much devastation these beings are allowed to unleash. He is not destroying indiscriminately: He is punishing the world in love and in measure—to help mankind turn from the paths of destruction to the way of truth and peace! God will allow the diseases and other afflictions represented by these horses to affect mankind to precisely the degree needed to help them repent—no more, no less.

The Wuhan coronavirus is only a small part of the overall picture. Other plagues are already spreading in cities closer to home.

Many American cities are facing a crisis of homelessness. In downtown Los Angeles, for example, is a little city of homeless people called “Skid Row.” The area is awash in drugs, trash, human feces, rats and every imaginable kind of filth. The squalor is causing soaring rates of diseases such as aids, hepatitis A and Shigella. And it is leading to outbreaks of some diseases that haven’t been common in the developed world for hundreds of years!

Last year, Los Angeles authorities declared Skid Row a “typhus zone.” Numerous residents are also contracting tuberculosis. Even some police department employees have contracted these Third World diseases. Some experts warn of the onset of bubonic plague—a disease that wiped out much of Europe in the 14th century! We are ignoring that history, and officials are permitting these conditions to ripen within some of our mightiest cities!

Similar circumstances are found in parts of Baltimore, Seattle, San Francisco and other cities. Travel guides advise visitors to avoid parts of such places to avoid infection.

It is such an awful scene, we can hardly even stand to hear the news about it! Yet it is just a small foretaste of the plagues coming to America, Britain and Judah (the nation called Israel today) if people don’t repent before God!

And who knows how many other illegal aliens snuck across the border without being caught or counted?

This is dangerous for a number of reasons, including pestilence! “Communicable diseases do not stop at international borders,” said a recent report from the Federation for American Immigration Reform. We don’t have to look far to find evidence proving this true!

In Louisiana last year, an outbreak of the mumps at a U.S. Immigration and Customs Enforcement (ice) facility forced officials to put hundreds of detainees in quarantine. Around the same time, U.S. Customs and Border Protection Commissioner Kevin McAleenan told reporters that illegal aliens were overwhelming border officials and posing serious health risks. “We are seeing migrants arrive with illnesses and medical conditions in unprecedented numbers,” he said. Meanwhile, eruptions of viral diseases at immigration detention centers in Arizona, Colorado and Texas prompted members of Congress to ask ice’s acting director what was being done.

It would be naive not to see that with so many people you are likely to have diseases being brought in and spread around. Yet despite all these concerns and despite proven outbreaks, illegal aliens keep pouring into the country so fast that few are adequately checked for infectious diseases. The health-care situation at the border now, according to a statement from a former Department of Homeland Security official, is just “one major incident away from a catastrophe.”

The factors needed for a crisis are all present! How close might the U.S. be to a real catastrophe?

The Stampede Will End!

Where is this leading? We are already experiencing the preliminary stages of what the Bible terms “great tribulation,” in which one third of the populations in America and other Israelitish nations will die—before being directly attacked by foreign enemies!

These horsemen of Revelation and the horses of Zechariah 6 are going to stampede over the Earth! God is already beginning to send a number of globe-rattling events our way! The Wuhan coronavirus and the other diseases breaking out today are only the beginning. He is going to let the world see where its evil ways are leading.

We frequently emphasize in the Trumpet and our other literature that the loving God takes no pleasure in seeing His future children suffer. He wants people to “prosper and be in health”! (3 John 2). Christ came so we could “have life” and “have it more abundantly” (John 10:10). In Exodus 15:26, God specifically promised the people of ancient Israel that if they obeyed Him, they would never have to suffer any diseases!

The trouble was that ancient Israel—like the nations of modern Israel and the rest of the world today—did not obey God. Instead it rejected Him and His law of love. So instead of prospering and being in health and having real, abundant life, people suffer.

It pains God to know that the suffering is about to get much, much worse. It grieves Him to consider the diseases and other horrors soon to be visited upon Earth. But it is all part of His plan to teach man the absolute necessity of obeying His law. And scripture after scripture shows that God’s plan will succeed!

This world, with its horrific diseases and countless other troubles, will soon be replaced. At His Second Coming, Jesus Christ will accomplish what the most brilliant doctors, scientists and other experts have utterly failed to do: He will bring lasting peace and perfect health to all men, women and children. Deadly diseases like the Wuhan coronavirus, typhus, bubonic plague, tuberculosis and all others will vanish and never return.

God has a lot to accomplish with His people in the midst of an explosion of satanic chaos! He sends these angelic beings out with specific jobs, all in preparation for the Great Tribulation, the Day of the Lord and the Second Coming of Jesus Christ! He is already preparing for that crisis of crises!

Any different between tattoo and tribal mark?

Pls any different between tattoo and tribal mark…. answers with edification