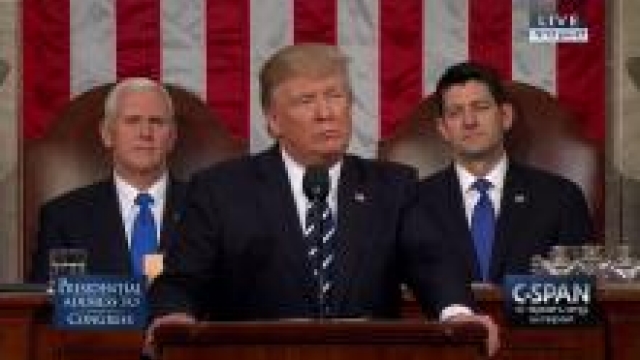 President Trump delivered his first address to a joint session of Congress less than two months after taking office. He reflected…

1969 State of the Union Address

President Lyndon Johnson delivered his final State of the Union Address to Congress on January 14, 1969, less than a…

2016 State of the Union Address

President Obama delivered his seventh and final State of the Union address to a joint session of Congress, in which he outlined his…

State of the Union Address

In his annual State of the Union address to a joint session of Congress, President Obama outlined his priorities for legislative…

President Trump will focus on opportunities lifting up all Americans, and review his accomplishments in the first year, the official told reporters. Specifically, Trump’s State of the Union address will focus on five major policy areas:

1. Jobs and the economy

The president will discuss how the economy is faring under his leadership, specifically focusing on deregulation efforts and the tax cuts passed in 2017.

The president has said he wants a $1.7 trillion infrastructure deal — however, the details the White House has laid out so far give no proposal on how to pay for it. The senior administration official called it a trillion-dollar plan, but could not give an exact figure.

On Thursday, the White House rolled out a bare-bones legislative framework on immigration. The must-have list includes $25 billion for a trust fund for a border wall and other border security measures, a path to citizenship for 1.8 million “Dreamers,” an end to what the White House calls “chain migration,” and an end to the diversity visa lottery system.

The president plans to address his vision of America first on trade. Expect his remarks to reiterate the points he made in his address in Davos, Switzerland, on Friday. There, he promoted the notion of America first — but not America alone. The theme of that speech was “America is open for business.” He invited other countries to invest in in the U.S. and said he wanted to negotiate “mutually beneficial” bilateral trade agreements, and expressed a willingness to revisit the Trans Pacific Partnership (TPP) “if it is in the interests of all.”

The president will emphasize rebuilding the military, and promoting peace through strength. He will also discuss a return to clarity in who America’s friends and adversaries are, the senior administration official said.

Missing from that policy preview list was health care. The senior administration official declined to say whether that would be included in the president’s address. After the GOP failed multiple times to repeal and replace Obamacare last year, Congress appears to be moving on to other matters.

‘The Weight of History’: Two Christian Congressmen Visit the Land of Israel

‘The Weight of History’: Two Christian Congressmen Visit the Land of Israel