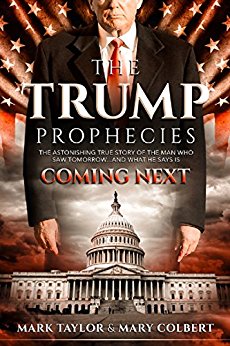 In November of 2016, the world witnessed the impossible. Nearly every household in America was tuned in to the election feeds, and every update pointed to a loss for the Republican Party. But when the map of the states flipped red in the final hour, there were a select few who weren’t surprised. They had always known Trump was going to win. He was chosen for such a time as this. The prophecy had said so.
This prophet, this reserved man of God, was retired firefighter Mark Taylor. The word given by the Holy Spirit was delivered on April 28, 2011 in the middle of the most debilitating sickness a man could ever experience. When the prophecy later fell into the hands of New York Times bestsellers Don and Mary Colbert, God used this new team of passionate individuals to lead the nation into a fervent prayer chain that would accomplish one of the most incredible miracles our country has ever seen.

But Trump s victory was only the beginning…
What is coming next for the most powerful nation on earth today? Mark Taylor has more to say.

In THE TRUMP PROPHECIES readers will discover:
*How the Lord can and will use anyone regardless of education, background, or health to communicate His message to the Church of Christ
*What led to the miracle of the 2016 election, the role of we the people for the will of God in the future, and what the Body of Christ needs to do to keep His blessing on our nation
*How the enemy has utilized techniques of distraction to keep the Body’s focus off of God and onto internal, demoralizing disputes and how this can be overcome
*Astounding, world-altering changes in our US government Mark sees on the horizon
*The positive message of hope and encouragement that points to fresh methods of spreading the Gospel to the lost.

FacebookTwitterSubscribe
Subscribe to receive all news to your email or phone: [wysija_form id="1"]
astonishingcomingmanmarkpropheciesstorytaylortomorrowtruetrump

The Joy Of Early Christianity: Gifts of the Spirit

Sample from “The Joy Of Early Christianity” from the chapter on the gifts of the Spirit. Copyright 2019   These gifts are supernatural, however,…