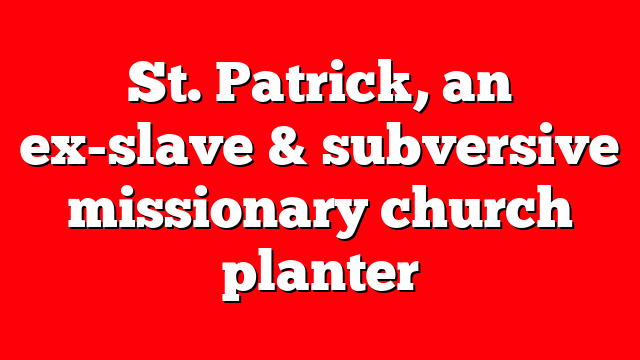 The mention of St. Patrick, for most people, conjures images of all things green, from rivers to donuts to shamrocks, and everything between. St. Patrick’s Day parades and parties in many places around the world are often raucous and wild. They are a strange sort of celebration to bear the name of a man whose missionary legacy is worthy of remembrance.

At age twenty-two, he stood on the dock before the boat’s steersman, hoping he could persuade the man to bring him on board. The previous six years had been cruel to the young boy who was abducted by barbarian pirates and made to be a servant in a strange land. Now, the tired British fugitive had escaped his slave-master and hurried undercover to a coastal Irish port.

Getting to the port meant a two-hundred-mile footrace with little to his name and few who would befriend him. But he made it. And now all that stood between him and his freedom was a rough gang of crewmen that were reluctant to grant him passage. Were it not for a miraculous last-minute change of heart by the steersman, he would have never boarded his getaway vessel. The crew set sail for the British Isles. Soon he would be home.

Or so he thought.

“It was God’s mercy and kindness to Patrick—a freed captive and redeemed sinner—that allowed him to celebrate the redemption of his earthly enemies.”

Three days by sea and twenty-eight across uninhabited land left the runaway worn and hungry, although never without faith in the Almighty’s provision. And God did provide. His life, though threatened, was spared through dangers and deprivation, but only before the youth would experience, yet again, forced labor in captivity.

He would spend two months with his new captors until the Lord delivered him to resume his homeward journey. Only after this arduous trek from Ireland to Britain did the boy’s dispirited family finally wrap their arms around the neck of their long-lost son. Hearing his stories of slavery and escape, they mourned his tribulations and promised his safety henceforth.  “Stay with us”, they pleaded with tears, “never again leave our sight!”

But God had other plans for Patrick.

Not long after his return home, in a dream Patrick would hear the voices of Irishmen crying from the forested coastlands, “We beg you, holy youth, that you shall come and shall walk again among us.” Upon waking, he was pricked at heart. His newly revived faith roused deep brokenness for his former captors. Ireland desperately needed the gospel, and who would bring it to them if not he?

Against considerable opposition from family and friends, Patrick left his newfound comforts and gave his life to the cause of gospel advancement among the Irish, who were known for idol worship. Enduring insults from unbelievers, slander from believers, imprisonment, and discomfort, he held to his belief that Ireland needed Christ. The very ones who trafficked him in his boyhood, who brought him considerable tribulation, threatened affliction, promised terror, assured imprisonment—it was these for whom his compassion could not die.

And why? Patrick tells us.

After just a few decades, more than a thousand Irish would profess faith, by Patrick’s own reports. But his influence didn’t end with his converts. The zeal and scope of his mission served as a model for his newly-planted Celtic churches. Their desire for and devotion to global gospel advance would lead to the evangelization of the British Isles, Gaul, and Central Europe in the centuries that followed.

“I cannot be silent about the great benefits and the great grace which the Lord has deigned to bestow upon me in the land of my captivity.”

Today, we stand on the shoulders of the saints who’ve gone before us. Their story is the preface to our story, and we have much to learn from their faithfulness and trial.

At least three things stand out as lessons we can learn from St. Patrick’s legacy.

It was God’s mercy and kindness to Patrick—a freed captive and redeemed sinner—that allowed him to celebrate the redemption of his earthly enemies. He writes, “I cannot be silent about the great benefits and the great grace which the Lord has deigned to bestow upon me in the land of my captivity; for this we can give to God in return after having been chastened by him, to exalt and praise his wonders before every nation that is anywhere under the heaven.”

So this St. Patrick’s day, wear your green and pinch each other red, even dance to the tune of Irish bagpipes. But don’t fail to reflect upon the legacy of the early pioneer missionary whose labor advanced the gospel among many of our Western ancestors. How beautiful are the feet of those who preach the good news (Rom. 10:15).