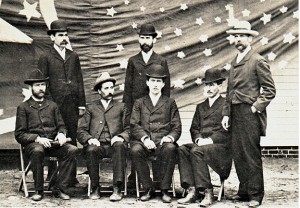 John Kissinger [03/12/2016 8:12 AM]
Charles F. Parham was by far not the first to make this theological connection or praxis. Dr. HAROLD HUNTER builds an excellent case in The FORGOTTEN ROOTS OF THE AZUSA STREET REVIVAL http://cupandcross.com/the-forgotten-roots-of-the-azusa-street-revival/ A detailed account of the 19th century Irvingite Church and its founder Edward Irving; who they were, what they believed, and why they are considered the source of the modern tongues movement is found here http://charlesasullivan.com/1826/the-irvingites-and-the-gift-of-tongues/

John Kissinger [03/12/2016 10:47 AM]
Already listed in the article as: 1896 – Over 100 people baptized in the Shaerer schoolhouse revival conducted by the Christian Union in the North Carolina mountains http://cupandcross.com/speaking-in-tongues-in-america-prior-to-the-azusa-street-revival-of-1906-diamonds-in-the-rough-n-ready-pentecostal-series/

Timothy Carter [03/12/2016 11:53 AM]
Church of God was Sparking in Tongues before the out brake out, at Azusa. We are NOT, a result of the Azusa thing. We were having Biblical experience before them.

John Kissinger [03/12/2016 11:56 AM]
Cashwell came from Azusa to preach Pentecost in the Carolinas after he received the baptism in LA. Upon arriving in his hometown on Dunn, North Carolina, in December 1906, Cashwell immediately preached Pentecost in the local Holiness church. Interest was so great that in the first week of January 1907 he rented a three-story tobacco warehouse near the railroad tracks in Dunn for a month-long Pentecost crusade, which became for the East Coast another Azusa Street. In the next six months Cashwell completed a whirlwind preaching tour of the Southern states which established him as the “apostle of Pentecost to the South.” On a trip to Birmingham, Alabama, in the summer of 1907, he brought the message of Pentecost to A.J. Tomlinson, general overseer of the Church of God in Cleveland, Tennessee, and to H.G. Rodgers and M.M. Pinson, later founders of the Assemblies of God. David Lewayne Porter http://www.pctii.org/arc/synan.html

Jason Strickland [03/12/2016 12:31 PM]
The book called “Like a Mighty Army” is great read . It explains a lot of the Pentecostal background in America

Jason Strickland [03/12/2016 12:46 PM]
R. G. Spurling (1857–1935), a Missionary Baptist minister, and his father Richard Spurling (1810–91), an ordained elder, rejected some of the views of the Baptists in his area as not being in accord with New Testament Christianity. R. G. Spurling disagreed with Landmarkism, an ecclesiology which held that only churches descending from churches with Baptist doctrine were true Church and that they should not associate with Christians of other traditions. Spurling felt that there needed to be another reformation of the Church that went beyond the Protestant Reformation so that Christians would be united together by love and not by creeds, which he believed divided. As long as something was not contrary to the New Testament, believers should be able to practice their faith in the form they chose.[25]

FacebookTwitterSubscribe
Subscribe to receive all news to your email or phone: [wysija_form id="1"]
Pages: 1 2 3 4 5
americaazusaourcogpriorspeakingstreettongues