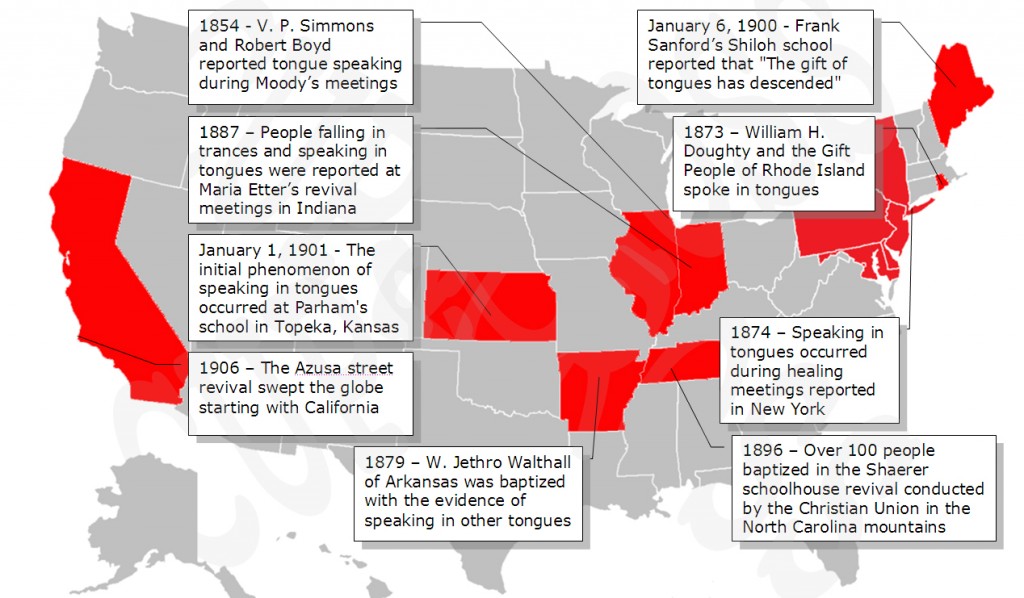 John Kissinger [03/12/2016 8:11 AM]
Corey Forsyth Not much record about this in America. First person to speak in tongues in the Assemblies of God was William Jethro Walthall of the Holiness Baptist Churches of Southwestern Arkansas. Then we have the Molokan immigrants in L.A. (known to have spoken in tongues in Russia under the Old Faith movement there) and the Irvingite (known to have spoken in tongues at Edward Irving’s Scottish revival meetings). 1854 – V. P. Simmons and Robert Boyd who were Irvingites reported tongue speaking during Moody’s meetings. Of curse, there are many reported in various European countries all through church history, but as far as America goes this seems to be it (documented). Dr. HAROLD HUNTER builds an excellent case in The FORGOTTEN ROOTS OF THE AZUSA STREET REVIVAL http://cupandcross.com/the-forgotten-roots-of-the-azusa-street-revival/ A detailed account of the 19th century Irvingite Church and its founder Edward Irving; who they were, what they believed, and why they are considered the source of the modern tongues movement is found here http://charlesasullivan.com/1826/the-irvingites-and-the-gift-of-tongues/

Jimmy Humphrey [03/12/2016 8:12 AM]
I’m Pentecostal but I don’t believe speaking in tongues has to be “the initial physical evidence.” Indeed, Jesus said the sign of the baptism wasn’t any particular manifestation, but rather, it was the demonstration of power. “You will receive power…”

Corey Forsyth [03/12/2016 8:23 AM]
Well since Brody opened up the can of worms… LOL Let’s define tongues. Are we talking about a heavenly prayer language that is personal to each or are we talking about the Upper Room encounter where otherwise ignorant people begin speaking in foreign languages to spread the Gospel to other nationalities? The problem I have with tongues is the ease of manipulation and the focus put on it from an emotional standpoint. I do not deny the gift of speaking in tongues in existence or operation, however, I see a lot of gifts left out because they are as easily mimicked. And before anyone tries to bite with overly anxious fangs, I am not indicating that the majority of tongue talkers are fake but enough are that cause concern and caution from me. Let the hate begin… LOL

Brody Pope [03/12/2016 8:51 AM]
So its safe to say that if you don’t believe that tongues is the initial physical evidence of the baptism of the Holy Ghost, then you’re not a TRUE Pentecostal.

Stan Wayne [03/12/2016 9:01 AM]
I agree with IPE and think without it the dilution of congregations into mainline evangelicalism is evident.

Christopher Hart [03/12/2016 9:28 AM]
I’m not sure where you have seen this, or if perhaps you have mistaken the position some hold (like myself). I do not any longer believe that Scripture teaches tongues as the (exclusive) initial evidence of a believer being filled with the Spirit. An evience, yes. The evidence, no.

However, I do believe tongues are available to all believers through Spirit fullness/baptism, and that they are intended to be normative in the Spirit filled life, as well as in the life and ministry of the church (along with all the other gifts). So, I certainly don’t preach or teach against tongues. Rather, like Paul, I would that all should speak in tongues.

Terry Wiles [03/12/2016 9:30 AM]
Perhaps this link will clarify that speaking in tongues is one of the fundamental differences of the Pentecostal Movement that began in the early 20th century.

John Kissinger [03/12/2016 9:41 AM]
Christopher Hart wrote “The Bible no where teaches that tongues are THE initial evidence of Spirit baptism” – WRONG!

Timothy Carter [03/12/2016 9:58 AM]
Brody Pope, to say, that a person is not Pentecostal because he or she does not understand or have acceptance for the traditional, Mainline view on, initial evidence, is not a fair statement. It seems, that it would be better, to say, “The believe of Holy Spirit baptism, without initial evidence of speaking in tongues, is non-traditional.”

Being Pentecostal, is much more than believing a specific point about tongues.

To say that someone does not believe the Scripture, based on the point of initial evidence of Holy Spirit baptism, is reaching too far.

Yes, I believe that, speaking in tongues is the initial evidence.

With this statement, with this belief, we are stating, gently , yet very clearly, that if a person has not yet, had the experience of speaking in tongues, then they are not baptized in Holy Spirit.

However, we must understand, that this belief in initial evidence of the baptism is speaking in tongues, comes from, a testimonial, presentation of individual experiences, people in the Bible have had.

We can’t find a 1-2-3, step program, like we can for salvation. Therefore, this point will forever, be debated.

People will forever use, “Experience Theology” ( made-up term for clarity), for this point.

Just as much, as it is a weak argument come to say, ” tongues is the initial evidence.” Based on personal experience.

We need to focus on the Word not personal experience.

To say, ” Tongues is not the initial evidence, because, many people fake, speaking in tongue,” is a weak argument.

Preaching can be faked, just watch TBN. Does this mean that preaching is not real?

Miracles, can be faked, look at historical records. We will find, throughout history, that so-called, Miracle healers have been con men.

Does this mean that Miracles are fake? Absolutely, not.

We do not get our understanding, for the gift of Miracles, or the calling to preach, from experience. We understand and accept both of these as well as, all the others , as being, created, and ordained by God in Scripture.

John Kissinger [03/12/2016 10:43 AM]
Christopher Hart The passages from Acts and other NT books have been already supplied in this discussion – pls see above. There is also the historical contribution of Pentecostal authors and ministers in 19-20c. America who all agreed even before Parham and Seymour that the Bible is quite clear on speaking in tongues being the initial evidence of the baptism of the Holy Spirit. A few early examples were already listed here with dates, chart and full bibliography: http://cupandcross.com/diamonds-in-the-rough-n-ready-pentecostal-series-complete/

Thus, currently and historically, the modern day Pentecostal community around the globe has long agreed on the initial evidence from being the Biblical foundation of the doctrine of the Holy Ghost baptism. This agreement has further concurred with virtually all historical examples throughout church history that date as far back as the Day of Pentecost 2,000 years ago.

It is understandable that some may have an interpretation of these passages that deviate from the sound Pentecostal doctrine and its historical development. Such deviations are minor in comparison to the broader Pentecostal movement of almost 700-800 million strong. The ones who fall in this minority are more than welcome to start new threads on each of the passages they are concerned with and explain their deviating interpretation for the group to take under consideration.

Nelson Banuchi [03/12/2016 11:09 AM]
Questions: Does classical Pentecostalism teach that professing Christians who do *not* speak in tongues:

1. are carnal, not being filled with the Spirit?

3. raise doubt that they are even saved in the first place?

4. are more liable to easily fall into sin or apostasy?

Christopher Hart [03/12/2016 11:30 AM]
1. Yes — though depending on which vein, some would have emphasized their not being sanctified which would have meant to them not Spirit filled either.

2. No, but could mistaken for such.

4. Yes, but again one side would emphasize sanctification on this point more than Spirit baptism itself.

Since it can’t be made from scripture, it certainly would be easier to make the argument that speaking in tongues is evidence that the speaker is chock full of the Holy Spirit. . . . . if a few more prominent Pentecostals/Charismatics listed above would have lived consistent overcoming Godly lives. . . . .

John Kissinger [03/12/2016 11:53 AM]
Christopher Hart There’s no problem with your interpretation except that it is your private interpretation and is invalid for the whole Pentecostal movement worldwide. That’s all!

The Baptism of the Holy Spirit

7. The Baptism in the Holy Spirit

All believers are entitled to and should ardently expect and earnestly seek the promise of the Father, the baptism in the Holy Spirit and fire, according to the command of our Lord Jesus Christ. This was the normal experience of all in the early Christian Church. With it comes the enduement of power for life and service, the bestowment of the gifts and their uses in the work of the ministry. •Luke 24:49 [KJV/NIV] •Acts 1:4 [KJV/NIV] •Acts 1:8 [KJV/NIV] •1 Corinthians 12:1-31 [KJV/NIV]

With the baptism in the Holy Spirit come such experiences as:

8. The Initial Physical Evidence of the Baptism in the Holy Spirit

The baptism of believers in the Holy Spirit is witnessed by the initial physical sign of speaking with other tongues as the Spirit of God gives them utterance. •Acts 2:4 [KJV/NIV]

THE BAPTISM OF THE HOLY GHOST

We believe that the Baptism of the Holy Ghost is an experience subsequent to conversion and sanctification and that tongue-speaking is the consequence of the baptism in the Holy Ghost with the manifestations of the fruit of the spirit (Galatians 5:22-23; Acts 10:46, 19:1-6). We believe that we are not baptized with the Holy Ghost in order to be saved (Acts 19:1-6; John 3:5). When one receives a baptismal Holy Ghost experience, we believe one will speak with a tongue unknown to oneself according to the sovereign will of Christ. To be filled with the Spirit means to be Spirit controlled as expressed by Paul in Ephesians 5:18-19. Since the charismatic demonstrations were necessary to help the early church to be successful in implementing the command of Christ, we therefore, believe that a Holy Ghost experience is mandatory for all men today.

tj [03/14/2016 3:05 PM]
in I Cor 1:2 Paul says he wrote “to the Church of God which is at Corinth” and then in verse :10 he talks to the “brethren.” So Paul is talking to believers. In ! Cor 14:5 Paul says, “Now I wish you all spoke in tongues.” Paul is telling believers he wishes they all spoke in tongues – so not all believers did…or do. But then, thats just what the Bible says, you mansplainers have different views.

Update 8-17-22 The depth of the Deep State, directed by the globalist elites – the proverbial cream of the crop – is bottomless. It is so extensive that even those of us aware of the satanic agenda at work in the world today cannot truly comprehend how pervasive it is. And what is this Deep […]