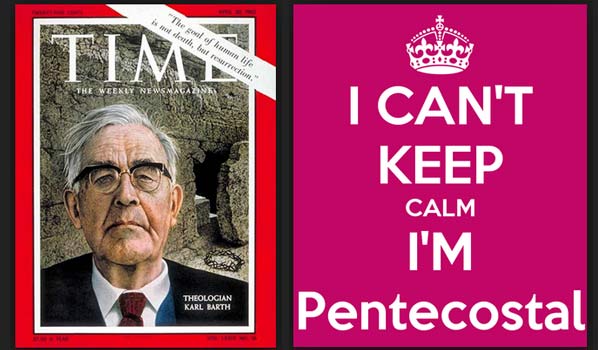 Pentecostal Theology [06/24/2015 6:53 PM]
another attempt to and yet explore how the theology of Karl Barth might serve Pentecostal ministry and experience http://pentecostalbarthian.blogspot.com/

Pentecostal Theology [06/24/2015 6:57 PM]
Top 3 reasons Why Pentecostals like Barth may be: (1) his open approach on human free will, (2) he’s Trinitarian and (3) he’s so big on God’s love. Pentecostals are also big on love. Charles Page has experienced first hand the Pentecostal first love…

Pentecostal Theology [06/24/2015 7:03 PM]
Sin may have taken our free will in bondage as Luther explains, but sin can never take the free will human decision to love back when he/she is loved. Hence, the salvific plan of God to love the world thus allowing the creation to freely chose to love back the Creator

Barry G. Carpenter [06/24/2015 7:23 PM]
Wow…I don’t know if those who like Barth really know him and Neo-Orthodoxy. Bart is a “slippery” one because he uses protestant/reformed terminology but he changes the meaning. Barth tries to take a mid-ground position by denying liberalism and denying Reformed theology. He begins down his slippery slope by denying inerrancy: “As truly as Jesus died on the cross, as Lazarus died in Jn. 11, as the lame were lame, as the blind were blind, […] so, too, the prophets and apostle as such, even in their office, even in their function as witnesses, even in the act of writing down their witness, were real, historical men as we are, and therefore sinful in their action, and capable and actually guilty of error in their spoken and written word (Barth, 1963 [1938], Church Dogmatics- I/2, 529). He goes so far to say that error in the BIble is necessary to prove grace: “For that reason every time we turn the Word of God into an infallible biblical word of man or the biblical word of man into an infallible Word of God we resist […] the miracle that here fallible men speak the Word of God in fallible human words – and we therefore resist the sovereignty of grace…” (CD- I/2, 529). This places him in the category of “un-orthodox” (to say it say kindly as I kind). His view of Scripture places him outside of orthodox Christianity.

America, a Nation Under Siege. This powerful book written by…

America, a Nation Under Siege. This powerful book written by Dr. Robert White. There are powerful forces at work in America to make…