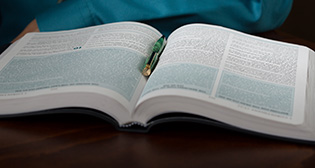 PERRY STONE STUDY BIBLE: As you may be aware, I have been stirred in my spirit to produce a Perry Stone Hebraic/Prophetic Study Bible, gleaning…

by Daniel G. McCrillis, Th. D. It is no mystery to Bible scholars that the New Testament was not written in the Classical Attic,…

The Bible Project As you may be aware, I have been stirred in my spirit to produce a Perry Stone Hebraic/Prophetic Study Bible, gleaning…

We are undertaking the task of comparing and reviewing a growing number of Study Bibles appearing on the book market recently in what appear to be a 21st century Revival of Study Bibles. We will be including some classical titles as well, but overall this study will have three parts dealing with three distinct types of Study Bibles namely: (1) Non-Pentecostal, (2) Pentecostal and (3) Prophecy Related. The following titles are among the ones we have chosen to review in the course of the study:

F. Sanders (a.k.a. Theologue) has further compiled a comprehensive list of study Bibles, which we truly recommend.

Joseph Castillo: Is this in #CHINA preacher?