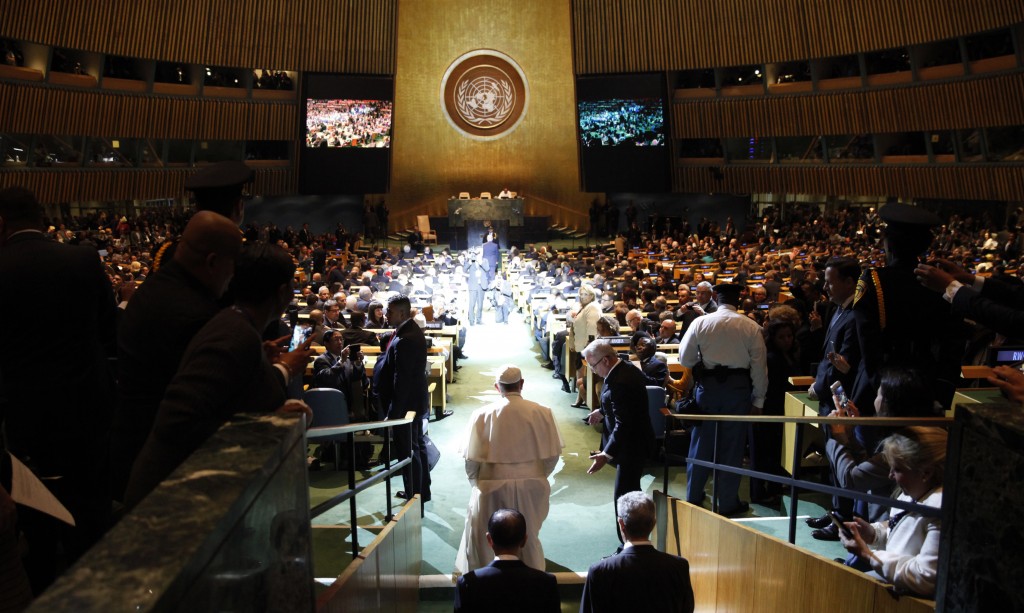 Mr. Pontification himself has shown his stripes in public, declaring the need for a “global public authority” and a “central world bank” to rule over financial institutions that have become outdated and often ineffective in dealing fairly with crises. In what might be the biggest case of pot and kettle ever recorded, he condemned what he called “the idolatry of the market”.  If ever there was some entity that knew about idolatry it would be the Roman Catholic Church.

Earlier in the year the Pope urged for the establishment of a “true world political authority”.  So now, not only has he called for a centralized political leader, he is now calling for a one world economic authority as well!

Of course this is all planned.  They created the financial problem through derivatives, then offer the solution which was the planned outcome all along.  There will be some calamity that threatens the whole world wide market, probably the upcoming Israeli war with Iran or perhaps a total collapse of the internet, wiping out all transaction records and statements.  They will then sit back and watch as the markets across the globe drop by thousands of points a day and wait for the public to demand, ney beg their “trusted” leaders to save them.  They will then usher out a new one world currency which was the plan all along.  The financial elite put their people in all positions of power in order to control the outcome.  Goldman Sachs has bought off all possible political opposition as they financially rape the world and be heralded as heroes.

You will beg for their solution.  You will be told you won’t have a pension if something isn’t done, your entire life savings will be gone.  You’ll watch as the market ticker on the TV falls like a rock as they report live from supermarkets being emptied and lines outside of banks wrapping around the block.  They’ll make you suffer, probably for months as they scramble for answers.  Then they’ll come out of their office and proudly make a press conference on a solution they’ve struggled with for a long time.  If you want to save what you have left in the bank before it is all lost, if you want to buy food and sell your products in a way that will stabilize world markets and prevent this from ever happening again…you’ll take this mark.

It’s just a chip, it’s painless, it goes on your hand or your forehead and it will keep this from happening ever again.  All you have to do is swear allegiance to this wonderful world leader who has given this to you and simply call him god and you’ll get your pension back.  If not, you’ll starve or be shot as an economic terrorist.  You will BEG for their chip.

Rev 6:5-7
When the Lamb opened the third seal, I heard the third living creature say, “Come!” I looked, and there before me was a black horse! Its rider was holding a pair of scales in his hand. Then I heard what sounded like a voice among the four living creatures, saying, “A quart of wheat for a day’s wages, and three quarts of barley for a day’s wages, and do not damage the oil and the wine!”

Rev 13:16-18
He also forced everyone, small and great, rich and poor, free and slave, to receive a mark on his right hand or on his forehead, so that no one could buy or sell unless he had the mark, which is the name of the beast or the number of his name. This calls for wisdom. If anyone has insight, let him calculate the number of the beast, for it is man’s number. His number is 666.

This Pope should be watched very carefully.  We are warned of a false prophet that accompanies the Antichrist that forces people to worship the image of the beast.  This false prophet makes up the 3rd part of the satanic trinity that the Devil establishes during tribulation.  You see the Devil is a counterfeiter who tries to emulate God and his Son and the Holy Spirit.  The beast or antichrist would represent Father God, the image of the beast would represent Jesus the Son, and this false prophet is the counterfeit of the Holy Spirit.

Then I saw another beast, coming out of the earth. He had two horns like a lamb, but he spoke like a dragon. He exercised all the authority of the first beast on his behalf, and made the earth and its inhabitants worship the first beast, whose fatal wound had been healed. And he performed great and miraculous signs, even causing fire to come down from heaven to earth in full view of men. Because of the signs he was given power to do on behalf of the first beast, he deceived the inhabitants of the earth. He ordered them to set up an image in honor of the beast who was wounded by the sword and yet lived.

It is through this false prophet, this second beast, that the mark is established in order to worship the first beast.  Notice that he has two horns like a lamb. He is not aggressive, he’s very likely a world religious leader.  But he speaks like a dragon, giving pompous speeches, cursing God, and driving with the power through his voice people to ruin.

Any religious leader calling for a world government or bank or religion should be carefully watched and examined these days.

Is America Found in the Bible?

Scholars for years claimed that the United States wasn’t found in the Bible.  What an interesting statement considering how powerful, rich, worldly, sinful yet…