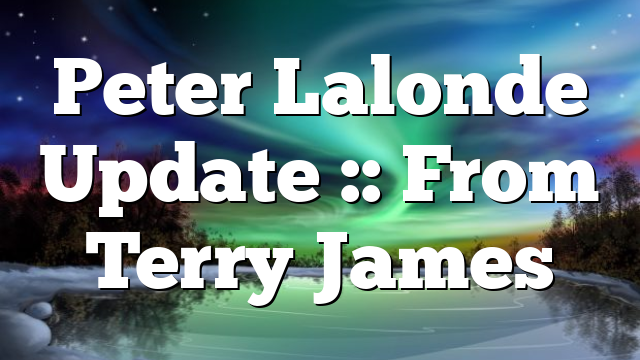 Peter and Paul Lalonde and their productions are among my fondest memories during my earlier days upon entering Bible prophecy ministry. Theirs were among several programs I wouldn’t miss on any given week. So, I’m more than pleased to be given notice that Peter is again ready to join the pre-Trib prophecy community of ministries.

In the seventies, Peter Lalonde became fascinated with the prophecies of the Bible.

In the eighties he began writing, ultimately penning a dozen books.

In the nineties he spent a decade co-hosting an international television program called This Week in Bible Prophecy with his brother Paul.

By the two thousands, they had produced eight feature films, including Left Behind: The Movie.

Lalonde remembers it this way: “We didn’t really do anything; it seemed like we were just along for one thrilling ride.”

Pointing out that the Bible contains 228,000 words of prophecy, not one word of which can be wrong, Lalonde notes, “if it’s supposed this important, it can handle our best challenge. That’s why it’s in there.”

His next venture is to put Bible prophecy on trial in a real courtroom with evidence presented to a global interactive jury in which anyone can participate. He shows jurors the evidence, and they cast their vote right on their desktop or phone in real-time as they watch.

“It’s not what I can show you about what I believe,” he says, “it’s about an honest presentation of facts that allow the jurors to decide what they believe.”

Knowing his excellence of presentation and past performance in laying out God’s prophetic Word, overlaid upon issues and events of these days so near the moment of Christ’s call to His Church, this is exciting news.

We should all look forward with great anticipation to what Heaven’s directive has for Peter Lalonde to present in these closing moments of this Age of Grace.

I, for one, will do so with intensive interest.

God says be Holy! How Do We Do That?