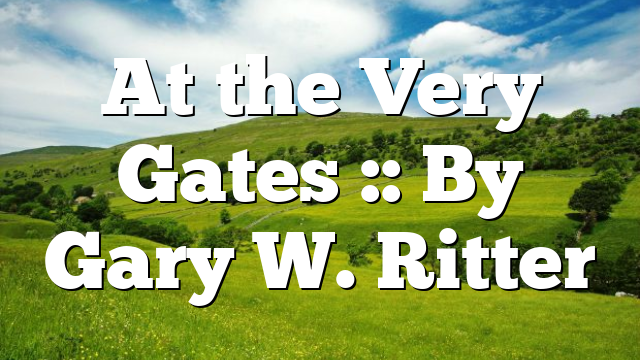 How close are we to the 7-year Tribulation? Let me ask this: How can we not be right at its cusp? Three of the Gospels describe what will occur in the final days: the very end of this world as we know it and the run-up to the time when literally all hell breaks loose on this planet.

If something is repeated twice in Scripture, God has said that it’s a sure thing. Joseph said that because Pharaoh’s dream was doubled and shown to him in two different versions (Genesis 41:32), nothing would stop its coming to pass. Since we have Mark 13, Matthew 24, and Luke 17 & 21 all showing us what Jesus Himself said would occur in these latter times, perhaps we should take note. Yet, incredibly, the church as a whole is asleep to the declaration from Jesus, who – one would think – might pull some weight. But no. Life goes on. The same messages are preached from the pulpit that were given ten, five, and even three years ago – not that they’re necessarily bad – however, in this day and age, they simply lull the congregations to sleep.

I know I’m not the only one shaking his head at this conundrum. Bible prophecy is very clear that end times will come and certain signs will accompany them. Scripture also declares that apostasy will rage and, obviously, because of the multiple admonitions to stay awake and alert – that many won’t. The astounding thing is that surely there are many good and true Christ-followers not looking up and expecting the return of Jesus. The only conclusion I can come to is that Satan has deceived them. Is that not concerning? If – what’s the percentage? – 90% of the church (or more?) isn’t concerned about coming judgment and what that implies, how about the rest of the world which has even less of a clue because they don’t have the indwelling Holy Spirit? Can you imagine the shock that’s about to hit this world?

In Mark 13, Jesus speaks to His disciples and answers their questions about the end of all things. He lets them know that the run-up to all that will happen is like the blooming of the fig tree. Leaves will first appear, and only then will fruit come because the season for it is near. Mark 13:28-31 provides this caution:

“From the fig tree learn its lesson: as soon as its branch becomes tender and puts out its leaves, you know that summer is near. So also, when you see these things taking place, you know that he is near, at the very gates. Truly, I say to you, this generation will not pass away until all these things take place. Heaven and earth will pass away, but my words will not pass away.”

Initially, Jesus in this prophecy says that much disruption will occur in the world. The surrounding chaos will include political and military turmoil along with great physical disturbances. Are we not seeing this in spades today? Russia-Ukraine. China-Taiwan. North Korea-South Korea. Israel-everybody else. America-red/blue. How about the incredible contrast of drought and unprecedented flooding in our country and elsewhere? Engineered famine is already striking because of the purposeful efforts of those determined to cause suffering. Plague or pestilence in the form of COVID, the harmful “vaccines,” and now the next plandemic. This is likely in large measure arising from the COVID injections in the form of VAIDS (Vaccine Acquired Immune Deficiency) that causes shingles and Karposi’s Sarcoma that doctors are told are Monkeypox blisters. Mark 13:5-8 says:

“And Jesus began to say to them, ‘See that no one leads you astray. Many will come in my name, saying, ‘I am he!’ and they will lead many astray. And when you hear of wars and rumors of wars, do not be alarmed. This must take place, but the end is not yet. For nation will rise against nation, and kingdom against kingdom. There will be earthquakes in various places; there will be famines. These are but the beginning of the birth pains.”

This is a worldwide phenomenon that Jesus warns of for everyone. However, then He gets more specific. I think it could be argued that those who will be brought to trials and their faith examined could apply to Christians standing firm against persecution. Suffering of this nature has been going on for many years by believers in the 10-40 Window. Why wouldn’t it get worse and expand as the end nears – even coming to America? Jesus details this in Mark 13:9-13:

“But be on your guard. For they will deliver you over to councils, and you will be beaten in synagogues, and you will stand before governors and kings for my sake, to bear witness before them. And the gospel must first be proclaimed to all nations. And when they bring you to trial and deliver you over, do not be anxious beforehand what you are to say, but say whatever is given you in that hour, for it is not you who speak, but the Holy Spirit. Spirit. And brother will deliver brother over to death, and the father his child, and children will rise against parents and have them put to death. And you will be hated by all for my name’s sake. But the one who endures to the end will be saved.”

Like many prophecies, this one by Jesus skips around in time and pertains to different audiences. After warning the church, Jesus zeroes in on Israel. God’s purpose for the 7-year Tribulation is two-fold:

As to #1 – Israel – the Lord will put His Chosen People and Holy Land through much difficulty to wake them up to His nature and glory. He’s telling them here in this passage that He’s given fair warning. What an awful time it will be! Mark 13:14-23 outlines this:

“But when you see the abomination of desolation standing where he ought not to be (let the reader understand), then let those who are in Judea flee to the mountains. Let the one who is on the housetop not go down, nor enter his house, to take anything out, and let the one who is in the field not turn back to take his cloak. And alas for women who are pregnant and for those who are nursing infants in those days! Pray that it may not happen in winter. For in those days there will be such tribulation as has not been from the beginning of the creation that God created until now, and never will be.

“And if the Lord had not cut short the days, no human being would be saved. But for the sake of the elect, whom he chose, he shortened the days. And then if anyone says to you, ‘Look, here is the Christ!’ or ‘Look, there he is!’ do not believe it. For false christs and false prophets will arise and perform signs and wonders, to lead astray, if possible, the elect. But be on guard; I have told you all things beforehand.”

The end of the chapter brings Jesus back around to His church – those to whom He has given His Holy Word, i.e., those who should have read it and heeded what it says. This is a pre-Tribulation Rapture passage in Mark 13:32-37:

“But concerning that day or that hour, no one knows, not even the angels in heaven, nor the Son, but only the Father. Be on guard, keep awake. For you do not know when the time will come. It is like a man going on a journey, when he leaves home and puts his servants in charge, each with his work, and commands the doorkeeper to stay awake. Therefore stay awake—for you do not know when the master of the house will come, in the evening, or at midnight, or when the rooster crows, or in the morning—lest he come suddenly and find you asleep. And what I say to you I say to all: Stay awake.”

The key verse for us in describing the chronology and events of these final days is in Mark 13:29:

“So also, when you see these things taking place, you know that he is near, at the very gates.”

Prophecy is in the Bible for a good reason. God wants His people to know what is to come. Given God’s Word, its clarity, and its fulfillment happening right before our very eyes, surely we as the church should understand the nearness of the hour. If Jesus tells us that when all these incidents occur and He is standing at the very gates ready to enter, shouldn’t we cry out for His mercy and deliverance? Shouldn’t we as His church be on our knees beseeching Him for the final salvation of our loved ones and others? Shouldn’t we be weeping at the state of this world and lamenting about its depravity? Shouldn’t we be saying with every ounce of our being, “Lord, this world is not my home; it’s an alien place I no longer desire to inhabit. Snatch me up from here and take me to the Father’s House!”?

I know some of us are responding like this. We understand the times because we’ve searched the Scriptures and found them true.

Where’s the rest of the church? They’re digging in and trying to turn back the clock.

Jesus is standing at the door, knocking. Will they let Him in?

The post At the Very Gates :: By Gary W. Ritter appeared first on Rapture Ready.

The Easter bunny didn’t rise… Christ most certainly did!