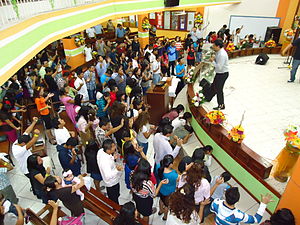 #Pentecostal spirituality is inherently bodily in that speaking in tongues as “the Bible sign” is an embodied practice of the Spirit.

John Kissinger [07/22/2015 8:05 PM]
That justification regeneration and the new birth are wrought by faith in the blood of Jesus Christ. In sanctification subsequent to the new birth, through faith in the blood of Christ; through the Word, and by the Holy Ghost. Holiness to be God’s standard of living for His people. In the baptism with the Holy Ghost subsequent to a clean heart. In speaking with other tongues as the Spirit gives utterance and that it is the initial evidence of the baptism in the Holy Ghost

John Kissinger [07/22/2015 8:54 PM]
hence strict holiness sanctification to create a clean heart for before the baptism with the Holy Ghost – not similataneous nor coperatively with sanctification but subsequent

Edwin Mendez [07/22/2015 9:32 PM]
I only know these verses superficially, but doesn’t Acts 2:17 and Joel 2:28 say that God will pour out His Spirit on “ALL” flesh? Meaning saved and unsaved? And therefore supernatural manifestations doesn’t necessarily mean salvation through the agent by which the manifestation occurs? Doesn’t Jesus reject those in Matthew 7:23 who performed signs and miracles and yet did not exercise saving faith found through obedience? Doesn’t satan mask as an angel of light? (2 cor 11). Can he not even mock prophetic utterences? I’m not saying that the gift of speaking through tongues is false. I’m saying that we need to exercise discernment when it happens. It might not be the Holy Spirit every time. Also gifts don’t seem to be a guarantee sign of acceptance into the Body. Correct me if I’m wrong. But please do so with scripture. If I proof texted anything, let me know because this is something that just came to mind as I read this post. Not really anything I did extensive research on so I could be in error. I would spend more time checking before post but I literally came from a 5 hour study of the word and my brain is a bit weary as I watch the Yankee game now. So please, correct me if I’m wrong.

Charles Page [07/22/2015 9:38 PM]
I’m not saying that the gift of speaking through tongues is false. I’m saying that we need to exercise discernment when it happens. It might not be the Holy Spirit every time. Also gifts don’t seem to be a guarantee sign of acceptance into the Body. -correct

John Kissinger [07/23/2015 1:38 PM]
it may be suggested that primitive is more baptist while primal sounds more Pentecostal 🙂

Charles Page [07/23/2015 2:01 PM]
as a primitive rule I adhere to the “evidence” for baptism WITH the Holy Spirit. The practice (rather than a one time event) of speaking in tongues is evidence that you have the baptism. It can be surrendered and there can be many fillings. (Scofield Reference Bible -one baptism many fillings)

John Kissinger [07/23/2015 2:03 PM]
Charles Page so you believe in re-filling? Rick Wadholm Jr you disagree with just part or the whole primal proposition?

Brody Pope [07/23/2015 2:05 PM]
I believe that you can be re-filled. Over and over again. You’re Baptized in the Holy Ghost once, and with that comes the evidence of speaking in tongues.

Brody Pope [07/23/2015 2:11 PM]
Re-filling is for all that have been baptized. I don’t believe you can be emptied, I do believe that being re-filled is a blessing to help you along your walk with Christ. Maybe along the way, you hit a rough patch and you need a little boost from the Lord, get re-filled.

FacebookTwitterSubscribe
Subscribe to receive all news to your email or phone: [wysija_form id="1"]
bodilyinherentlypentecostalspeakingspiritualitytongues

The Bible has stood as a beacon of hope

The Bible has stood as a beacon of hope and light and comfort for many generations. It is a great joy to search and…