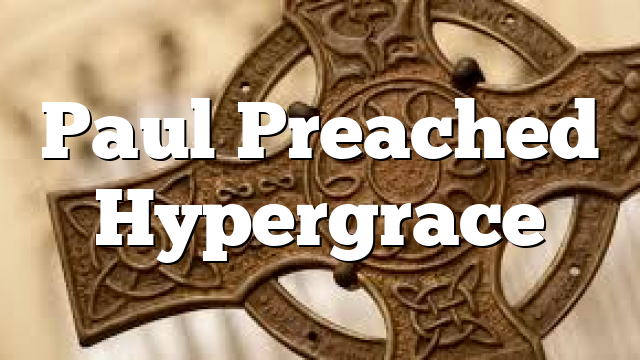 God’s super-abounding grace that saves us through Jesus’ death and resurrection, is, in fact, called “hypergrace” by none other than the Apostle Paul. The tricky devil is trying to make a dirty word that which saved us.

What is God’s hypergrace?

“Grace is the divine empowerment. It is the way his power manifests in the New Covenant often in the form of unmerited favor.

“In Romans 3-5, Paul builds the doctrine of Justification by faith alone ultimately upon the divine power of hypergrace (ὑπερπερισσεύω- hyperperisseúō ) which he brings to its finality in Romans 5:18-20. God’s power manifested in the death and resurrection of Christ which “Perisseuo’ed’ or superabounded over the power of sin and condemnation. Thus, resulted in justification and eternal life to all men who believe upon this good news.

“Now if our very salvation is attributed to hypergrace (Paul based his entire ministry on it in 1 Timothy 1:14), why is it such a hidden and controversial doctrine in the church?

“The devil has done an excellent job to cause Christians to doubt and fear the very power that saves them and made it into a dirty word. The Devil is so crafty that pulpits across the globe now preach against hypergrace…they preach against the very power that saved them. Astonishing. It makes me want to say like Jesus ‘you know not the power of God or the scriptures.'”

FacebookTwitterSubscribe
Subscribe to receive all news to your email or phone: [wysija_form id="1"]
hypergracepaulpreached